For the uninitiated, comic books are kid’s stuff with their talk of superheroes saving the day and fantastic illustrations that can stand alone as works of art. But for others, the comic book genre is one is the most beloved methods of communication in the history of the United States.

While this writer falls somewhere in the middle as far as that dichotomy is concerned, comic books and the promotion of diversity within the genre has been a cause at the very heart of The Shadow League’s charter from the beginning. Earlier this month, we were in attendance at the 2nd Annual Urban Action Showcase at the "Legends of Comics" panel discussion moderated by Regine Sawyer, owner of Lockett Down Productions and publisher of such titles as Eating Vampires and Ice Witch. Though I didn’t know it at the time, the panel lived up to its name as artists Grey Williamson (Harbinger, Batman, JSA Secret Files, owner of Carbon Fibre Media), Alitha E. Martinez (Iron Man, Fantastic Four, Black Panther, Voltron, Batgirl, Yume and Ever) and Mshindo Kuumba (Jaycen Wise, Ebony Warrior, owner of Advent Comics) have each been involved in the comic book industry for at least 20 years and each was forthcoming and candid in offering testimony about their experience in the comic book industry. Though the moderator did not phrase her questions for them to offer said testimony from a “Black” perspective, the fact that each is of African decent gave insight. They spoke about what they experienced back in the day, how far we have come, and how far we may still have to go regarding the inclusion of characters of African descent in comic books and working in the comic book industry as well. “Before I was in comic books, I was in childcare. I worked ten years in childcare,” said the Brooklyn-born Williamson when asked how he came to be involved in the industry. “I’ve done everything from group homes to working as a corrections officers working with everything from small children to youth who are serving life after being charged as adults.”

“I’m a child of the sixties and when I was growing up in a bad neighborhood we were surrounded by heroes. Heroes weren’t on TV or in books as much as they lived around us in a trying time. I ended up in corrections and realized that being in corrections wasn’t working. There was people that I grew up with that were in prison and I really couldn’t do anything for them. So I decided to get out of that. I could draw a bit and I thought that if I could get out of that and get into an industry like comics then I could tell stories that were reminiscent of the heroes I grew up with but in a dramatic fashion. Maybe kids could see the comics and get something out if for themselves. I could get more across to them in a book or through media than I could in a counseling session in lock up in a prison.”

For Alitha E. Martinez, the road has taken her through different trials and tribulations, thus, her viewpoint differs from that of the other panel participants. While some spoke of creative independence and fighting for diversity, Ms. Martinez was simply trying to provide for her family. 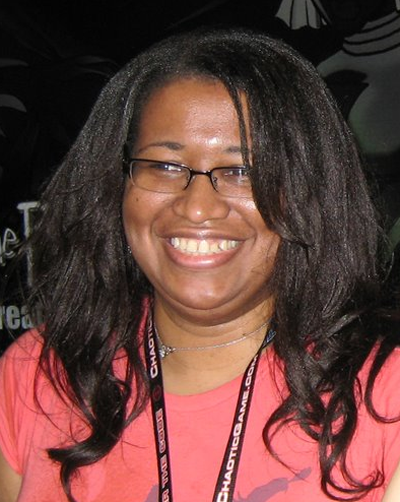 “For me, longevity comes at me from two sides. I do as I’m told, as quickly as I can, to the best of my ability. And I do that month after month with the thought that I have to feed my child and take care of my family.  My longevity comes from being able to adapt and the fact that the editors know they can get the work from me. They never ask me what I want to draw. They always say they like it but they always change the stuff in my work that I like. Then there’s the other side of me where I do my personal work and create my own properties, which I have very little time for. Out of a whole year I might get eight days. Sometimes I work twenty hours a day. I have to keep cranking it out. My longevity comes from me being able to adapt.”

Mshindo Kuumba is a independent comic book publisher who has been creating his own works of art for over 30 years.

“It’s interesting that you say that because longevity does not include burn out. It’s not a model for longevity,” said the artist in comparing his road to that of Alitha’s. “It’s servitude on so many levels. The reason why I’m like this is I started so early working for myself. Out of self-exploration comes longevity. If you expand your environment without allowing your environment to totally dictate your direction you have an experience that comes from your inner self. Like the sister said, she had a story to tell. Those are her stories through her particular vision. That’s unique because there is no lifespan on that. When you look at comic characters, or a series of comic characters, and take an amalgamation of comic characters, that quickly becomes dated. So, anytime I talk about my craft it’s always about the experience of the self.”

“I didn’t want to be caught serving too many masters,” he continued. “So I thought that, because my personality is so fiery, it was best to do things my way so that I wouldn’t have this conflict that I would have to get over because I am my own person. Out of all of that was born a particular vision that was unique. And in that was the longevity. I’ve done work that’s 20 years old that doesn’t look 20 years old. I always say knowing thy self is so very functional.”

When asked of his road through the comic book industry, Mr. Williamson segued a bit to express his empathy and understanding for the road taken by Ms. Martinez.

“There’s a job to be done and she disciplines herself to get the job done. She never allowed herself to get involved in the other things that stopped her from getting the job done because she’s got people to take care of. I’ve seen her work and it is technically compelling, which is something many of us in this industry are missing. Either we haven’t had the training or we haven’t had the discipline to study and learn the techniques. So, when I see someone like Alitha, who does what she does, I really respect that.”

“I came up at a time when everything was stacked against you and the only way that you would be able to keep doing it is you had to be more stubborn than your environment,” he explained. “I was raised in a stubborn atmosphere. She spoke about do as you’re told, and I understand that.”

Though Grey Williamson spoke in measured tones of wisdom, remaining silent and apparently in deep thought while the others spoke, any observer could plainly see that there was great depth and experience in him even in silence. When he spoke, that assessment was confirmed tenfold.

“When I first got into this industry I was kind of known as the artist who could draw anybody’s character. To the point where several artists and Marvel and DC constantly ripped me off for my stuff. I got hired by DC to redo their style guide for Batman so they could get their artists to draw him the way I did him. I never liked Batman. I think Batman is ridiculous. But I did it, and I did it the way they wanted me to do it, because that was my job.”

“But, periodically, in our business someone gets targeted. You think you’re just going to work in the business and everything is going to be cool. You might be sitting next to a guy who gets his job, meets his deadline, gets another job, meets his deadline, but there might be a guy sitting next to him who is doing the same thing but may have rubbed somebody the wrong way. Then he gets attacked. Truly, that’s just the way it works in the business. Our business is a place where you can get away with that. I had already been blacklisted and broke my blacklist when I started working beside Drew Posada. That whole blacklisting thing is why I’m still here.”

“It’s just the nature of many. At some point, somebody told me ‘You can’t do it.’ I used history. We come from a people who were told that you can’t do a thing or you’re not supposed to do a thing or you’re not supposed to be a thing. So, when they told me I couldn’t do something that I had endeavored to do, I did it out of a sense of responsibility. There were times when I hated drawing and I hated picking up a pen. I hated having execute designs for toys or draw comics for Marvel or DC. I hated it because there was so much nastiness that went along with it. I just wanted to draw cool stuff.”

Many in the audience sat in awe at his words. Though racism within the pages of major comic books has been written about multiple times at The Shadow League, never have we heard such honest words straight from the mouth of a successful comic book artist.

“I thought that I could just get a job and apply myself like with any other job,” he explained. “I’ve been working since I was 9-years-old.   So, I thought that I could just do that. Then reality set in. We ain’t all the same. Oftentimes, our enemy is an alliance between the people we think are our enemies and ourselves. The most pivotal point in the industry to me was when people I was cool with started calling my editors to tell them not to hire me or to try to get me removed from my books. So if my own people were trying to do that to me, then, for the others, you’re easy game for them. Because, they figure, you’re standing alone. If your own people aren’t standing with you they might as well get you out of the way and get somebody they can control better. Whether I expressed any revolutionary attributes or not, when they meet you they immediately make up their mind whether you’re going to be any trouble for them down the line.” We don’t know about y’all, but these people have opened our eyes to another side of the comic book industry that has seldom been spoken of aloud.

Check out part two of our coverage of the Urban Action Showcase’s "Legends in Comics" panel.