Tim Duncan is not boring. He just isnt interested in being interesting.

That was from a feature story I wrote on Tim Duncan in 2010, and it remains one of my favorite and most fitting lines Ive written about an athlete.

Duncan announced his retirement from the NBA last week, submitting a resume to the Naismith Memorial Basketball Hall of Fame that is a lock for induction ASAP: Five championships in 19 years with the San Antonio Spurs, three Finals MVPs, two league MVPs, 15 All-Star Game selections, 15 All-NBA and 15 All-Defensive Team nods.

But for everything Duncan is and was as an athlete phenom, superstar, legend, student, mentor, role model, rock, standard of excellence he has never been a polarizing figure. Duncan did not inspire legions of haters and trolls. Nor did he galvanize a fan base of ride-or-die followers who would swarm to his defense against whatever criticism came his way.

He didnt have to, because even the fans and media who didnt like Duncan still respected him. The same traits that made Duncan impossible to hate the unselfishness, the numbing consistency, the even-keel demeanor, the aversion to the spotlight, the commitment to fundamentals over flamboyance also made him one of the greatest basketball players of all time.

In turn, those traits kept Duncan from serious consideration as THE greatest basketball player of all time. Duncan somehow managed to leave an indelible mark on the game while being easy to forget.

Once upon a time, in an interview with Tupac Shakur, hip-hop journalist Sway Calloway described the stakes of the 2Pac vs. Notorious B.I.G. rivalry as Who rules the N**** Kingdom. Tupac agreed. He said that it was like an election between him and Biggie.

In basketball, in the 21st century, 2Pac vs. Biggie has been reborn as Kobe Bryant vs. LeBron James. Two potent and polarizing superstars, both fantastic and flawed, with passionate fan bases and even more passionate detractors. And then theres Tim Duncan who, despite his track record of success, is often left out of that never-ending debate between Kobe and LeBron as the hardwood ruler of his era.

Duncan is the Green Party candidate in this election, a long shot to take the crown even though he may be the most qualified to rule the kingdom. If Kobe and LeBron are Pac and Biggie, Duncan is Snoop Dogg; the constant presence, just as prolific and successful as anyone, getting it done while making it look effortless and not appearing to care if hes part of the argument. 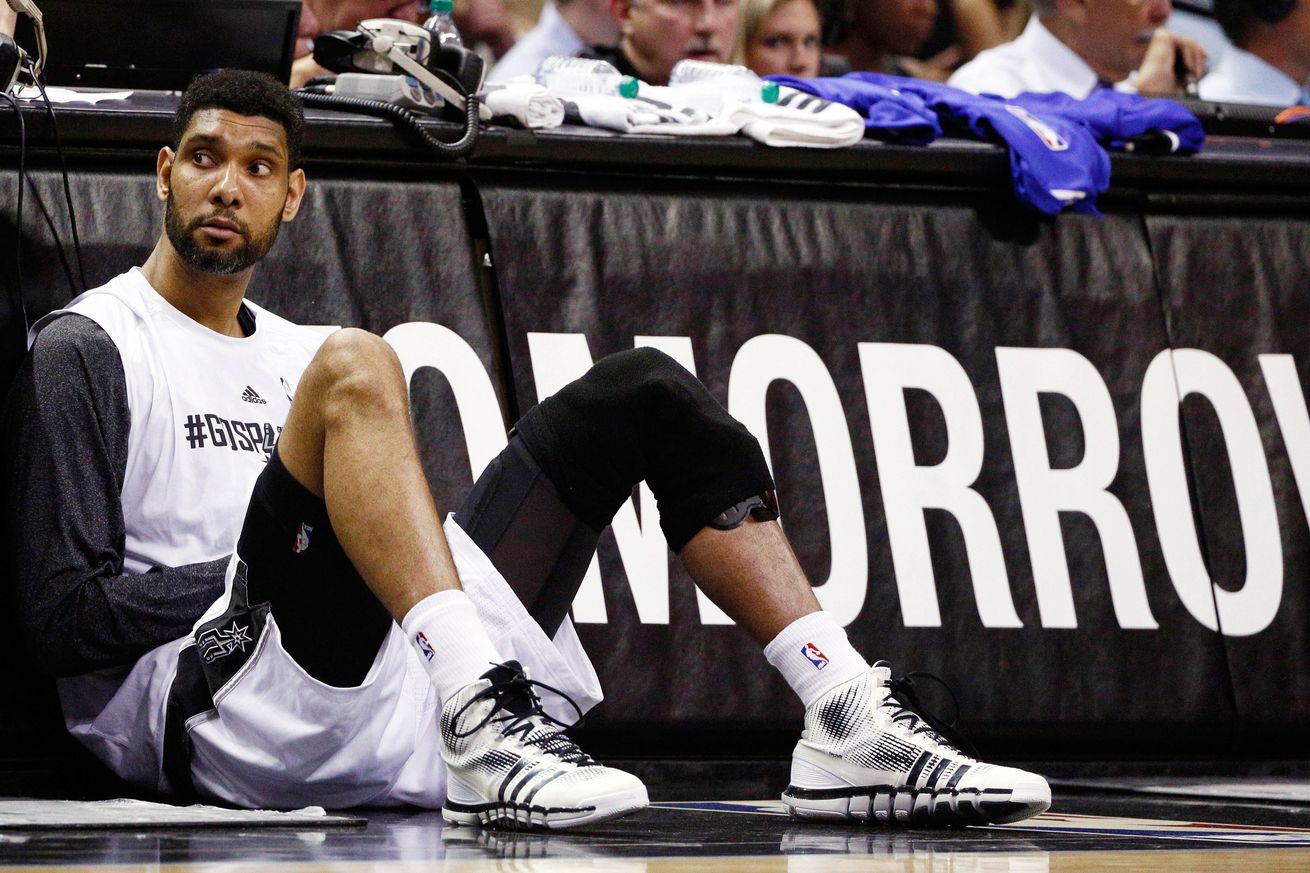 Everyone knows Duncan is great. No one seems motivated enough to bother arguing that he might be the greatest. Duncan himself seems unconcerned with how he is remembered. If the 10 or 15 best players in NBA history were to gather in a classroom, Duncan would be the one sitting quietly in a corner, rarely lifting his eyes from the book hes reading while others posture and pitch for attention and acclaim.

But it didnt have to be this way.There is one small act of chance that could have happened 19 years ago that, through no extra effort by Duncan, could have elevated his status today from top 10 to top dog. Duncan, you might recall, was almost a member of the Boston Celtics. And had Duncan accomplished in Boston what he accomplished in San Antonio, he could very well be talked about today not as the GOAT among power forwards, but the GOAT. Period.

Landing in San Antonio as the No. 1 pick in the 1997 NBA Draft was perfect for Duncan. Never one to seek out fame, Duncan went to the NBA equivalent of a small town to a franchise that already had a marketable and popular star named David Robinson. Duncan remained with that franchise for the duration of his career, with the ideal coach and the ideal front office who continued to acquire and develop teammates with which Duncan could win championships.

All of those things may not have fallen into place had Duncan gone to Boston. But what if they did?

The Spurs were not favored to win the NBA Draft lottery in 1997. Thanks in large part to Robinson being sidelined with a bad back and broken foot, the Spurs finished the season 20-62.Their leading scorer was 37-year-old Dominique Wilkins still good, but a shell of the Human Highlight Reel he once was. Along the way, head coach Bob Hill was fired and replaced by general manager Gregg Popovich, who had never before been an NBA head coach.

The Spurs were bad, but they were only the third-worst team in the league. The Vancouver Grizzlies had gone 14-68. The Celtics had gone 15-67. Boston was the team that, if you believe that NBA bosses fix Finals series and rig lottery drawings, was assumed to have the best shot at Duncan.The storied franchise in the major media market with 16 championship banners in their building was still recovering from the retirement of legendary superstar Larry Bird and the death of young All-Star Reggie Lewis.

Rick Pitino, one year removed from coaching the University of Kentucky to another national championship, was hired before the 97 draft to lead the Celtics into a new era. And Duncan who looked every bit the new-school version of Bill Russell in both ability and attitude would be the perfect player for Boston to rebuild around.

What if the lottery balls had bounced their way? What if Duncans NBA career had played out in Boston, where the media spotlight and constant comparisons to Russell would be unavoidable? Where his team would have natural rivalries with the New York Knicks and Los Angeles Lakers? Where hed put down roots a couple hours drive from the ESPN headquarters and a short flight from NYCs Madison Avenue?

What if Duncan had won five championships, three Finals MVPs, two league MVPs and all of those All-Star, All-NBA and All-Defensive nods while playing for what is arguably the NBAs marquee brand name? Whether Duncan was compliant in it or not, Boston would have automatically increased his media profile and bolstered his marketing appeal.

And we cannot underestimate how influential media and marketing narratives are in crafting an athletes image and legacy.Theres another line I wrote years ago that comes to mind today while considering Duncans legacy: Michael Jordan is overrated.

I wrote that in 2009 and still believe it now, knowing that overrated does not mean Jordan is not the best basketball player ever. With all due respect to Kareem Abdul-Jabbar, lets go with the majority of the basketball world and say MJ is in fact No. 1.

But even then, there is not an expansive gap between Jordan and whoever is No. 2. As I wrote back then: (Jordan) wasnt a perfect player. He isnt completely, indisputably, the greatest of  all-time. He isnt THAT much better than Magic or Bird or Oscar or Kobe or (save this space for LeBron once he wins some championships). He didnt score 50 at will; he had to work for it.

A lot of people, however, believe Jordan *is* that great. That he is *that* much better than everyone else. That he did score 50 whenever he wanted; that he hit every game-winner; that he was never outplayed by an opponent. Those beliefs are fueled in no small part by Nike, NBA promos and nostalgia. They also have a little something to do with the fact that Jordan played most of his career in Chicago, and that he had high-profile rivalries with teams in Boston, Detroit and New York.

A lot of people forget that Jordan was flawed, because hes been so successfully presented to the masses as flawless. But what if Jordan had been picked by Portland instead of Chicago in that famous 1984 draft? What if he didnt really care how his signature shoes looked, or how he dressed off the court? What if he turned down or was never offered some of those endorsement deals? What if he didnt want to do movies or music videos?

How would we view Jordan then? Six NBA titles, six Finals MVPs and five league MVPs could absolutely still be enough to earn Jordan his GOAT status. But would it be disputable? Would there be room at the top for a five-time champion with three Finals MVPs and two league MVPs in a more evolved and arguably more competitive era of basketball?

And what if the man with that resume also had the media and marketing advantage that comes with membership in the same fraternity as Russell and Red Auerbach, Bird and Bob Cousy? Had the lottery balls bounced a bit differently 19 years ago, it would certainly make for a heated argument.

As it stands, though, Tim Duncan will just have to settle for his spot as one of the greatest the game has ever seen. If hes even interested in that.