The first week of the National Football League officially wrapped up last night with a Monday Night Football double-header featuring the Pittsburgh Steelers v. the Washington (Racial Slurs), with the San Francisco 49ers hosting the Los Angeles Rams following it. Most people were waiting to see their favorite teams square off after a long summer without football, others couldn’t wait to get their Fantasy Football on.

I was waiting to see who was going to do what.

With all the drama and debate surrounding the one-time quarterback battle between Robert Griffin III and Kirk Cousins down in D.C. last year, I wanted to know who actually was going to show up now that RGIII had his own squad in Cleveland and Cousins was given the reins in Washington.

My Shadow League colleague J.R. Gamble spoke with CBS Sports analyst and former NFL quarterback Rich Gannon at CBS Sports Media Day about what he expected to see from Griffin in Week 1 and, judging from his performance last night, Gannon seems damn near clairvoyant in retrospect.

“There’s no question, he has the arm talent, he has the athleticism,” said Gannon. “A Lot of good qualities that you like at that position. The area where he has struggled is functioning as a QB in the pocket and too many teams now set the edge on him, make him sit in there, make him function on third-down, make him function in the red-zone and make him get through his reads and his progressions and thats the one thing he has not shown the capacity to do. Now had he been put in a situation where hes got a great team, great defense with a great running game , then maybe he can do something. I just think that team is so depleted right now of talent. I worry if hes even going to still be playing in Week 4 or will he be hurt by then.”

Griffin’s stats against the Philadelphia Eagles, 12 for 26 (four dropped passes), for 190 yards and no TDs, say he still hasn’t fixed the accuracy problems that dogged him in Washington.

Yes, he can throw it a country mile. But throwing it with consistent accuracy on slant routes and over the middle appear to be where he struggled. His 5 carries for 37 yards says he still has the wheels many thought were long gone.

But his refusal to slide, and his subsequent injury in the 3rd quarter, makes me wonder whether or not he realizes how fragile he actually is. He now has a broken left clavicle and will be reevaluated in three weeks.

Everybody knows the Cleveland Browns do not have a good team. The offensive line is Sponge Bob-porous and the running game was a below average at best. All and all, Griffin is still making the same mistakes and now the Browns have an issue at quarterback going into Week 2 as Josh McCown prepares to start.

Things didn’t look too bad for QB Kirk Cousins in the 1st quarter, leading the (Racial Slurs) on a nine play, 54-yard drive that resulted in a field goal, and a five play, 29-yard drive for a field goal following a pick by the Washington defense. But the Steeler front seven made absolutely sure that Washington would not be running the ball very much last night.

They only ran the ball 12 times all game. The result? Cousins passed 43 times, completing 30 of them for 329 yards. But he also threw two picks and could not get the ball in the end zone.

Though it’s only his first week of action, Cousins, like RGIII, also appears to be bringing some awful habits into the new season. Prior to leading the ‘Skins on a run that resulted in a Wild Card berth last season, the major knock against Cousins has always been his catastrophic habit of throwing the ball to the other team. In six games of action, he threw 10 TDs and 9 INTs with a record of 2-4 in 2014. 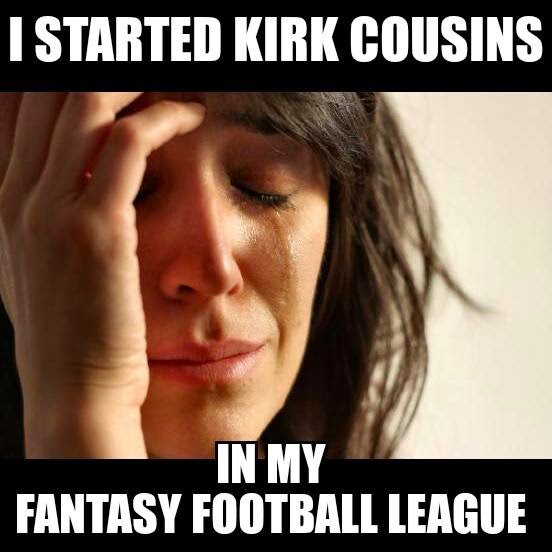 Last year Cousins was vastly improved after he supplanted Griffin following his injury in the preseason; 29 TDs and 11 INTs in his first full regular season of work. It’s early, and I cannot stress that enough, but Cousins’ flaws during the 38-16 shellacking on Monday Night Football were the very same one’s that scouts mentioned prior to him being drafted four years ago. That is the very definition of regression.

They said he was a game manager who thrives on quick reads, who struggles with going through progressions and you don’t want him throwing the ball too much because eventually he will try to force a few in there and get picked. And that’s EXACTLY what happened last night.

After all the fuss that happened last year, and the fact that Jay Gruden chose Cousins over RGIII to the chagrin of team owner Daniel Snyder, this could be an indicator that Gruden’s job may just depend on Cousins returning to last year’s form and leading them to the playoffs.

And that’s still very much a possibility. After all, the Steelers are consistently good and everyone doesn’t lay the lumber like the Pittsburgh’s defense.

Washington will face the Dallas Cowboys next Sunday in what could be classified as a “must-win” situation, as both teams can’t afford to go down two games against divisional opponents.  While Browns coach Hue Jackson’s job isn’t on the line because of RGIII, if Griffin doesn’t show and prove upon his return, which is projected to be Week 8, he may not get another chance to start in the National Football League.

I’m actually hoping one of them, or both them, balls out of control.  I’d hate to see all those editorials arguing the merits of one over the other completely go to waste.