In the middle of my mourning the death of Prince (which is still continuing), Beyonc dropped Lemonade, her sixth LP with a visual movie, which, depending on your viewpoint, is a love letter to black women, a story of betrayal and infidelity, a protest film on the destroying powers of patriarchy and white supremacy, and/or a genius business decision.

Was this extended video movie meant to shame the arrogance of Rachel Dolezal or Iggy Azalea, or the appropriators of black cultural hairstyles like Kim Kardashian and Bo Derek?

Is it for white girls with plastic butts and silicone lips? For exotic chicks that are anything but black in hip-hop videos?

For names forgotten in roll calls like Renisha McBride and Aiyana Jones? For any black woman that has had to play the background when they were the smartest person in the room?

For black women that are cut out of history? Was it for the white girls in Rakims Dont Sweat the Technique video?

For every little dark-skinned boy who says hell only date redbones? For every dark-skinned girl that prays for a baby with good hair?

Beyonc packs in 60 minutes of imagery and words about the historic neglect and the stunning resolve of black women. It can be too much. The imagery courtesy of the brilliant eyes of Khalil Joseph and Melina Matsoukas is alternately beguiling and disturbing.

Theres Beyonce immersed in water while watching herself sleeping. Theres talk of generational curses, of marrying a man like your father despite the best of intentions.

Theres the passing down of the notion of manhood as defined by men who werent allowed to protect their women during slavery.

Theres both hope and pain for the future with images of actresses Quvenzhane Wallis and Amandla Stenberg, who both had to grow up quick because of racist taunts, and the mothers of black men killed by police.

As tennis star Serena Williams twerks beside Beyonce, it’s the same pose that Beyonce and Jay-Z had in the video, Upgrade. Beyonce sat in a throne while Jay-Z’s words came out of her mouth, while another image of Beyonce twerked beside him before the image in the throne turned into Jay-Z. 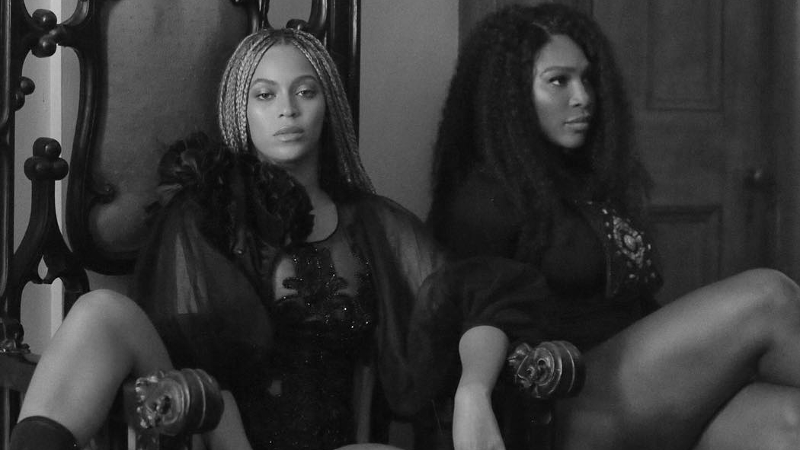 It’s also the same pose that Serena had on the cover of Sports Illustrated, when some readers criticized the magazine for making her sportsperson of the year. They preferred a horse, remember? Serena sat in a throne on the cover with one leg thrown over the arm of the chair.

In the Lemonade video, they’ve seemingly changed places. Beyonc sits in the throne as Williams twerks.

Their changing positions represent two black women at the very top of their fields, both trying to break out of the boxes they have had to create for themselves that require perfection at all times to avoid ridiculous critiques.

Theres much contradiction in the entire movie; at the same time that the spoken words of Somali-British poet Warsan Shire are enriching, Beyonces lyrics are grippingly violent.

Are the antebellum frills, Mardi Gras Indians and allusions to African deities represented in the film our Sankofa? Or is it Beyoncs? Is it a reminder to us or to herself that below her long blonde-highlighted tresses there’s Negro hair and Michael Jackson nostrils?

Whether its a metaphor for the neglect and disrespect black women face, or theres some shred of truth about her marital strife, she takes a bust-your-windows approach to infidelity in marriage trite in its Ill-eff-a-b-up philosophy for heartbreak.

If her mother believed that every fifteen minutes another man is coming after a hang up with heartbreak, surely she shortened that time to two minutes for Beyoncs phone to ring. But Beyoncs trying to be like one of us, or what she thinks is one of us, something shes been trying hard to do since she broke with Destinys Child.

Certainly, her ticket prices are not anything ordinary people can feel. She has always alternated between attempting to be relatable to everyday struggles and being a diva that you need to bow down to. Her struggles to change as an artist often feel empty when it’s tied into marketing.

Whats bold in her attempt at ordinariness is the suggestion that celebrity marital strife can be outed (even if it’s fiction) in the midst of the marriage rather than after it. She had no problem suggesting betrayal as a single woman with songs like Irreplaceable and Ring the Alarm. But as a married woman, Jay-Z and Beyonc have worked hard as a power couple to create a united front for the public. Even the illusion of imperfection is a radical move when their image is tied up in their success.

Or maybe it’s just a condescending move to her fans.

Here’s what’s clear: Beyonc has introduced an increasingly alliterate society to poets like Warsan Shire (For Women Who are Difficult to Love, The Unbearable Weight of Staying (the End of a Relationship), Nail Technician as Palm Reader) and feminist novelist Chimamanda Ngozi Adichie.

And maybe for the particularly sheltered, she introduced some of the insightful words of Malcolm X.

Whats clear is her cultural impact right now is unparalleled and that she makes smart decisions with the people she hires.

And the depth of her precedent setting business savvy runs deep. She commands, in high demand, what Lil Kim rapped about: money, power and respect.

For Beyonc, her internal struggles, from finding freedom to removing the mask, is big business.

Since she broke away from Destinys Child in 1997, she understood the importance of collaborating with talent and experience. On her debut Dangerously In Love, she collaborated with an eclectic group, including Luther Vandross, her then-friend/boyfriend Jay-Z, Sean Paul, Big Boi and Missy Elliott. Columbia Records was reluctant to release the project, claiming that she didnt have any hits on it.

The album debuted at number 1 on the Billboard 200 chart. Her duet with Jay-Z was the hottest single of the summer.

Through her first album she learned about album leaks. Several of the songs had leaked online. A portion of albums often leak from the physical run from the printing plant to the distribution center to retail outlets. Columbia moved the release date up two weeks to prevent it.

By her fifth album, she found a new formula to gain buzz and prevent bootlegging in an age where social media file-sharing and digital piracy was part of a large market for getting music the element of surprise.

Its a practice with a name: windowing. Windowing is the practice of briefly restricting new albums to certain online outlets before expanding to a wider release borrowed from the movie business where some films get an early release in a few major cities before going nationwide.

Her self-titled fifth album dropped at midnight on Friday the 13th in December, 2013 with no previous publicity or warning.

On a tight ship, everyone, including extras in music videos, signed a non-disclosure agreement to keep everything a secret. People were deleting Bible apps to make room for the new album. According to Itunes, 617,200 albums sold in the first three days. It was the fastest selling album ever. The project instantly shot to No.1 in more than 100 countries.

She made Target mad. How mad? They announced they wouldnt carry physical copies of her album, because they claimed Itunes releases would impact demand and sales projections.

Between June 1, 2013 and June 1, 2014, she earned $115 million for all of her business ventures. She was the first woman to debut at number 1 for five albums in a row. By 2014, she beat out Oprah for the Forbes Top Ten Most Powerful Celebrities. She also beat her husband, who was sixth on the list.

Its likely their pseudo marital strife is fabrication to feed the rumor mill.

And theyre feeding the beast.

After the showing of the visual album on HBO at 9pm last Saturday, at 10pm the album was sold exclusively on Tidal, her husbands music streaming service in which she is a partner, for the next 24 hours. According to estimates from Sony music, she sold 200,000 copies for the first day.

Beyonc and Jay-Z are fighting all the way to the bank.

Her attempts at ordinariness are always untouchably fabulous.