It really doesnt matter, because history has a way of balancing out the scales, as do the baseball gods. And in terms of ring-rocking and raiding as a manager, Franconas always been blessed.

In terms of success as a person and his ability to understand the plight and perspectives of all people, again, Francona is top notch.

While he is yet to get his full props as a manager, it could happen this season if he gets Cleveland to the elusive promised land. As a person, however, he commands the full respect of everyone throughout the game. To his players, Franconas considered one of baseballs hidden gems, who is shining brightly and initiating positive direction on and off the field. 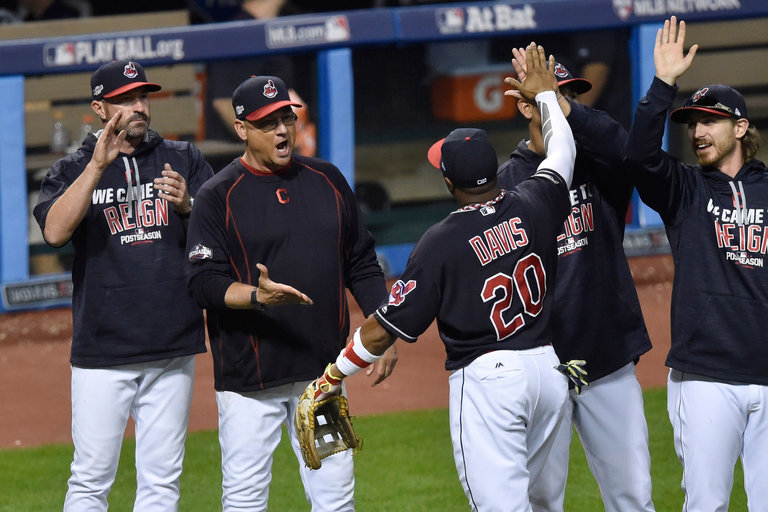 Veeck was the former Cleveland owner, baseball pioneer and promotional genius that purchased the team in 1947, won a title in 1948 and then financial problems forced him to sell the talented squad in 1949.

When Indians president Mark Shapiro and general manager Chris Antonetti fired skipper Manny Acta on Sept 27, 2012 following the teams 3rd 90-loss season in four years, they were looking for a guy who could accomplish what seemed to be an improbable feat; get Cleveland back to the World Series and quench the title thirsts of one of baseballs oldest and proudest franchises.

They hired the curse-breaker himself, Francona, one year after he left the Boston Red Sox where he won World Series titles in 2004 and 2007, breaking an 86-year championship drought known as The Curse of the Bambino.

The Indians have lost the World Series three times since 1948 — in 1954, 1995 and 1997. And it had been 15 seasons since Cleveland last tasted the postseason, before Francona got them back there in his first season in 2013. It was a 92-win gem that got the city amped up about the possibilities of The Tribe rolling again. Francona took home AL Manager of the Year honors, but he was just getting started.

In four seasons, Francona has transformed an Indians team that ranked 21st in hitting and 29th in pitching upon his arrival and has brought them within two games of a World Series appearance as they lead the Toronto Blue Jays 2-0 in the 2016 American League Championship Series.

Francona has a talent and a way with players, plus a feel for the game, that many managers dont have. The way he inspires his players and the way he gets his team to buy into his winning philosophies is special.

He also has pedigree. His father Tito Francona played outfield for a few MLB clubs from 1956 to 1970, including Cleveland from 1959 through 1964.

Francona’s not bad with the money moves in big games either.

With all that in mind, Cleveland is hoping Francona can shock baseball again and end the citys 58-years of World Series futility.

I wouldnt bet against him. On or off the diamond.

As he brilliantly navigates underdog Cleveland through the AL gauntlet of impressive teams, Francona cant help but study, analyze and value the social climate of our country and how it affects the men who work for him and the country he so deeply loves.

Instead of taking a knee during the National Anthem, the Indians, inspired by Franconas moments of consciousness decided to move in another direction and created The Larry Doby Youth Fund.

Doby was the first African American to play in the American League, making his debut with the Indians on July 5, 1947, just months after Jackie Robinson broke in with the Brooklyn Dodgers and hogged all of the barrier-breaking shine.

Francona sees the fund as “putting your money where your mouth is.”

The power move raised $1 million in a matter of days to help disadvantaged children in Cleveland and curb youth violence.

(Statue of Larry Doby that stands outside Progressive Field In Cleveland)

According to Cleveland.com, Francona has been troubled by the clashes between minority youths and police throughout the country. He understood the protests that some professional athletes have made during the playing of the National Anthem, but he felt there were other ways to help.

“I’ve been watching things happen (with) the National Anthem,” said Francona. “I’m probably getting old. I started thinking about some things. I ruminated.”

Francona talked to Rajai Davis and Coco Crisp, two of the African American players on the Indians about what they thought.

Considering all that’s going on in sports, especially in the NFL, we wanted to put action to what we really wanted to do,” Davis, who’s a decade in the game deep, added. “We wanted to help the community, which is Cleveland. Talk is what they say, it’s cheap, without action. It’s like faith without action is dead. You actually have to put some action to what you say in order for it mean anything.”

Donations poured in from “every single player, every coach, every trainer, every clubhouse guy donated,” said Francona. “Then Chris (Antonetti, Indians president of baseball operations) and the front office did too.”

That got the total to an estimated $500,000. Owner Paul Dolan and minority owner John Sherman pushed the number to $1 million.

Francona said the idea was born out of simply wanting to help.

“I mean these kids in the inner city have no chance,” he said. “How are they supposed to be the next generation when they’re not getting an education or they’re afraid to go to school because they might get shot? Somebody has to start caring about them. I don’t understand it. Maybe it was talking to the policemen in Chicago. It has to get better if we’re going to get better.”

The money will be placed in a trust fund and the Cleveland Foundation will administer it. Dolan and a committee of five players will determine how the money is spent.

Francona describes it as the “…proudest moment in my baseball life.”

Baseball had received a lot of criticisms because none of the African-American players have joined the Colin Kaepernick-inspired protest during the national anthem.

In the spirit of Jackie Robinson, who protested through his excellence on the field and the brave and dignified manner in which he conducted himself, Francona decided to take the first step in showing that MLB also supports a better America and is not totally oblivious or insensitive to the fractured relations between police and civilians.

Nor is he unmoved by the deeply-rooted problems in America.