I told you after Tom Brady smashed The Steel Curtain in the AFC Championship that Roger Goodell had no choice but to hop back on the Brady bandwagon now that everyone else has. He was Patriots enemy No. 1  and everybody else’s hero when he handed Brady that Deflategate suspension, lost the appeal and then was eventually vindicated as the suspension upheld.

Many Brady appreciators asked how Goodell could dare punish Americas sweetheart for an infraction that on the surface appears minor. Goodells job as commissioner is to preserve the integrity of the game no matter how minor the infraction. In this case, he didnt see Bradys deliberate actions as within the integrity and rules of the game and he showed guts and acted on what was sure to be an unpopular decision. And the NFL had nothing to gain by going after one of the lauded and legendary faces of its billion dollar business.

After so many years of erratic execution — one minute hes an enforcer and the next hes the second-chance man — Goodell finally stuck to his guns and ignored the popularity of his decision and just made one. It was actually refreshing, but as usual has backfired on him.

Brady’s run to another Super Bowl has thrusts him back into the spotlight and added a bad boy image that only enhances his legend.

Brady said he was innocent. Told the NFL to kiss his grits when they asked for his cell phone, took his suspension and came back like Joe Montana, fourth-quarter for the c’hip. He’s brash and bold as ever. 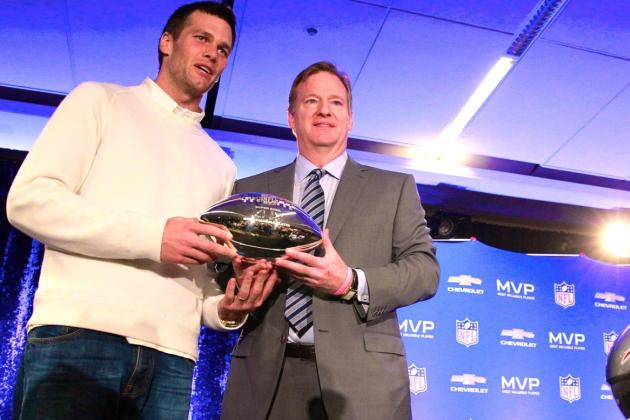 Meanwhile, Goodell,  who jumped the gun on Bountygate and missed the ball on the Ray Rice domestic violence scandal and basically called the winningest QB of our generation a cheater, now says on The Herd with Colin Cowherd, It would be an honor to hand Brady the Super Bowl trophy.

While Goodell doesnt have to bash Brady or remind everyone of  the golden boy’s infractions, he doesnt have to co-sign a guy that he accused of cheating the game to gain an advantage just a New York minute ago.

Goodell doesnt have to go there. He is the commissioner and he made a call. His job is to protect the sport, he has no personal gripe with Tom Brady. If anything, he’s showing a desire to be accepted into the boys club again. Hes been on Pats owner Robert Krafts crap list for awhile now and frankly, Goodell is probably tired of being an outsider as the Pats bask in the glory of the juggernaut they have built under the Killer Bs.

As I said before, Goodells pimp hand is NOT strong.

I know. How about Donald Trump for NFL Commissioner? Since this country is all about going against the grain these days, thats probably a job our President is perfectly suited for. You know his boy Brady, who publicly continues to endorse Trump,  would definitely co-sign the move.