The 2016 Terrell Owens, equipped with freakish athleticism, unpredictable mood swings, kiss-my-grits speed and deadly mitts, stepped up when the New York’s back was against the wall and came through with a performance worthy of all of the extra theatrics and antics that come along with OBJ when hes having fun playing the game.

The first half of the Giants 27-23 win over the Baltimore Ravens wasnt promising for OBJ or his future Hall of Fame QB Eli Manning.

Both bad boys were operating at a mediocre level, which before Sunday, had become a bit of a habit. After winning the first two games of the season, a major reason for NY’s three-game slide entering the game against B-More was the lack of production from its two best players.

On Sunday, it started out all bad. The offense looked incapable of moving the chains. You would have thought Ray Lewis and Ed Reed were balling for the Ravens or something.

But just when this season was shaping up to be a duplicate of last year’s bummer and the Giants were facing the potential of a four-game losing streak, OBJ hopped in the phone booth, threw his supreme player cape on, Eli turned off the blank looks of confusion and started airing it out in typical Manning fashion.

After losing a critical fumble early, Beckham had to briefly leave the game and go into the locker room following a hip pointer he suffered on an attempted catch. The reports listed his return as questionable, but obviously, despite all the “extra” stuff that surrounds Beckham, his toughness passed the smell test yesterday.

Beckham returned with the wheels to burn and the focus of a samurai swordsmen.

Then he rekindled his love-hate relationship with the kickers net on the sidelines.

And when he caught the game-winning TD on a 4th and 1, where he blazed over the middle and left the B-More defense licking the bottom of his cleats, it was official that he was finally having fun again.

The helmet came off, exposing his luxurious, blonde-dyed hair. The 15-yard penalty was of no consequence as Beckham was back in the spotlight where he has to be to feel worthy. He gyrated and ran along the sidelines shouting and screaming who knows what? 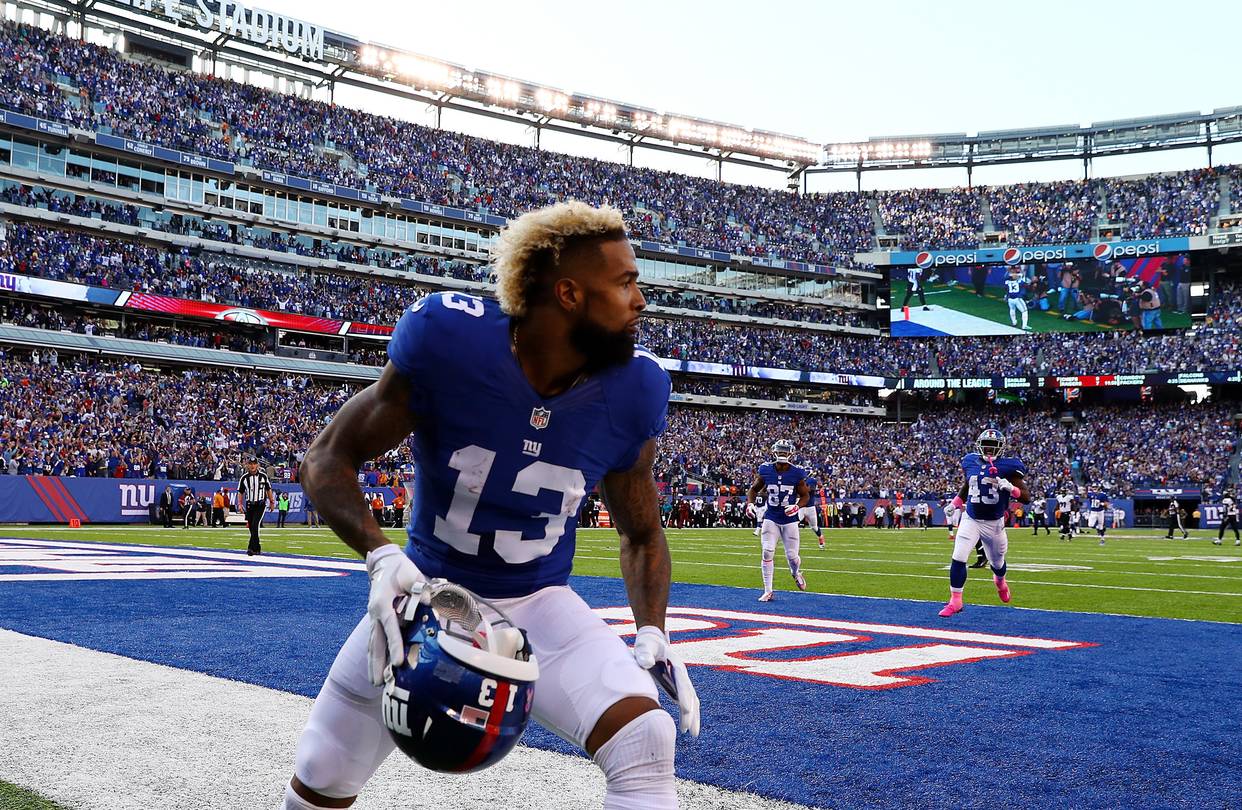 And when he plays like he did on Sunday, racking up 222 air mail yards,124 of which came after the catch (the most by any player this season, according to ESPN Stats & Information), nobody really cares what he does.

He can do any dance he wants, have as many emotional malfunctions and schizophrenic behavioral episodes as he likes. As long as he keeps the Big Blue machine in playoff contention and walks that funky, dangerous, risky, riveting and incomparably electric talk that he talks as one of the NFLs must-see, main attractions.

After a slow start to the season, when Beckham didn’t score in any of the first four games and had a career-low three catches for 23 yards in a Week 4 loss to the Minnesota Vikings, he has caught three touchdown passes in his past two games.

Teammate Victor Cruz summed it up best when describing the performance and posture of his teammate Beckham. He didnt call him crazy but he did imply that Sundays game, for the first time in a while, encompassed everything the Giants flashy pigskin-snatcher embodies.