Many of the people who are alive today sometimes forget about the mammoth shoulders upon which we all stand. When it comes to the National Basketball Association, every single player of African descent stands on the broad shoulders of Earl Lloyd. Drafted by the Washington Capitals, just ahead of Sweetwater Clifton and Chuck Cooper,  Lloyd first starred as a premier small forward West Virginia State College (Now West Virginia State University) from 1946 to 1950 and was a two-time All-American. He passed away on Thursday at his Tennessee home. He was 86-years-old.

“The NBA family has lost one of its patriarchs,” NBA commissioner Adam Silver said in a statement. “Earl Lloyd, the first African-American to play in an NBA game, was as inspirational as he was understated. He was known as a modest gentleman who played the game with skill, class, and pride. His legacy survives in the league he helped integrate, and the entire NBA family will strive to always honor his memory. Our deepest condolences to the Lloyd family.” 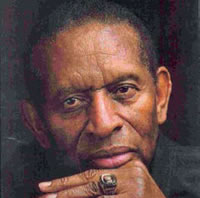 Nicknamed The Big Cat, Earl Lloyd would lead the NBA in personal fouls and disqualifications in 1955.

Lloyd was key in helping the Syracuse Nationals win the 1955 NBA title. Standing 6-foot-5, Earl Lloyd averaged 8 points and 6 rebounds in 560 regular season games and coached the Detroit Pistons in 1971-1972. He was inducted into the Basketball Hall of Fame in 2003.  Though Earl Lloyd’s numbers seem relatively modest when compared to those of LeBron James, Wilt Chamberlain and Michael Jordan, none of their high-flying, Herculean efforts would have ever been possible without his contributions.

According to NBA.com, Earl Lloyd ranked 43rd in scoring with 4,682 points when he retired in 1953-1954. Known more as a defensive stopper, Lloyds best season scoring season was in 1955 when he averaged 10.2 points and 7.7 rebounds for the Syracuse Nationals during their championship run. He and Justin Tucker would be the first NBA champions of African descent.