People grow old, eventually die and slowly fade from the immediate thoughts of the living.

However, legends like Yankees immortal Yogi Berra — who died of natural causes at his home in New Jersey on Wednesday according to Dave Kaplan, the director of the Yogi Berra Museum — live on as constant reminders as the embodiment of greatness and life-long servitude in their respective trades.

There are great ball players and Hall of Fame ballers and then there are institutions; those men whose impact has transcended the playing field. Lawrence Peter Berra’s 69 years of baseball service makes him irreplaceable, unforgettable and permanently iconic to the fabric of the sport.

Legendary manager Casey Stengel predicted that Berra would be one of the games great catchers in the mold of his predecessors; Mickey Cochrane, Gabby Hartnett and Bill Dickey.

Back then, just having a manager believe that his skills were up to par for life beyond sandlot ball was a come up for Berra.

He’s come a long way from that  little boy born to Italian immigrants and balling in “The Hill” in St. Louis. He’s an example of what America should always be. One generation removed from an Ellis Island arrival and he makes a big enough impact on American culture to receive praise from the POTUS.

In response to Berra’s death, Yahoo.com reports that Obama called him an “American original.”

“He epitomized what it meant to be a sportsman and a citizen, with a big heart, competitive spirit, and a selfless desire to open baseball to everyone, no matter their background,” Obama said of Berra. .

New York authorities ordered all flags across the city to be flown at half-staff in honor of the revered catcher.Obama hailed Berra — whose famous utterances included the inspirational never-say-die idiom, “It ain’t over ’til it’s over” — as an “American original.”

I’m sure young heads are asking, “Why all the hoopla about a guy who played in the dark ages ?”

Sure Berra played back in the days and even served on a gunboat supporting the D-Day invasion in 1944, but he is just as popular now as he was when he was a cornerstone of early Yankees dynasty teams, playing in more World Series games than any major leaguer and winning three MVP Awards during his Yankees career which spanned 1946-63.

Berra was diminutive in size but strong and well-built and larger than life to the millions of Yankee fans across the globe. He played in a Golden Era of Yankees baseball and was able to shine among the giants, despite playing with titans like Joltin Joe DiMaggio, Mickey Mantle and Whitey Ford. He was the last prominent, living, authentic connection that modern day fans had to a past era — which now becomes even more myth with the loss of the the Yankee great. 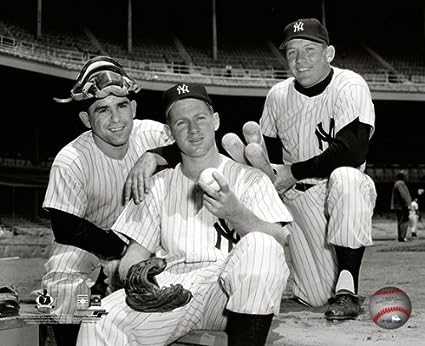 Berra made 15 straight All-Star appearances and with the free-swinging, back-stopper doing his thing, the Bronx Bombers made life a living hell for Jackie Robinsons Dodgers. The loveable, rocket launcher hit 358 career homers while appearing in 14 World Series and claiming 10 c’hips during his 18 seasons in the Bronx.

In addition to being the guy who the character Yogi Bear was named after in 1958 (which gives modern folk an idea of Berra’s Grade A celebrity status at the time) Berra was famous for his comical Yogi-isms.

He would make statements that sounded awkward but actually (years later) made total sense and now roll off the tongues of the world’s most intellectually-gifted sports junkies every day.

Berra just never perfected the Kings English and what he meant wasnt always what he literally said.

Eight of his quotes can be found in “Bartlett’s Familiar Quotations.”

“It ain’t over ’til it’s over” is probably the most popular.

The fact that Berra, an intelligent and strategic ball player was generally perceived to have a simple mind is part of the complexity and captivation of the winningest catcher and most beloved figure baseball has ever produced. It also led to his extreme popularity and eventual prominence in baseball lore.

He was no Bob Ueker side show. His silliness and reputed lack of intelligence was only surpassed by his feats on the field and his relationship with Yankees Nation. Bruce Weber explained the relationship between the two beautifully in nytimes.com yesterday.

That he triumphed on the diamond again and again in spite of his perceived shortcomings was certainly a source of his popularity. So was the delight with which his famous, if not always documentable, pronouncements somehow both nonsensical and sagacious were received.

You can observe a lot just by watching, he is reputed to have declared once, describing his strategy as a manager.

If you cant imitate him, he advised a young player who was mimicking the batting stance of the great slugger Frank Robinson, dont copy him.

When you come to a fork in the road, take it, he said, giving directions to his house. Either path, it turned out, got you there.

Nobody goes there anymore, he said of a popular restaurant. Its too crowded.

Whether Berra actually uttered the many things attributed to him, or was the first to say them, or phrased them precisely the way they were reported, has long been a matter of speculation. Berra himself published a book in 1998 called The Yogi Book: I Really Didnt Say Everything I Said! But the Yogi-isms testified to a character goofy and philosophical, flighty and down to earth that came to define the man.

Berras Yogi-ness was exploited in advertisements for myriad products, among them Puss n Boots cat food and Miller Lite beer but perhaps most famously Yoo-Hoo chocolate drink. Asked if Yoo-Hoo was hyphenated, he is said to have replied, No, maam, it isnt even carbonated.

In 1956, Berra caught the only perfect game in World Series history and after the last out leaped into pitcher Don Larsen’s arms. The moment was captured in time and is one of the most recognizable and broadcasted baseball events in history.

After he retired, Berra went on to manage the Mets and the Yankees and spent time as Houston Astros bench coach. The majority of his career, however, was spent as a tight-knit part of the Yankees machine, serving in many capacities over the decades.

In 1985, he was fired after 16 games by George Steinbrenner and vowed never to return to Yankee Stadium as long as Steinbrenner owned the club.

The franchise was cursed for a decade, until the arrival of Derek Jeter, Bernie Williams, Andy Pettitte, Jorge Posada and Mariano Rivera and then the reconciliation between Berra and the Yanks in 1999 sparked years of prosperity. In addition to rejoining his Yankees fam, Berra was also named to the MLB All-Century Team in a voting by fans that year.

From that moment until recently, Berra remained a fixture at Yankee Stadium and in the clubhouse, where contemporary stars such as Jeter and four-time World Series-winning manager Joe Torre anointed him with Boss Status.

The Yankees retired his uniform #8 in 1972 and honored him with a plaque in Monument Park in 1988.

“When you were around Yogi, he had a way of bringing out the best in you, said Posada.”

Said Jeter on his Player’s Tribune website: “To those who didnt know Yogi personally, he was one of the greatest baseball players and Yankees of all time…and an even better person.” .

Most athletes don’t stick around a sport long enough to make such a lasting impact on a billion dollar business that is always changing, replacing, forgetting and getting younger.

Yogi Berra is that exception. He is an incomparable symbol of baseballs endearing spirit. The diamond was his life and the MLB community is better off for it.