DETROIT – For once, the homies won.

The city beat the suburbs. The Detroit Pistons are moving back to the crib. For many in Motown, it was a dream come true.

That’s right. The Pistons will be playing DEE-TROIT BASKET-BALL in, well, Detroit.

The Pistons’ announcement on Tuesday sent joy throughout Motown. The city game had, indeed, come home. The Pistons will move downtown next season, sharing the Red Wings’ new arena.

For sure, many must have believed that this could never happen – the Pistons would move from their long-time home in Auburn Hills, exactly 31 miles from downtown. In the process, the Pistons – who have played in the suburbs since 1978 – leave behind a beautiful arena that saw the franchise win three NBA championships along the way.

It now means all four pro sports team will play inside the city limits. The Little Caesars Arena – the centerpiece of a $1.2 billion sports and entertainment development – will be a stone’s throw away from Comerica Park, home of the Tigers, and Ford Field, home of the Lions.

With the move, Detroit will be the only North American city to have each the four major professional sports leagues within blocks in its urban core.

“This is a historic day for our franchise and for the city of Detroit,” Pistons owner Tom Gores said on Tuesday at a press conference about the move. “We’re moving to a beautiful new arena that will provide a state-of-art fan experience and we’re investing in the future of Detroit.”

Gores added, “I’ve always believed that a sports franchise is a community asset with the power to unite and inspire people. There’s a big responsibility that goes with that, but there’s a big payoff, not just for the city of Detroit, but for the whole region.”

This isn’t simply a money-grab by another greedy pro sports owner. No way, no how. In Gores’ case, financially, this move doesn’t make sense.

The Palace is paid for, the Pistons own the parking the concessions. Plus, Gores has pumped millions of dollars to upgrade the Palace. If you haven’t been there lately, the Palace is a show place

He’s now giving all that up to pay rent to the Ilitch family, which owns the new arena.

For Detroit, it’s a great sign about the rebirth happening in the city after decades of neglect and despair. 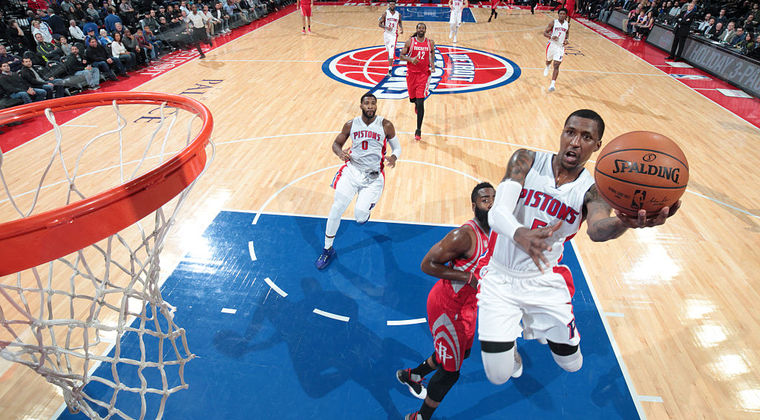 It was also an uplifting signal to residents that, indeed, the city will totally comeback, led by the sports teams. Remember, the Lions moved from the suburbs to downtown in 2002.

For Gores, it does kind of make sense. He wants to make his own mark, carve out his own niche. Doing that in the building that late owner Bill Davidson did it in would definitely be hard.

Here, Gores gets to write his own story. He was the man to bring the city’s game back to the city. All he has to do after that is get his team to win another title.

This isn’t the first sports miracle when the city beat the suburbs. It happened in Cleveland as well.

The Cavs are believed to be the first team that moved out of their city, only to return years later.

The Cavs played in Richfield, Ohio, 20 miles south of Cleveland for 20 years. They returned in 1994. The idea when they moved the team was to draw from both Cleveland and Akron, 10 miles away.

It didn’t work. Basketball is a city game more than the other three major sports. The Pistons were no doubt hurt by their dwindling attendance. For sure, winning is the cure-all. Fans made their way there in the good old days. Still, the fans that love basketball the best will be closer to it now.

For sure, many in the suburbs will be bummed. They are used to heading to the Palace, watching the Pistons play in their own arena. Now, they will share it with the Wings, be tenants.

No doubt, it will be something to get used to. But this will work. You have a committed owner who wants both the city and his team to win again.

In the NBA, the Pistons were the only team not to play in the city limits. That will change next season and it will be a good thing for Detroit, the team and its fans.