I cried when Curtis Jackson died.

No, not 50 Cent-Curtis Jackson, but #34 on the illest squad around back in the day.

Literally, I ran back to my bedroom, dove onto the bottom bunk and sobbed through tears. This was in early March of 1980, when I was nine years old. Jackson played for my second favorite basketball team at the time, before Pearl Washington came to Syracuse a few years later, when the Orangemen supplanted the fictional squad from Los Angeles’ Carver High School on my list.

You see, my New York Knicks had descended into an abyss of hoops horrific-ness at the time. The glory days of Walt Frazier, Willis Reed, Bill Bradley, Coach Red Holztman and Earl “the Pearl” Monroe were long gone, replaced by some yawning 30-win seasons at my beloved Madison Square Garden. There were a few rays of hope in young players like Sugar Ray Richardson, Bill Cartwright and Ray Williams, but things had gotten downright repulsive.

On top of that, my sports idol, the loquacious Muhammad Ali, had lost his heavyweight belt to the snaggle-toothed Leon Spinks, before Larry Holmes began to assert his dominance in the pugilistic science’s premier weight class.

Bucky Dent had copped World Series MVP honors when the Yankees beat the Dodgers, but that wasn’t enough to satiate the thirst of a sports junkie who lived, ate and breathed basketball.

So that’s how Carver High School and the White Shadow came into my world. Did I ever look forward to Monday nights back then, when the CBS drama The White Shadow aired. For those who are unfamiliar, it was about an injured, washed up former pro ball player, coach Ken Reeves, who decides to become the basketball coach at a rough inner city school in South Central, Los Angeles. I’ve spent the last few days meditating on the show, and what it meant to my youth, ever since learning that Ken Howard, the actor who portrayed coach Reeves, passed away a few days ago.

Along with The Wire, Boardwalk Empire, Law and Order, Curb Your Enthusiasm, Good Times, The Jefferson’s, Cosby, Carol Burnett, Cheers, I Love Lucy, Mad Men, The Soprano’s and a few others, The White Shadow is one of my all time favorites.

At the time of its run from late 1978 through early 1981, quality roles for African-Americans were relegated to sitcoms. But on the dramatic side, the best we could seemingly get was the ethically challenged Huggy Bear, who was bi-lingual in English and Jive, on Starsky and Hutch.

Beyond that, when you saw a black face on a TV drama, he was doing and selling drugs, pimping women, gang-banging, doing stickups, and all of that other wholesome imagery that white Hollywood had carved out for African-American actors.

The prime time, dramatic television landscape back then was like the hit ’90s show Friends, with nary a black friend to be found.

But The White Shadow was different. It was actually a black show, a groundbreaking presentation that had white actors in supporting roles. Hooked after the second episode, when the team staged an intervention to confront their teammate Jackson about his alcoholism, I hoped that I could one day play ball for a coach who cared as much as coach Reeves, and that I could be on a squad that had as much fun, with as much of a sense of brotherhood that Carver had. 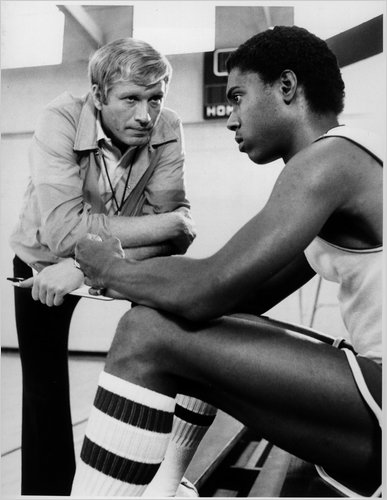 But the strength of The White Shadow’s narrative arc was that it wasn’t all fun and games. The viewers were drawn in, in a way that we became part of the team, rooting for Coolidge to make it, hoping that Hayward doesn’t pull the trigger of his gun when he confronts the dope dealer responsible for his cousin’s overdose, and getting angry at Reeves for being a simp when he quits the team to sniff behind a sexy television personality who’s trying to get him a broadcasting job.

The writers and producers were way ahead of their time, tackling issues that still rear their ugly heads on the sports landscape today, like when we found out that Jackson had a severe problem with alcohol, when Gomez goes back to the comfort of his neighborhood gang when he’s cut from the squad because of bad grades, when Jackson starts betting on games with a local bookie and when Dwayne from What’s Happening guest stars as a talented new player that dies of a heart defect.

Remember when Coolidge moved in with Reeves after becoming homeless due to his apartment building burning down? Or when Thorpe slept with Coolidge’s girl and gave her a sexually transmitted disease? How about when Jackson reconciled with an old girlfriend only to learn that she’d become a prostitute? Do you recall when Gomez got beat up by his violent father, or when Salami was doing the horizontal Humpty Dance with his teacher?

But the absolute emotional crescendo of the series was the murder of Jackson, for whom bad luck seemed to be a constant companion. Toward the end of the second season, Carver’s outstanding season landed them a birth in the city championship game.

But tragedy struck when Jackson was shot and killed as an innocent bystander to a robbery.

It touched such a raw nerve for inner city kids like me growing up at that time, because we were experiencing the senseless death around us of kids and teenagers who got caught up either in or on the periphery of the drugs and violence that were swallowing our communities.

On Thursday, March 31st, Fox Sports 1 will air a 15-episode marathon of The White Shadow’s first season, beginning at 6:00 am. I’ll check out a little bit before digging into my work, and will unwind with it in the evening.

The show was way ahead of its time, giving people of color the respect they deserved with a complexity of feeling, emotion and character development that is still missing from the greater television and major motion picture landscape today.

They touched on issues that still mortify us today, like child abuse and racial profiling, or ones that still cause great angst for the closed-minded, like sexual orientation.

Salami, Thorpe, Jackson, Coolidge, Haywood, Principals Willis and Buchanon, Gomez, Goldstein, Reese and Reeves, they all made me laugh, made me think and made me cry. They made me want to play ball, and they ultimately made me understand the true beauty of what a team really was.

For that, I’ll be forever grateful.