Im probably one of the few guys not holding back on his enthusiasm for BET’s New Edition movie. I was hooked ever since my Aunt Corlyss took me to the Beacon Theatre in the ’80s to see a show featuring Tone Loc, New Edition, Run DMC and Shannon.

Part I, which aired on Tuesday night, did a solid job of filling in the background information about how the group began in its humble, early days in Boston, and the struggles they went through early on with inexperienced management and then-producer Maurice Starr.

It painted a vivid picture of the harsh realities of show business, how artist-unfriendly it can be and the old school suicide record contracts that were given to young, talented artists with no true understanding of the music industry.

Part I thoroughly and appropriately humanized the four brothers from the Orchard Park Projects in Boston and the later addition of Ronnie Devoe, setting up an incredible journey covering the highs and lows of the only R&B group to rival the Jackson 5 in impact, talent, variety and black cult-icon status as a boy band.

The various successful musically-laced roads traveled by the group following their tremendous run as a unit — the departure of Bobby Brown and his rise to R&B King, the impactful and groundbreaking solo albums of Ralph Tresvant and BBD — created riffs, physical confrontations and obstacles to getting paid along the way.

I happen to know most of the background info on New Editions come up, but there were some interesting scenes that put things in perspective.

It is obvious that Mike Bivins always had his mind on his money and unlike his other band members, didnt really do it for the love. His first love was hoops, but in music he saw a future that could catapult his family out of the projects. He showed an affinity for business even as pre-teen.

Bobby Brown simply wanted to be a star. He craved the spotlight and was in it to win it from the beginning. His situation is similar to Ice Cubes with NWA, whereas they both knew that they were stars and were tired of playing second fiddle and making small change. His desire to be the man and his rambunctious nature led to him being voted out of the group in 1986. He dropped King of Stage, bagged Whitney Houston and the rest is history.

Ralph was just a wonderful talent. He had the high-pitched Michael Jackson voice with a distinct richness that stamped the groups signature sound and elevated him to lead. According to the movie, Ralph is the most integral figure to the early success of the group and without his loyalty, there may have never been a New Edition album.

Maurice Starr reportedly wanted Ralph to drop the crew and make a solo album. His loyalty to his crew who inspired him as an artist, as well as his concern for being ostracized in the hood, influenced a young boy to make mans decision and stay true to the original formula.

If Tresvant displayed the same selfishness that so many of the group members eventually displayed over the years, my fingers would never be flying at 100 mph as I write this personally-thrilling piece on my favorite boy group of all-time.

Ronnies addition to the group came later in the game, when Starr felt that one more piece was needed to make them a true, modern-day Jackson 5. Ronnie was the finishing touches on a group bound for stardom. He wasnt from the OP projects, though he did live in the same rugged Roxbury neighborhood. He was a bit more clean cut and taller than the other boys and he was that eye candy that the group needed.

These boys were dirt poor and none of their dads were present in their lives. They had it hard, and the film captured that. They were the stereotypical young, black men from the hood.

They were the everyday urban youngster trying to survive in underserved communities and conditions. The odds that they would even make it out of the projects was one in a million. The fact that they became worldwide icons is why their American success story is worthy of a three-part miniseries with all of the fanfare of a Beatles reunion tour.

I cant wait to see Parts 2 and 3. The next two parts begin to focus on their personal motivations as adults and the well-documented personality and conviction differences that almost crushed their friendship forever.

Wood Harris, who is a personal favorite of mine, did a tremendous job of playing the role of the bands longtime manager and original choreographer, Brook Payne. Michael Rapaport, Tank, Faizon Love and Bre-Z all give powerful performances, capturing the essence of the moment and the times.

The ’80s and ’90s-style wardrobes were off the chain and dead on too. 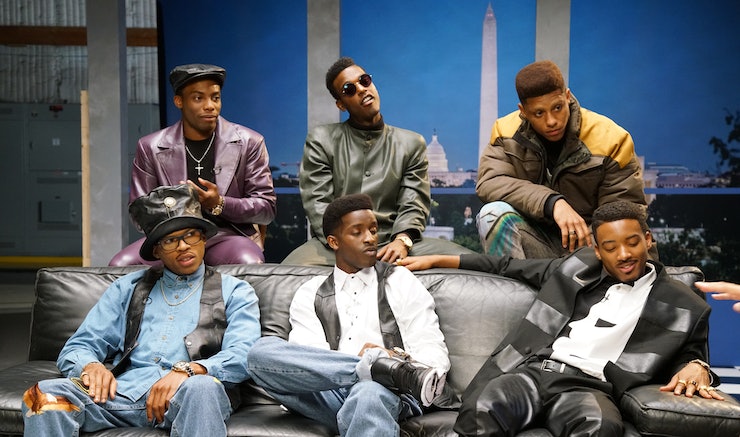 The New Edition Story is directed by Chris Robinson (ATL) and is co-produced by Payne.  All six of the groups members — Bell, Bivins, DeVoe, Johnny My, My, My, Gill, Brown and Tresvant helped produce the film as well, so it seems we are getting an authentic, accurate portrayal of the group, which for me, has made it a must- see.