Orange is the New Black fans have been given the opportunity to take part in the latest promotional campaign for season two of the hit Netflix series which asks fans for original artwork submissions based on the series. Deemed "The Global Fan Art Competition" over 500 submissions were accepted between June 9th and June 30th. And five works of art were selected to be displayed in New York City on 36th Street between Fifth and Sixth Avenues through August 24. A tour of the works will have the art displayed in London in front of 112-142 Mare Street in Hackney for two weeks, between August 11 and 15.

One of the images selected for display, depicts the cast of the show in pixelated form. Another simply features an illustration of the character Alex’s black-rimmed glasses with tape across the bridge against an orange background. 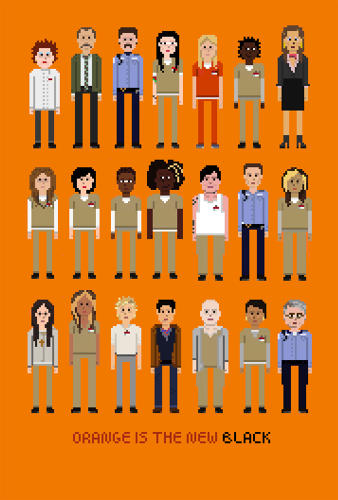 Orange is the New Black is based upon Piper Kerman’s 2010 memoir of the same name, detailing her experiences in the Federal Correctional Institution Danbury Women’s prison after being convicted on money laundering and drug trafficking. In July 2014, the series was nominated for 12 Primetime Emmys.

Past marketing campaigns for the series have included Orange Is the New Black-branded food trucks labeled “Crazy Pyes” named after the character Crazy Eyes, offering  menu items inspired by some of Crazy Eyes' most memorable lines from season one such as, "I threw my pie for you" and "chocolate and vanilla swirl." The trucks made stops in New York City, Mexico City and Los Angeles. Another promotional idea came with a smartphone app titled “Orange Is the New App” which allows users to picture themselves with the characters.

Season 2 of Orange is the New Black premiered on June 6th 2014. The series was also picked up for a third season which will premiere in 2015.