Brandon Armstrong, aka The NBA Impersonator, has become the epitome of a viral sensation. The one-time NBA prospect-turned-entertainer has been almost an overnight sensation with inventive and comedic renditions of such NBA superstars as James Harden, LeBron James and a multitude of others.

Armstrong spoke with The Shadow League about his new show, his sudden rise to fame and his plans to parlay his growing notoriety into bigger things in the entertainment business and beyond.

The Shadow League: When did you realize that your social media popularity could actually pay off to some extent?

Brandon Armstrong: Probably after the James Harden video when I was asked to come on Sports Nation. Thats when I realized I could make this something more positive than it actually was.  Maybe I could turn it into a lifestyle.  After that video is when I thought Okay, I can really take this somewhere.

TSL: You played basketball at Lincoln Memorial University and played with the Reno Bighorns of the NBA D- League before stints overseas. What type of player were you?

B.A.: On the court I always had fun. Cracking a joke here and there, making a ref laugh, other than that I was always the guy that had people loose.

TSL: How do you come up with some of these sketches? 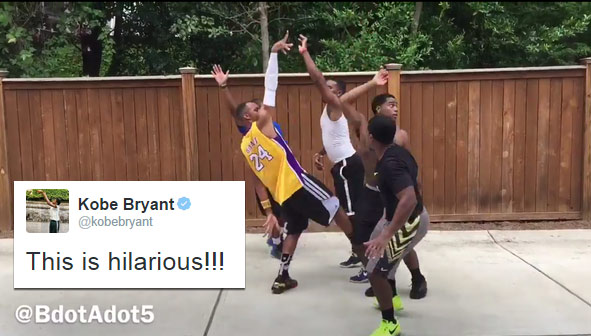 B.A.:  I have a new show coming with AT&T Hello Lab where they gave me the opportunity to create our own show, basically as a way to connect with our fans, our supporters and our followers.  My show is called On The Line, and its the first ever broadcast sports show on Instagram.  We just launched it with the Final Four out in Houston and were about to take it to the next level with the NBA playoffs right now.

Its pretty cool and I really appreciate AT&T Hello Lab for giving me this opportunity.  So far, so good. My followers and supporters love it and Im really looking forward to doing more work.

Wherever it takes me. I dont want to be labeled as a comedian or just a basketball player, I want to be able to do it all.  I can do everything; I can cook, I can play basketball, I can make people laugh, just trying to be one of the best entertainers in the business.

In addition to performing videos and making appearances on the red carpet, Brandon Armstrong can be found on Instagram at @bdotadot5.  You can also follow him at @OntheLine on Instagram as well, where Shaq and Scottie Pippen are among his first guests.