Mike Francesa, the sports media personality and radio talk-show host of  Mike’s On: Francesa on the FAN, is the part of the reason I will always have work. After a recent clip of him declaring a woman could not be the head coach of any major mens sports team, I immediately emailed my editor, Ali Danois, and said, Please let me write a response to thispleasethis guy is just, wow

To which he responded, Go ahead and knock it out, Anya.

Francesa was responding to a father who called in and asked if his daughter, who is an avid sports fan, could one day coach a mens team.

Without missing a breath, batting an eye, or using a brain a cell, Francesa said, First of all, do you know how difficult it would be for a female to manage 25 men? Or 50 men? Do you know how impossible that would be? It wouldnt be tough. It would be impossible. Youre gonna tell me that you would think a woman could walk into an NFL team and coach as a head coach, 15 assistants and 50 to 60 men?

Mike Francesa with an unfathomable display of sexism. Women shouldn’t be anywhere near men’s sports!

(Except for cheerleaders, presumably.) pic.twitter.com/2n2plZMLIF

It did not end there. After Francesa was called out for being a chauvinist he defended himself, Theres no saying that everybody has to do every single job. Some are better for some people. Thats all. Thats not being chauvinist. Thats not being Stone Aged. Thats just being reasonable. It is difficult for men to run these rooms.

To be honest, I hate to have to respond to statements made by men who have no idea how strong and badass women are. Of course I dream of a world where women are not constantly put in the position of having to prove themselves worthy, or having to invest energy in fighting stereotypes.

Because it so EXHAUSTING. I wonder what makes Francesa believe that men, who coach womens teams, have another switch in them that they are able to turn on to be able to handle a bevy of women?

Are men magical and mystical creatures that can do anything they set their mind to? Is being born with a ball sack a symbol of strength, despite the fact if kicked in said sack, most men crumble to their knees, begging the sweet baby Jesus for mercy and forgiveness?

What if a male head coach transitioned into a woman? Would that also make her unqualified to coach men, despite her experience of living as a man beforehand? Or what if a woman transitioned to a man?

Tell me Francesa, what are the specific outliers that make a man qualified for any and every job, that women apparently are not well-suited to handle?

Francesa, you may not know it, but women are super smart. We have created and managed empires (Oprah, Arianna Huffington, and Sheryl Sandberg.)

We have women who are now Generals in the military, managing squadrons mostly made up of men. Thirty-seven female Generals to be exact.

And if we want to look at history as any indicator for how well men run things, it might be safe to say that perhaps we should let some women take charge, as most wars have been started by men.

Lets be honest, the NBA, the NFL, MLB, NHL, and the MLS would be better served to have a woman in charge of teams. And no, not as an executive as Francesa stated, but as a head coach. Each league has been plagued with stories of sexual assault and domestic violence, and each league has had colossal failures in dealing with these matters. Perhaps having a woman leading her team would also lead to men respecting women more, rather than being guided by more testosterone. 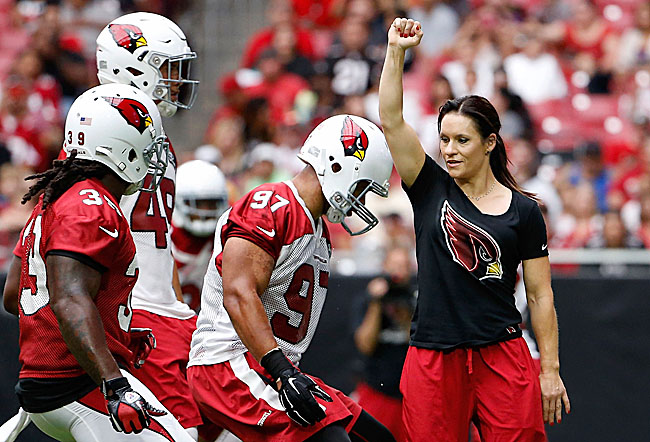 Secondly, for any athlete who cares about winning, it wouldnt matter if his or her coach was a gremlin. Athletes play for the coveted ring and trophy, and if a woman could help them achieve that, then why the hell not? And if the male athlete could not handle a woman telling him what to do, then hed only be experiencing what women have endured for centuries: men telling us what to do with our reproductive rights, to smile when walking down the street, how to dress, how to talk…basically how to be alive.

Unfortunately for Francesa, there are already women making headway into the world of coaching men:

Jen Welter, the first woman to coach in the NFL with Arizona Cardinals

Becky Hammon, the first woman to coach full-time in any major league, working as an assistant coach with San Antonio Spurs.

Nancy Lieberman, an assistant coach to the Sacramento Kings

Justine Siegal, the first woman in history to throw batting practice to an MLB team at the Cleveland Indians camp in 2011. In 2015, she became the MLBs first female coach when she took on a role as guest instructor for the Oakland As instructional league club.

These women are paving the way for future generations of women who will undoubtedly find themselves with the incredible opportunity to be seen as a leader of major teams.

However, the only thing that would keep women from reaching the top of the coaching ladder with a major mens team, will not be her qualifications: it will be opportunity, and not having a fair chance to come up through the system, and having to fight against the very thinking that Francesa so firmly believes in.