Somehow the treacherous Midwest has taken an unexpected turn into an SEC Challenge. Eight days ago, the Midwest was more complicated than an Aaron Craft-proof Rubiks Cube. At this juncture, the field has been drastically simplified. Friday’s semifinal is a fork in the road. There are only four possible matchup combinations for the Midwest Regional Final. I'll take a gander at the Sweet 16 and then offer a glimpse of possible futures.

It's funny how Kentucky and Louisville always find themselves opposite one another in the tournament when Tobacco Road rivals UNC and Duke have never met in the tournament. This is the second Bluegrass tourney duel in three years and the sixth one overall.

I wasn't so sure Kentucky would reach the Sweet 16 because a few years ago, most of their rotations was celebrating theirs. Kentucky and Louisville is a rivalry that stretches back decades, but has been strengthened by the Calipari vs. Pitino. If it weren’t for football, they could be the Duke and UNC of SEC basketball rivals. They’ve downplayed the coaching matchup, but I won’t.

Pitino and Calipari are essentially Nic Cage and John Travolta in Face Off. They've been tracking each other for years and once again, they'll meet in the NCAA Tournament. Eighteen years ago, Pitino was Calipari recruiting McDonalds All-Americans. The only difference was that his blue chippers remained in Kentucky Blue for three to four years. The ‘90s were a different time.

Nowadays, Pitino is making due with hand me down seniors while Kentucky is shopping on Saks Fifth Avenue for one-and-done freshmen. What spurred the change is a bit of an unanswered mystery. It’s not like Louisville doesn’t have a high enough profile to consistently haul in future NBA All-Star talent.

If I had to take a swing at Pitino’s motivations, I’d point to the trademark of his teams; their matchup press zone defense. It’s a defense that must be honed over time and defense is usually one of the toughest things for young players to grasp.

Pitino is the Ra’s Al Ghul of Louisville’s full-court matchup press bringing about the decline of civilized offenses. The initiation process is lengthy. A lineup of freshman and sophomores simply couldn’t execute Pitino’s complex defensive as effectively as a group of upperclassmen who’ve been voluntarily brainwashed into becoming defensive assassins.

Pitino has pursued a few select McDonalds All-Americans, however, they usually have some sort of deficiency in their game which requires years of refining on the collegiate level.

This matchup’s storyline comes down to the efficacy of fast food versus reservations in advance for five-star cuisine. On the court, the guard play will be pivotal. Andrew and Aaron Harrison are playing their best basketball of the season and James Young is shooting lights out.

Montrezl Harrell will be neutralized against Kentucky’s trio of inside beasts. Randle will dial in a double double every night, but the question is which wing scorer is going to provide big shots down the stretch. The Harrison brothers are shaky from night to night and Louisville’s press could put their ballhandlers in a bind.

Two paragraphs in and I haven’t even mentioned that this clash pits two of the last three national champions against one another. The grass has been greener on the other end of the bluegrass though. Kentucky has beaten Louisville four out of the last five times they’ve met.

This is when we’ll determine just how well Michigan shoots from downtown under duress because it’s hard to imagine them getting much production down in the paint against Tennessee’s Trenchmen Jarnell Stokes and Jeronne Maymon.

Tennessee defends the perimeter extremely well, but there’s a common factor in Michigan’s losses this season. The Wolverines are eighth in three-point shooting percentage and 21st nationally in field goal percentage. However, in every loss this season excluding Arizona and Duke, they’ve shot worse than 42 percent from the field. That might sound par for the course in college hoops, but for Michigan that’s a death sentence against the upper echelon of teams.

Tennessee on the other hand will face the best collection of scorers they’ve seen all season. That includes Kentucky. Michigan’s reservoir of wingmen including Glenn Robinson III, Nik Stauskas and Zac Irvin should overwhelm Tennessee’s efficiency-based offense.

Tenneseee’s head coach Cuonzo Martin won a Big Ten title as the complementary scorer alongside Robinson’s father at Purdue. Another incentive for Tennessee’s seniors to beat Michigan harkens back to the 2011 NCAA Tournament when the rising Wolverines throttled Tennessee by 30 in the final game of the Bruce Pearl era. That game should leave a sickening taste in the mouths of point guard Antonio Barton, Jordan McRae and Jeronne Maymon.

THE GARDEN OF FORKING PATHS

We’ll call this one the Rumble In The Frontcourt. Don’t follow the ball when these two SEC programs meet. Watch how Stokes Maymon, Julius Randle and Dakari Johnson are sumo wrestling in the post and checking each other into the boards whenever a shot goes up. The latter was a hockey reference, but it’s the only appropriate reference to make that compares to Tennessee and Kentucky’s physicality down low.

This matchup would be Julius Randle’s nirvana. Without Mitch McGary, Michigan’s paint will be a field of dreams where he’ll dominate the boards like he’s playing ping pong with a wall. Getting tickets will be extremely difficult. Especially because half the seats in the arena will be filled by NBA talent evaluators. If your NCAA Tournament bracket is busted, you could create a whole new bracket on which of the stars in this potential matchup will be NBA stars. However, Kentucky has one thing Michigan doesn’t. They’ve got post scoring available instead of watching from the sidelines.

A rematch of the 2013 national championship game in the West Regional Finals could make for an intriguing subplot. Louisville’s offense can still sputter from time to time while Michigan’s defense would be one of the worst for a national champ of all-time. The profile of Final Four teams usually includes a top-30 adjusted defensive efficiency ranking. Last season’s Wolverine squad broke the mold with the 48th ranked defense in the nation. This season’s unit sans McGary is 95th!

Louisville’s offense isn’t explosive, but they can exploit flaws, which Michigan has many of.

This could be another low scoring Clankfest if Tennessee survives the Michigan firing squad. Aesthetically, this could be akin to watching a Youtube video of deaths from the SAW series. Just look away from the bricks and watch the defensive rotations.

When you get a chance, take a glance at the women’s tournament. I peeked at it, just to place the odds on the Vols men playing deeper into spring than the women for the first time in my recollection and noticed something intriguing on the horizon. As if this possible showdown couldn’t be more contentious, Louisville and Tennessee could also meet for a trip to the Final Four in the Women's Tournament on Monday in Louisville if they both win out in their respective Sweet 16 matchups. Keep your eyes peeled for the Vols-Cardinals doubleheader. 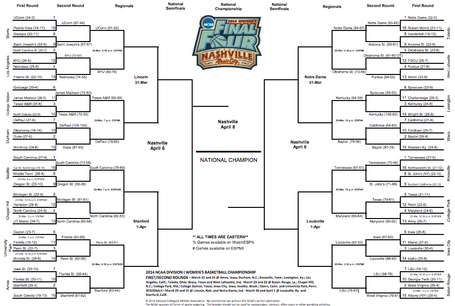