Founded as Timely Comics, 75 years ago in 1939, Marvel Comics survived during the Golden Age of comic books as a third fiddle to DC Comics and the now defunct Wiz Comics. With popular characters like Captain America, it wasn’t until the Silver Age of the 1960s did Marvel begin stepping out as a leader in the genre.  From the Black Panther and Storm, through Blade and Luke Cage, Marvel has been at the forefront of diversity in comic books and other communications mediums. But these days, it’s no longer just about comic books. The characters that many have grown to know and love have become akin to an American mythological canon.

The lore birthed from the minds of Stan Lee, Jack Kirby, Chris Claremont, Todd McFarlane and a host of others to become as integral to the American way of thinking as hamburgers and beer at a Fourth of July cookout. The first taste of Marvel that stepped out of the pages of the comic book was the Marvel Super Heroes Animated series back in 1966.  The show featured seven minute segmented shorts with Captain America, The Incredible Hulk, Iron Man, The Mighty Thor and The Sub-Mariner engaged in their normal, word saving duties.  Although the series was short-lived, lasting only three months, it planted the seeds for a Marvel world that would eventually become a global favorite. Adults alive at the time undoubtedly recall Spiderman’s live action debut on the now-defunct PBS show The Electric Company in 1974. People who had clearly outgrown this children’s show would still continue to turn the dial to PBS just to catch a glimpse of the latest Spidey Super Stories. Later, Marvel's media empire stretched its tendrils into records as Golden Comics produced four Marvel Age Comic Spectaculars on 33 1/3 RPM LPs back in 1966.

Marvel film franchises have been hitting the silver screen since as far back as 1944, when Republic Pictures put out Captain America to take advantage of the national groundswell in support of America’s efforts in World War II.  Afterwards, the masses would not be blessed with another big screen adaption from a Marvel Comics character until the largely forgettable Howard the Duck came along in 1986. Most only watched it because Star Wars creator George Lucas was involved as a producer. But it would be another 12 years before the Wesley Snipes vehicle Blade (New Line Cinema) would revitalize interest in movies based on Marvel Comics properties in 1998.  X-Men, starring Hugh Jackman, Halle Berry and Patrick Stewart, would be released by 20th Century Fox two years later. What followed was a veritable barrage of films based upon Marvel Comics characters. And creator Stan Lee would make a cameo in almost every last one.

There have been a fair share of blockbusters, such as Spider-Man (2002), X-Men: The Last Stand (2006) and Marvel’s The Avengers (2012). Marvel Entertainment based films have grossed $6 billion with nine films over the past five years. But there have been a few colossal flops as well.  Fans wish they could get their money back for such cinematic slaps in the face as Ghost Rider starring Nicholas Cage, Daredevil starring Ben Affleck and the entire Fantastic Four film series.  No project is without its own blemishes.  But many fans were upset at the disconnected nature of the films due to the fact that they were released by film studios with different standards.  For example, the X-Men and Fantastic Four film franchises was released by 20th Century Fox. While the Iron Man movies, Thor films and The Incredible Hulk were all released by Marvel Studios. The fact that different film studios own the rights to varying works means that the X-Men and the Fantastic Four will never show up in an Avengers movie or one featuring Iron Man, Thor or The Hulk. Even though the Fantastic Four and the Avengers have been allies from the very beginning. While the X-Men have oscillated between being an ally and a rival to the Avengers throughout their existence. 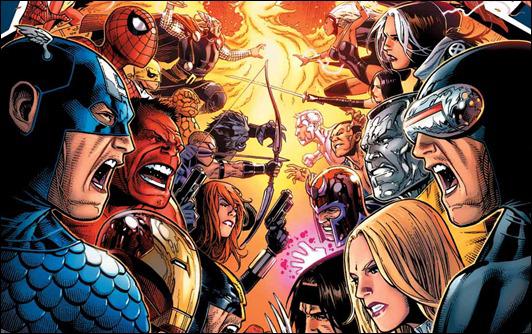 This has largely been remedied by the manner in which the Marvel characters produced by Marvel Studios, a subsidiary of Disney, is concerned. The tie-ins of Iron Man, The Hulk, Thor and Captain America leading up to the release of Marvel’s The Avengers in 2012 was so masterful that DC Comics is attempting to follow the same blueprint with the release of Batman vs. Superman in 2016. This will lead to a Wonder Woman movie in 2017 and an eventual Justice League film down the road.

Keeping with that trend of movie tie-ins, Marvel’s Guardians of the Galaxy is slated to drop on August 1, and several of its villains and tenets were foreshadowed in Marvel’s The Avengers. After seeing Guardians of the Galaxy, many fans will see that the Marvel Universe has expanded exponentially for the better.  Starring Chris Pratt, Zoe Saldana, Dave Bautista, Vin Diesel and Bradley Cooper, Guardians of the Galaxy might be the most heart-felt and family friendly of all the recent Marvel offerings.  It tells the story of mercenary and thief Peter Quill. Calling himself Star Lord, Quill rolls with a band of unlikely allies as they are forced to come together to save a distant civilization and the universe. Although Saldana plays the lethal yet righteous assassin Gamora, she didn’t actually have to become her character.  It was as if she already was Gamora, embodying her guile, combat prowess, agility and stealthiness with ease.  WWE wrestler Dave Bautista played the vengeful warrior Drax the Destroyer, a noble fighter whose family was killed by Ronan the Accuser.  Adding comedy, he hilariously takes everything spoken to him literally, which leaves room for tons of laughter.  Meanwhile, the miniscule terror known as Rocket Raccoon (Bradley Cooper) is a genetically engineered killing machine with a surly disposition and an affinity for guns that are twice his size. While Groot (Diesel) is an athromorphological tree-like life form with a three word vocabulary who acts as Rocket’s bodyguard and best friend.

The film’s score adds character also as protagonist Quill is often found listening to a mixtape created for him by his mother that features some of the best music from the 70s and 80s, like David Bowie, The Jackson 5, Marvin Gaye, and Blue Swede. And the dialogue between the primary characters, as well as between the Guardians and the Nova Corp, is absolutely hilarious. While Quill is a top level thief, he also has the sensibilities of an eight-year-old child when it comes to interacting with people and telling the truth.  Rocket Raccoon is the brains of the operation, but he often lashes out due to a clear Napoleon complex.  Groot is used perfectly in each scene as his gestures, facial expressions and limited vocabulary punctuate the actions and words of the other cast members throughout the film.  The addition of Djimon Hounsou,  Glenn Close and Benicio del Toro to the entertaining appearances and Guardians of the Galaxy will certainly recoup its $100 million production cost. The appearance of Thanos, voiced by Josh Brolin, is an omen that something huge is in store for the entire Disney-produced Marvel Universe as the despot has been alluded to in three Marvel films up to this point. Thanos has been the secret antagonist behind the horrific events occurring in each mishap that has befallen the Avengers and nearly all of its individual members. Although initially, some fans believed that creating a film based on a second-tier comic book team would be suicide, Marvel stuck the proverbial landing on Guardians of the Galaxy in creating a movie that The Shadow League can easily give an A.

But this is part of why The Marvel Universe has lasted 75 years. As it continues to unfurl right before our eyes on the silver screen, our childhood dreams of what a cinematic Marvel Universe done right would truly look like are coming to fruition. And it won’t end anytime soon. Check the following tenuous listing of release dates for future offerings in the works from Marvel Studios and 20th Century Fox.

Guardians of the Galaxy 2 (Marvel Studios)

With this plethora of films in development, the Marvel brand name continues on television as the hit series Marvel’s Agents of S.H.I.E.L.D. continues to support the happenings in the Disney film franchises while carrying on its own intriguing story arc filled with obscure references and characters that only the most dedicated comic book fan will recollect.  Netflix is currently preparing its series franchises for Daredevil, Iron Fist, Luke Cage and the Defenders.  The Daredevil series will be 13-episodes long with the entire Netflix venture aiming for a 60-episode threshold.

Those who grew up in the Golden Age of comic books, passed it down to their children and grandchildren.  And like any smart corporation, Marvel Comics continues to capitalize off of this love with a legion of products we continually gobble up, whether the quality is to our liking or not. Creating a culture that mirrors our world and expands upon it in ways that only the most intrepid among us could hope to fathom, Marvel has been one of the intrepid few over the last three-quarters of a century to survive, expand, and get better.