Jenkins is an NFL safety, a teacher, influencer and activist.

Its easy to displace Malcolm Jenkins in time. The All-Pro Philadelphia Eagles safety carries a sagacity that far belies his 29 years.

Hes a bearded anachronism, easy to picture in a grainy black-and-white shot walking arm-in-arm with Martin Luther King in Selma, Alabama, or in the background standing with Jim Brown, Bill Russell and Kareem Abdul-Jabbar in Cleveland, Ohio, in support of Muhammad Alis refusal to be drafted during the Vietnam War, or defiantly sitting down at a segregated Woolworths lunch counter in Greensboro, North Carolina, waiting to be served.

When Colin Kaepernick knelt last year during the national anthem, protesting the oppression of people of color in the United States, Jenkins was one of the first NFL players to support him, raising his right fist in the air during the anthem. He speaks to local police and to Philadelphia inner-city groups when it comes to improving relations between law enforcement and the African-American community.

Many of today’s pro athletes don’t like putting themselves out there, fearful their brand may be tarnished by speaking out socially or taking a public stand.

Not Jenkins. He puts more than money where his mouth is. His mind and actions are right there, too.

So when Jenkins heard about a youth football team in Beaumont, Texas who took a knee to draw awareness to issues such as police brutality and racial inequality – and were disbanded from their league because of it – Jenkins and a group of other socially conscious NFL players had to act, raising $20,000 for the coaches and kids in that area to begin their own league this coming fall.

The contributions from Jenkins, Anquan Boldin, Devin McCourty, Torrey Smith and one other player who chose to be anonymous, went to buy helmets, shoulder pads, tackle dummies, blocking pads, a hydration station, field striping kit, down markers and footballs for the group.

The players’ offering is part of a larger national movement led by Boldin and Jenkins to garner support for criminal justice reform.

I was so impressed when I met coach (Rah-Rah) Barber and the young men. To stand up for human rights takes strength, knowing that there is risk and reward, said Jenkins, who discovered the plight of the Southeast Texas Oilers during Super Bowl Week at a Town Hall organized by RISE (Ross Initiative in Sports for Equality), which honored the Oilers for their courageousness. It was important to all of us -Q, Devin and Torrey – to not only applaud them for their efforts but to make sure that we sent the message to those kids that it is ok to stand up for what you believe in. Our way of showing that was to make sure that they had the right equipment to start off the season strong.

No one hesitated when I asked for help. All we had to do was collect the funds and the money was there as soon as we asked everyone. We purchased the equipment and its supposed to arrive in July. What happened to this team was a terrible message to young kids. The guys involved wanted to make sure we sent a counter message. If you’re protesting on behalf of things that need to change, its something that needs to be applauded – not punished, especially when you’re talking about kids and their opportunity to play football. We wont get that next generation of people willing to give if it means taking away something they love. 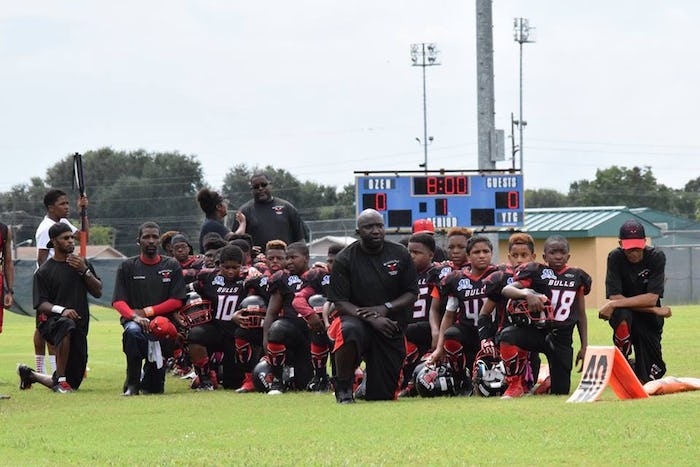 In his three-year span in Philadelphia, a city notorious for its a cold, abrasive fan base, Jenkins has been embraced. The eight-year veteran has been a stalwart on and off the field, improving with age. In 2016, he had a career season for the Eagles in interceptions (3) and touchdown returns (2). He was fourth on the team in tackles (72) and recovered a fumble. He can play either safety positions, and last year played slot corner on occasion.

And he hasn’t been afraid to let people know what is going on outside the stadium.

I’m not sure what I may do this year, I haven’t really thought about it that much, Jenkins said. The issue is not going anywhere. What I wont do is change my attitude towards what is going on in the country. Colins’ message hasn’t drifted away. The medias coverage of Colins message has. But guys in the NFL are getting more active in the work behind what Colin started. What isn’t getting much traction are the amount of guys getting involved with what Kaepernick stood for.

On Friday, July 7, Jenkins formed a group of 21 NFL players that participated in a call-a-thon to congressmen and local politicians, pushing to get legislation passed put forth by Senator Cory Booker (D., N.J.) called the PRIDE Act, which means Police Reporting of Information, Data and Evidence.

My biggest thing is I like teaching. As I learn something, I like spreading things that I learn.

Last year, Jenkins received positive reactions for his protest, for the most part – which actually had a lot to do with Jenkins himself.

I have no problem with what Malcolm Jenkins did, and with people expressing themselves [during the national anthem] the way they want to express themselves, said John Richard, 25, before the EaglesSept. 25th game against the Pittsburgh Steelers, after he just returned from a tour in Kuwait after being deployed by the United States Army. If NFL players want to do it, let them do it. They have to express their views here on this stage, and I understand it. Its different from sitting down during the national anthem.

I know Philly, and this is Malcolm Jenkins, and hes loved by the fans – and Philadelphia is a football nation. Hes fighting for what he wants and hes doing it in a respectable way. Hes standing up during the national anthem. Hes still respecting our country. There are a lot of meatheads in an Eagles crowd. There are people that wont like it, because there are always those kind of people. I served our country and I dont think hes doing anything wrong. Hes a classy guy.

But not everyone feels the same way.

The majority of the responses I received were positive. The one thing that helped was I able to communicate why I was doing it and what I was doing it for, Jenkins said. I did get the negative, like I can go to a different country. People called me the n-word, and some race stuff. It was to be expected. There were no threats to my life or anything. They came in the form of emails and written letters. Most of the negative were argumentative, but the social media responses were kind of rough.

I didn’t get angry over it. Bigotry doesn’t really bother me. You can call me the n-word all you want, it has no control over my life or the things that I do. I didn’t get upset. I don’t get upset over ignorant people. It serves no purpose, and in all actuality, nothing about that word really affects anything in my life. I know who I am. Nothing changes when you use that word. I don’t give it that authority.

The people who did upset me where the ones I sensed didn’t understand what my message was, and were very adamant that it was wrong. You can tell that they spoke without understanding. Those are the people that I responded to, and I asked them why they thought that way. Im not assuming they were wrong, because I can only speak on my experiences, like they can only speak on their experiences. Those are the opportunities for education and dialogue. That’s when you learn and grow.