When Shaka Smart left Virginia Commonwealth University — a  kingdom he had built with his bare hands, ambition, leadership, basketball knowledge and competitive spirit — his departure left a sharp pain that ripped through the hearts of basketball fans in Richmond, Virginia.

What would become of a program that was hand-crafted for excellence and then loses its creator? Smart was the young coaching savant who was able to compile a 163-56 record in a half decade of work.

Smart had reportedly shunned offers from USC, NC State, Maryland, Marquette, Illinois, Wake Forest and UCLA along the way, but even the impenetrable bonds he formed with his Rams players couldnt overcome the lure of the doe and flow offered by the University of Texas.

This season was expected by many to at least be a step backward as VCU adjusted to losing the soul of their basketball movement. Fortunately for new coach Will Wade, the sky hasnt fallen at VCU. In fact, the Rams havent missed a beat without Shaka Smart.

Smart, 38, took VCU to the NCAA Tournament five straight seasons and was 27-9 in his first season. The brother averaged 27.2 wins per year in Richmond and won the 2015 Atlantic 10 tournament as a parting gift to the many fortunate fans who have seen their modest university grow into a basketball power. They have a chance to win back-to-back conference titles this season and will probably be anywhere between a No.8 and No.10 seed in the NCAA tourney.

VCUs emphatic 85-70 victory over UMass in the Atlantic 10 tournament quarterfinals on Friday at The Barclays Center in Brooklyn, was further proof that Wade is building his own legacy and he wouldn’t mind an unexpected c’hip run like Kevin Ollie had when he took over for the great Jim Calhoun at UConn. 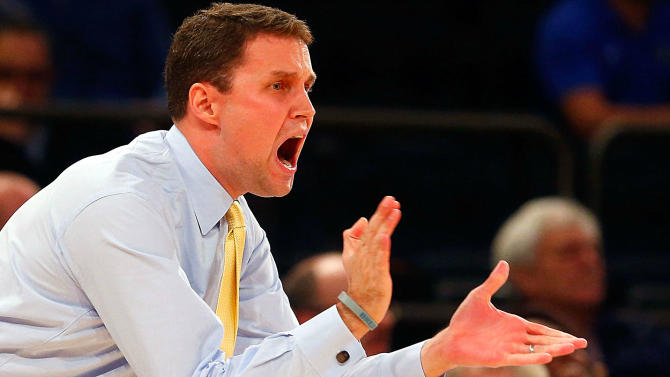 VCU was in command early, taking a 39-30 lead into halftime. Overall, they scored 50 points in the paint and opened the second half with a 13-2 run that ended the Minutemen’s season.

“I think that’s growth in our team and our program,” the Rams first-year coach said at the postgame press conference. “We’ve been pretty reliant on the 3 in the past…We just pounded that thing in the paint and were able to score. So that’s just growth in our team.”

The Rams continued to grow on Sunday as they dismantled 25th-ranked Davidson, 76-54 behind a dizzying pressure defense reminiscent of the Smart glory days. The semifinals win propels VCU to Sunday’s A-10 Championship game at 12:30 pm ET against fourth-seeded Saint Josephs (26-7). VCU is seeking to become the first school to defend an A-10 title since Temple won three straight from 2008-2010.

Wade is quickly emerging from Smarts shadow and while he surely had his doubters, the coaching neophyte was always confident the winning ways would roll on in Smarts absence. He said as much last fall.

I know what Im walking into, Wade said. I knew it the day I took the job. I expect some bumps, but I think weve got the pieces in place to be pretty good this year and beyond.

In retrospect, it couldnt have worked out better for both parties. In fact, Wades early success is eerily similar to Smarts rise. Wade isnt only the same age that Smart was when he assumed the helm at VCU in the 2009-10 season and took the Rams to the Final Four in his second season, but Wade was Smarts understudy as an assistant coach for four years before becoming the head coach at Chattanooga in 2013 and then returning to assume the Rams number one spot this season.

Shaka was indeed a living legend with the keys to a castle he built with his own hands. His staple of defensive havoc, from end-to-end for 40 minutes terrorized teams with fancier names and glittery games. Wade has kept some of the principles Smart implemented, but he’s also scaled back a bit on the full court pressure and emphasized half court defense, which has made VCU one of the best perimeter defending squads in the country.

Smart has already made history by becoming the first Black mens basketball coach in the history of the University of Texas. Historically and socially, its a huge deal. With the unlimited resources Texas offers, Smart can set his sights on realistically becoming the fifth African-American college basketball coach to win an NCAA title. John Thompson (1988), Nolan Richardson (1994) Tubby Smith (1998) and Kevin Ollie (2014)  are the others.

As far as basketball goes, Smart is expected to take his newfound gold and build a shining basketball fortress. His Texas squad got bumped by Baylor (75-61) in the Big 12 quarterfinals and awaits Sundays March Madness seeding with a  20-12 record and more than a few tourney-type wars under the belt. Last years Longhorns squad went 20-14 and lost to Butler in the Round of 64.

Wouldnt it be something if these two teams, both still bearing the fingerprints of the same coach, collide in the NCAA Tournament ? It would be the game of the day and a fitting close to the profound legacy Shaka Smart has left in Richmond and affirmation of the capable hands the program is now in with young stunna Will Wade.