King James might be returning to the Olympic stage in the 2020 Tokyo Games with Gregg Popovich at the helm.

James, who already has two gold medals, said that Popovich taking over as coach of the U.S. team will influence his decision on whether to play in the 2020 Tokyo Games.

“It factors a lot,” James told reporters on Saturday before the Cavs lost to the San Antonio Spurs. “I’ve said that before. He’s just a great mastermind of the game of basketball.” James didnt catch wreck in Rio de Janeiro with some of his other NBA pals this summer. He sat out that Gold Medal-winning run to give his aging body some well-deserved rest after leading Cleveland to its first NBA championship. Also amid his free agency and concerns over the Zika virus.

However, he’s still connected with Team USA and Popovich replacing outgoing coach Mike Krzyzewski could be enough to draw James back to the Olympics and match Carmelo Anthonys record of three hoops golds.

Says NBA.com: James will be 36 in 2020, but his game is showing no signs of decay and the three-time NBA champ has relished his previous Olympic appearances. He was a key member of the American teams that captured gold in Beijing (2008) and (2012), performances that helped him and the U.S. squad erase some of the disappointment from taking bronze in Athens (2004). Krzyzewski, the Duke coach who led the U.S. team to three consecutive gold medals, had a hand in naming Popovich as his successor.

James is very high on Pop as a coach.  Earlier in the week he said he considers Popovich, who has led the Spurs to five NBA titles, “the greatest coach of all time,” fittingly comparing him with New England’s Hooded Icon.

I’ve said that over and over and over,” LeBron insisted, “You have to be sharp, mentally and physically, when you go against his ballclub. If you were an NFL player, it’s probably the same as going against a (Bill) Belichick’s team.

One thing that you cant take from King James is that he has respect for the legends of the game. The guys who have proved their dominance over a substantial time span.

James is all too familiar with Pops X and O’s gangsta, having lost twice to teams coached by Popovich in the NBA Finals — in 2007 with Cleveland and in 2014 with Miami.

LeBron continued to pontificate on his admiration for Pop, age 67, who still attacks his craft like an energized 40-year-old. 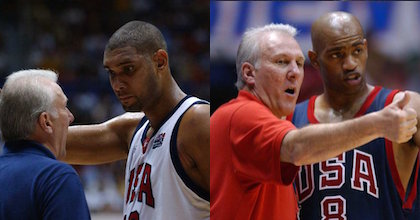 “A guy that’s been able to do what he’s done in an era of basketball where it’s changed so much and he’s been able to have a growth mindset and be able to change with the game,” James said. “Obviously Tim Duncan was a huge part of that because Timmy was allowed to change with the game as well, but he’s just continued to build around…Manu (Ginobili) and Tony (Parker) and bring pieces in and out throughout his whole tenure.”

Seeing King James back in the Olympics for somewhat of a grand, international farewell tour would be tremendous. All he has to do now is enter one Slam Dunk contest and his fan-inspired bucket list would be complete.