First and foremost, Kevin Durant has the right to do whatever he wants.

As a free agent, KD could have stayed in Oklahoma City. Instead, he decided to bounce and join the arch rival Golden State Warriors.

By doing so, he opened himself up to getting bashed by fans and criticized by the media. It simply comes with the territory.

Let’s face it. Durant is the first MVP-caliber player to join a team that just knocked him out of the playoffs.

And, it just doesn’t feel right.

In fact, for many, it stinks, reeks and feels slimy.

But few should really be shocked at what has happened in NBA free agency 2016. This is how this generation gets down.

Just like LeBron James, KD looked for the easy way out, the path of least resistance.

This is that AAU mentality that has overtaken modern athletes.

Years ago, the three or four best basketball players in a city like Detroit would be on different teams, they would do battle against each other in hopes of when the dust settled that they would be considered the best player in the city.

Yes, that was the prize. People would honor and respect that. You weren’t afraid to lose. It was the opposite. You wanted to win. That was the motivation.

Not anymore. Sadly, guys want to load up a team. Those three or four studs in Detroit now sign up for the same AAU team, steamroll the mediocre competition and then get to claim that their team is the best in the city. This, despite the fact that they didn’t play anyone.

Oh yes, Durant leaving the Thunder to join the Warriors is more proof where these modern day NBA players are.

Weak might be too strong. Lame is probably the better word.

There’s no way you can’t think that Durant figured, If you can’t beat ’em, you join ’em.

Durant wasn’t languishing on a bad team with no hope in sight for a championship. Durant wasn’t stuck in NBA Siberia – with no coat, no less.

First, Durant’s team had already been to the Finals and lost. Secondly, hia team this past season was on the brink of upsetting the Warriors. The Thunder were up 3-games-to-1 in the best-of-seven Western Conference Finals.

Durant and company just needed one win in the final three games to reach the Finals and send the record-setting Warriors back to the Bay Area.

For sure, fans around the league won’t be rooting for KD and the Warriors. Nope. Instead, they will be rooting for parity, against super teams that throw competitive balance out of whack.

In a league which usually only has 3 to 4 teams talented enough to win a title, many fans are turned off.

And with good reason. Since 1991, only nine different teams have won an NBA title. Three teams have won four or more championships: Bulls (6), Lakers (5) and Spurs (5).

Worse, in the last six seasons, LeBron has gone to the championship every year.

And another point of frustration for NBA fans, the only team to win a title without a superstar player was the 2004 Pistons. They beat the Lakers who had four potential Hall of Famers in their starting lineup that season. 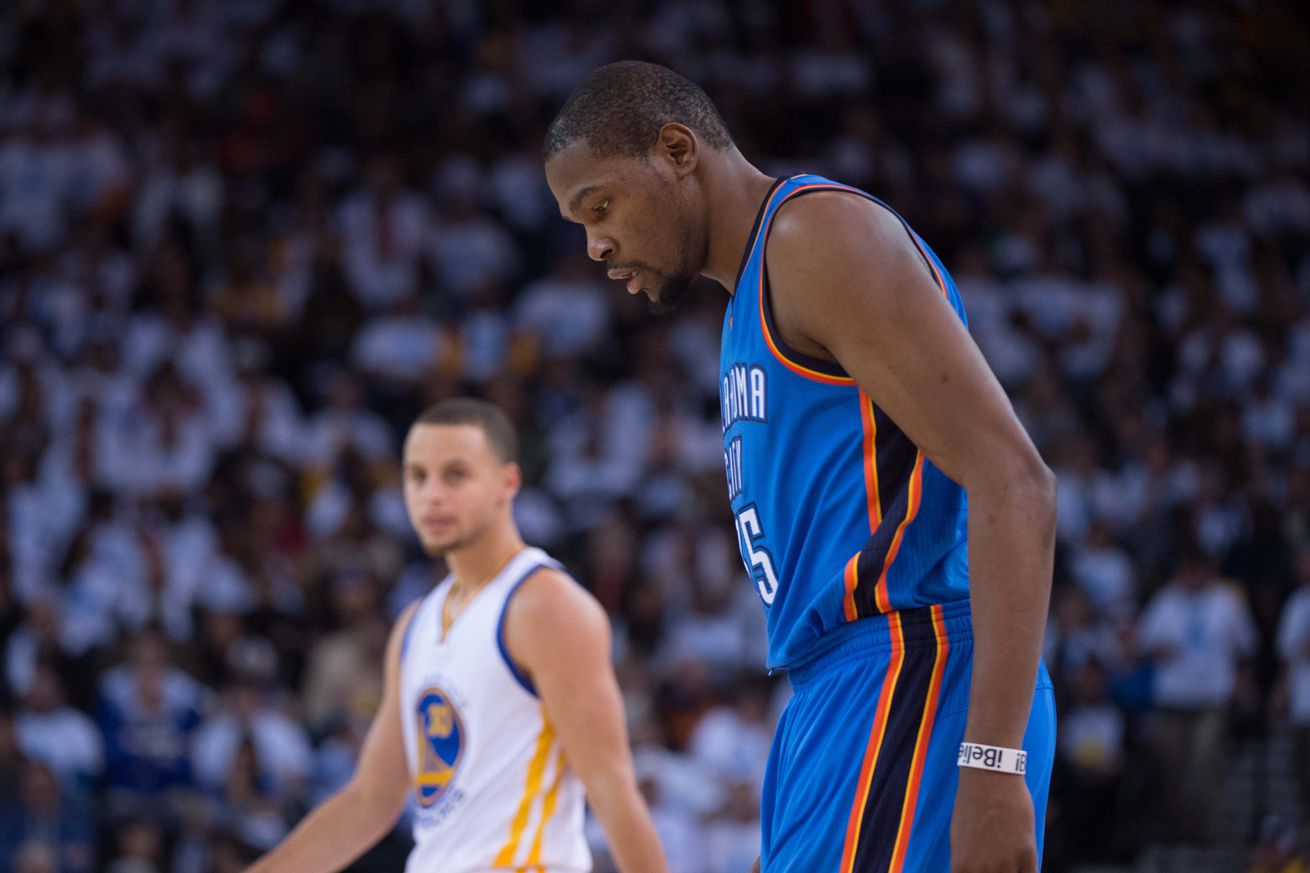 Conversely, there is real parity in baseball. In the same time period, there have been 13 different MLB champions. Plus, before the Giants won in 2012, MLB had six different World Series winners in six years.

Better yet, 20 of the 30 teams have made it to the World Series.

In the NFL, championships are spread around better of late after a slew a dynasties like the 49ers, Cowboys and Steelers.

Starting with the Super Bowl in 1991, there have been 14 different champions, including one by the Tampa Bay Bucs, once a laughingstock for most of the expansion franchise’s existence.

Fans would love to see similar results in the NBA. Fans don’t want to invest time and money into a meaningless regular season so that the Cavs and Warriors can play every year for the title.

Durant’s move has done two things. 1) stripped him of individual greatness and 2) ripped off NBA fans searching for some kind of parity.

For that, KD deserves all the push-back he gets on HIS decision.