One of college basketball’s influential icons, barrier breakers, winningest coaches, and cultural transformers has passed at the age of 78.

In life, you have kings and kingmakers. Then of course there is Coach John Thompson. The sometimes outspoken, but humble giant. Such a formidable presence, especially in the world of basketball and the DC area, that Mount Kilimanjaro might come to mind. A man whose impact on the world matched the size of his frame and the length of his legend.

At first glance, people would mistake him for a WWF wrestler or a professional basketball player. Standing at 6’10 and over 270 pounds, make no mistake Coach Thompson definitely was that. The DC native played ball at Providence College and was one of the main cogs on their 1963 NIT championship roster featuring Irish sharpshooter turned politico Ray Flynn.

Thompson, a collegiate All-American, led the Friars to an NCAA tournament berth before he was drafted by the Celtics. His aptly titled nickname “The Caddy”  made all the sense being he played back-up for a man many feel already had a place on basketball’s Mount Rushmore. The Celtic gentleman whom John Thompson shared tick with goes by the name of Bill Russell–arguably the greatest center ever.

But if you think Thompson’s five-plus career in the league is the final chapter you’re sorely mistaken.

The adage, “When the player is ready, a teacher appears” sums up Coach John Thompson. Mentored by fellow Hall Of Fame coach Red Auerbach, Thompson made his indelible mark at Georgetown University by championing the rights of his Black players and mentoring many great ballers and future NBA stars like Patrick Ewing, Dikembe Mutombo, Allen Iverson, Alonzo Mourning, and more.

Ewing and Iverson were two of the most polarizing Black athletes to ever play an NCAA sport. Their careers marked two significant cultural shifts in college sports and embodied the racial firestorm that America becomes when Black people stand tall in their freedom of individual expression.

Ewing was an impenetrable force in college and to this day, the most defensively intimidating presence in Big East-era, college hoops.

In those years, Thompson and Ewing sparked an athletic and cultural revolution and re-directed college basketball’s focus on the East Coast and the flashy, gritty, aggressive, intimidating and cocky brand of ball that was sweeping the nation. It also became the breeding and feeding ground for an upstart all-sports cable station named ESPN.

The Big East Conference and hip-hop music blew up about the same time, the mid to late 80’s into the early 90’s,” said rapper and sports aficionado Masta Ace.

Then the street fashion changed to match what the ballplayers were wearing. Then cable TV started bringing them into homes across the country. They were like the local drug dealers in stature. You had the St John’s Starter jacket, your Syracuse basketball outfit, Your Georgetown Nikes and starter jackets.

Thompson, Ewing and the Hoyas were the team that really created a fashion culture. Before these guys came on the scene, ballplayers wore collared shirts and slacks. Then Ewing’s Hoyas hit the scene with an urban swag never highlighted on prestigious college campuses. They wore sweatsuits and sneakers and hats with team logos and names. That culture oozed into the streets and dictated one’s allegiance to a team. We rocked the summer shorts with the pro logos plastered on them and the college team boxers.

There’s actually a Georgetown Starter featured at the National Museum of African American History and Culture It was established by Act of Congress in 2003, following decades of efforts to promote and highlight the contributions of African Americans. To date, the Museum has collected more than 36,000 artifacts and nearly 100,000 individuals have become members. The Museum opened to the public on September 24, 2016, as the 19th and newest museum of the Smithsonian Institution. 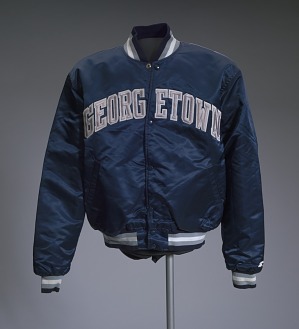 You definitely had G-town because the whole team was us, Black, so we embraced them immediately, Ace told The Shadow League. They were a source of pride at a time when gang violence and crack was ripping communities apart. Although I loved being from NY and I supported my Brooklyn homie Dwayne “Pearl” Washington and Syracuse; we still rocked with Georgetown.”

Before Allen Iverson moved mountains and challenged the conservative and culturally-inhibitive framework of the NBA, he was the golden child of basketball and football growing up financially impoverished in the Newport News-Hampton Roads area. He survived the hood and a racist, old school Southern public lynching that would have him rot in prison rather than fulfill his star destiny. He became a symbol of black justice in this country when the only African-American Governor in Virginia’s rich confederate history pardoned his sentence. Georgetown and John Thompson stepped in and awarded him a scholarship and safe haven to pursue his inevitable NBA legend.

.Thompson also provided the tough love that Iverson would need to polish up his act a bit and prepare for NBA stardom.

The rest is history.

A.I. was inspired by survival and he became the mouthpiece and poetry in motion for a generation of ballers who came from nothing and overcame tremendous socio-economic odds to reach the land of wealth and health.

Generation Xers followed his every move from his cornrows and durags to his baggy jerseys and trunk jewelry. He was the perfect blend of baller with a rap persona. He represented the Black kids of his generation and influenced the white kids who wanted to ball like Mighty Mouse.

During a coaching career that spanned more than 27 years, the defensive-minded Thompson clutched 596 wins in his back pocket, much like his trademark white towel, en route to 24 consecutive NCAA postseason appearances. Within this time period, he applied his patented full court pressure on not just the Big East, but every decorated program in Division I men’s basketball.

Influencing the culture and impacting the future of the game and inspiring the African-American community is where he separates himself from any other coach to ever do it.

It should be noted that Thompson, the first African-American coach to win a national title, very well could have had a three-peat. The Thompson-led Hoyas had a heart-wrenching loss in 1982 to a UNC team that featured a young Michael Jeffrey Jordan, front-court studs James Worthy and Sam Perkins. After trumping Hakeem Olujaween and the University of Houston for the title in 1984, they narrowly lost to the underdog Villanova Cats in the title game in ’85.

Thompson won seven Coach of the Year plaques during his award tour. And with good reason. Thompson encouraged all his young stars to go the distance on both ends of the floor. His legacy was with the players. Coaching was and will always be his crowning moment.