John Spooney is setting himself up to be smack dab in the middle of an American rugby revolution. Hes one of an influx of athletes from traditional American contact sports like football who are picking up rugby and boosting the American talent pool at the international and professional level.

Rugby is the best of all the sports Ive played, said Spooney. “I really like the fact that you can run, make someone miss and run him over and pop up and come back 20 seconds later. I like the completeness of the game and also I take a certain pride in being able to play 7’s rugby because it’s more than just strength…It’s power and quickness…you have to have it all.

As Team USA attempts to compete with the rugby powers across the globe, the mission is clearly to take advantage of the wide pool of American athletes with a multiplicity of skills that translate well to the sport.

This rise in rugby participation by athletes who once played traditional American sports like football and soccer is also no coincidence.

When the USA upset traditional rugby powerhouse New Zealand at the Dubai World Sevens in 2015, it was Perry Baker, another lightening fast, African-American, ex-football player (Philadelphia Eagles), who with virtually no time left, avoided three tackles to score a try and tie the game.

That historic win officially marked the dawn of a new age of American rugby: an age where American rugby players are feared and not laughed at. Where American rugby programs are rich in diversity and no longer picking from the bottom of the athletic barrel for potential players, or seeking talent in exclusive social enclaves.

America is now a country where rugby, believe it or not, is becoming an attractive alternative to the violent nature of youth, college and NFL football.

With elite athletes like Spooney leading a philosophical shift, USA Rugby will now have the power, physicality and speed needed to be a platinum squad in 7’s.

Call It A Comeback

Back in the 1920s, America shocked the world and won rugby gold. It was the equivalent of a team from Germany winning the Little League World Series.

No one thought this compilation of American college students had a chance to defeat the lauded French National team, who lost to the Americans in the gold medal game in Belgium in 1920 and then again in Paris in 1924. 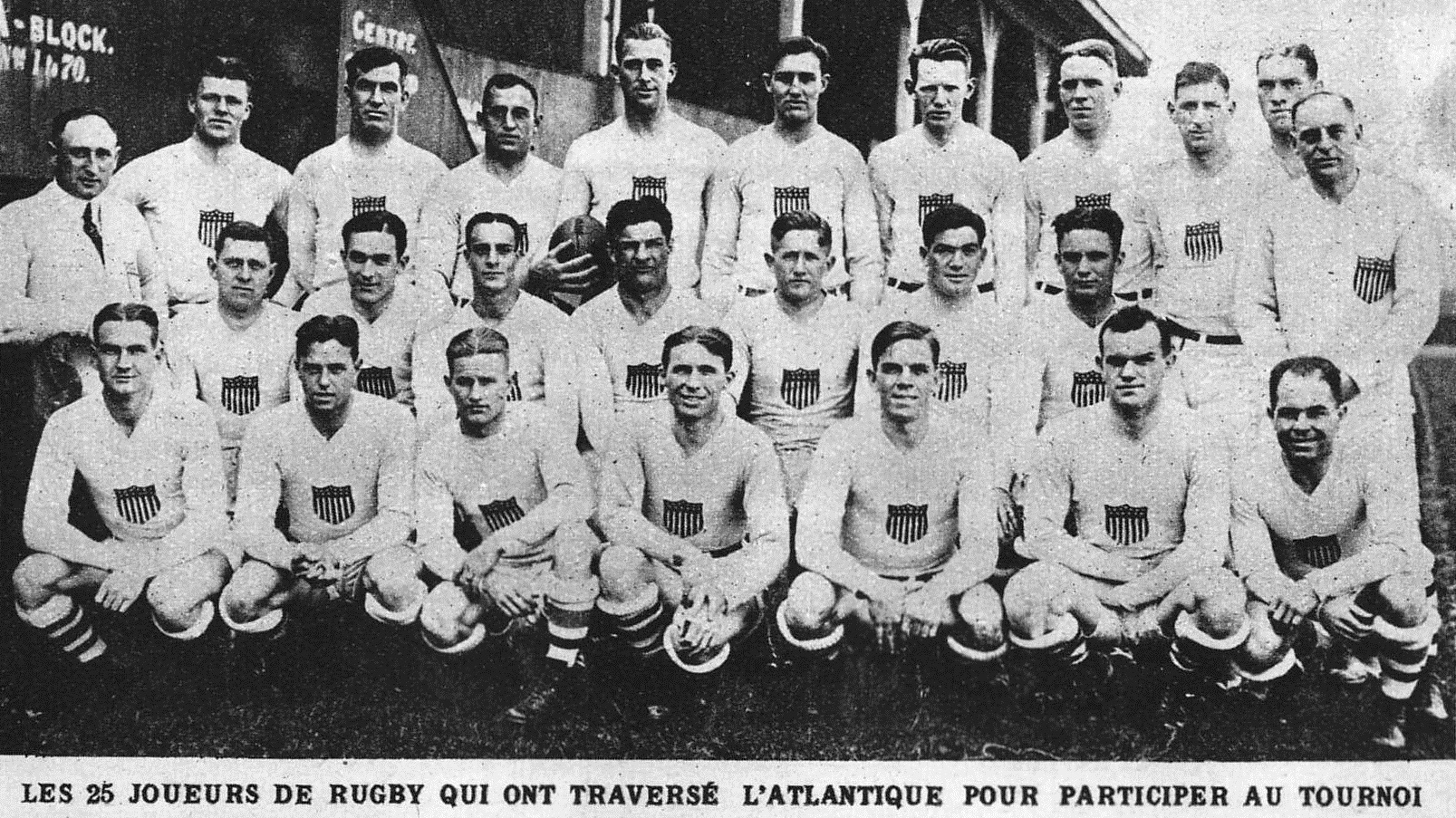 Ironically, what turned the US into an early 20th century rugby power was a crisis in American football. At the turn of the century, there were some issues with the safety of American football and rugby became a popular alternative on college campuses.

Bob Latham, Chairman of USA Rugby, mentioned on an Olympic news segment that President Theodore Roosevelt actually considered banning football after newspapers exposed a rash of injuries, reporting that 19 football players had been killed in 1905 and called it a Death Harvest.

In fact, Stanford and Cal dropped their football programs for a few years. Those West Coast players took up rugby and comprised the core of the rugby team that won gold in Europe.

Entering these 2016 Olympics, Team USA is expected to be a serious contender to medal. That may come as a surprise to some, but if you believe that history is just the world repeating itself, then the United States recent rugby re-emergence and Spooney’s rugby obsession makes sense.

Skills to Kill the Pitch

Rugbys a sport that encompasses every skill Spooney utilized as a standout running back for Brown University, and those he flexed on the track as a lightening fast sprinter at the University of Michigan.

Spooney: With football… I was able to learn how to run as far as looking at how people were pursuing me and taking advantage of different cutting lanes and accelerating. Track helps of course with speed, but most importantly the stamina needed to push through when your legs are weary and complete a rugby game, which is something I underestimated.”

These days, Michigan is where you can find John — his football and track days behind him — getting it in with the Wolverines Sevens rugby squad. He has an ultimate goal of playing professionally and for the US Olympic squad in 2020.

A concussion during his sophomore season pushed Spooney, who was also carrying a rigorous academic load, to stop playing football his junior year to concentrate on school and track.

Spooney: It was kind of crazy. The first year it was fine and that second year it got crazy with my academics as a pre-med student and thats also when I started getting more playing time for football as a running back, but then I had the head injury that year which was also part of the reason I decided to not do football anymore…at least temporarily…the coaches always said I could come back…track was going well.

Spooney shined on the track, first at Brown University where he won five Ivy League titles in the 100m (three) and 200m (two) dashes and graduated with a degree in Biology.

Then at Michigan for grad school, where he is getting a degree in Kinesiology. Despite tearing two hamstrings leading up to the 2014-15 Big Ten Championships, Spooney was Michigan’s Academic Athletic award winner in 2015 and became the second-fastest Wolverine in U-M indoor history when he ran 6.70 in the 60m dash at the Notre Dame Meyo Invitational last February

Spooney: During that offseason part of track, for two weeks I would sneak and go to the Brown rugby practices so that’s kind of how I got exposed to rugby. Then after I graduated, I played a full summer of Sevens rugby just with a random club in Cleveland and that’s how I got exposed to Sevens. Its something I enjoyed that took the place of football.

There was a time when Spooney wasnt sure if anything could replace football, which is a sport his father John tricked his mom Yolanda into letting John Jr. play as a young boy in Ohio.

Spooney: I grew up mostly in Ohio, but I was born on an Air Force base in Virginia and lived on a navy base in Florida for three of four years. My dad was big on football and actually was the primary reason why I played the sport.”

“One year we were in the car going to sign up for baseball and softball, which I played every year up until that point and he told me, ‘We are going to say we missed baseball sign ups and you have to play another sport so we signed up for football.’

It was a decision that made sense because Spooney would go on to bless the record books at Brown University in his senior season, despite missing his entire junior year.

Spooney led the Ivy league in rushing, while ranking fifth in the nation with 130.0 rushing yards per game as a senior. He became the seventh player in Brown history to rush for 1,000 yards or more in a single season, totaling 1,170 yards (fifth-most all-time) and was named first team All-Ivy and All-New England.

Spooney tried out for the NFL, but was a late cut by the Baltimore Ravens in 2014 and that officially closed the chapter on his football career, opening the door for track and ultimately rugby to receive his full dedication and energies.

Spooney:  “After that summer playing rugby in Cleveland, I knew I wanted to get back to rugby after I was done with track and I contacted Michigan rugby coach Coach Brandon Sparks. He teased me ever so slowly into Michigan rugby. I started playing with the mens team here and during the fall I played a couple of weeks with the 15s during that season and then I recontacted Coach for Sevens and have been playing with those guys since December. Coach and the team members have really helped me out with my transition.”

Staying Ahead of a Growing Curve

Spooneys plan is to make the Olympic team in 2020 and pursue rugby professionally. Right now, he says hes trying to figure out ways to go ahead and do that.

His transition from the gridiron to paddock might seem odd, but its becoming more and more common. We recently did a story on USA Rugby member Carlin Isles, who transitioned from NFL hopeful with the Detroit Lions to rugby superstar very quickly.

Rugby star Jarred Hayne went from rugby superstar to a member of the NFL’s San Francisco 49ers because of how effortlessly his skills as a fleet-footed rugby fullback crossed over to the big stage on Sundays.

After one year in the NFL, Hayne returned to rugby in pursuit of Olympic Sevens glory with Fiji.

The current 7’s rugby is perfectly suited for guys like Spooney, who crave contact and constant action, but want to minimize the health risks.

Sevens games are very short. Its like traditional rugby on acid. Just two seven minute halves with just a two-minute break between. Players are running constantly from the first to the last whistle of the match. It requires an athleticism that wasnt as essential to old style rugby.

While Spooney, a self-proclaimed “patriot,” watches Team USA go at it in Rio this summer, he will also be working to make his own dream come true and improving on the many aspects of rugby that he is yet to master, like kicking the ball.

Spooney: Coach Sparks is credited with being a 7’s specialist. He has an academy about a half hour north of here that I’m going to start attending every Tuesday and Thursday to get more rugby exposure and play more tournaments. I will just look to his guidance as to what the next steps are.”

Ten years ago, Spooney would be considered an anomaly of sorts. Today hes another ex-football player and one of a growing legion of talented athletes looking to transition into pro rugby as a viable career choice. Anyway you shape it, thats great for the future of the sport.