Two NBA stars who will be pivotal to their teams success in these playoff are battling injury and illness, but now is not the time to succumb to the complications of the human anatomy.

Utah Jazz star Gordon Hayward was forced out of Game 4 against the Clippers after playing just a few minutes with a foul stomach flu. Luckily Joe Johnson is still Big Shot Joe when it comes to playoff games, and he led the Jazz to a huge 105-98 win. 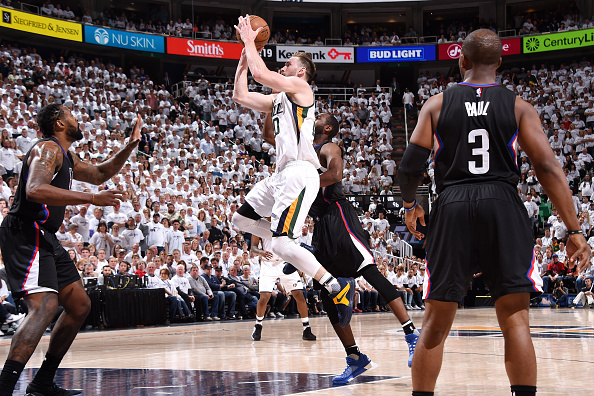 Tonight is a pivotal Game 5 and according to Tony Jones of The Salt Lake Tribune, Hayward will try to give it a go.

Food poisoning will be no obstacle for his playoff grit and determination. Hayward spent the night and the first part of Monday in his bed trying to recover and his coach knows if he can go, he will.

“Even when he was sick, there wasn’t any way Gordon wasn’t going to try and give it a go,” Jazz coach Quin Snyder said. “It shows how he feels about the team, his teammates and this playoff experience. I took him out at one point to give him a blow, but I knew after the first quarter there wasn’t much there. There wasn’t anything he could play through, he was just so depleted.”

If Hayward isn’t able to play in Game 5, that negatively alters things for the Jazz on paper. In Game 3, he scorched LA for 40 points. That’s true, says Snyder, but It doesn’t change them philosophically.

“It’s beyond next man up for us,” Snyder said, of dealing with yet another injury. “It’s really a process of the day. We’ve really become numb to it. It’s almost like the weather.”

“Like A Sprained Ankle, Boy, I Ain’t Nothing To Play With“

James Harden revealed on TV after a tough Game 4 that its been hard for him to make the same speedy cuts and bursts to the hoop since he rolled his ankle in Game 3 of the first-round series against the Oklahoma City Thunder.

But Harden mentioned it and made sure we all knew that he was hindered by a janky ankle more than anything OKC and his MVP challenger did defensively.

Harden also assured the basketball world that he wouldnt miss Game 5  tonight for the world.

“Got some treatment, and I’ll be ready to go tomorrow,” Harden said before Monday’s practice.

“It’s the playoffs, everybody is banged up, so you just gotta find a way to fight through it and find a way to help your teammates win games,” Harden told NBA TV.

“For me, it’s not necessarily scoring. I don’t have to score a certain amount of points as long as I’m making the right plays and guys are getting shots, everybody is in a good rhythm — that’s all that matters.”

Hardens unselfishness is what allowed his Rockets to pound out OKC despite a very sub par game from their best player.

Its suck it up, dog time right now, and both of these warriors have no choice but to suit up and chase the chip.