James Dolan admitted he made a mistake.

No, not a real dude admittance that would require a public apology to Charles Oakley and Knicks fans. But his actions following his banning of Oakley from MSG on Friday prove that he underestimated how much Knicks fans love Oakley and how much New Yorkers are sick of a loser owner who produces loser teams and does loser things daily.

Dolan represents everything bad in America today. He’s the rich guy who thinks he can abuse and disrespect anyone who disagrees with him. The fans, media and prominent African-American NBA players reacted to the Oakley situation immediately, bombarding social media with criticisms of the chubby guy that has never bounced a basketball, but did manage to turn a once proud franchise into the NBAs laughingstock.

Dolan was on his billionaire flex when the Oakley fiasco first popped off. He didnt seem to give a funk about what anyone thought. Then, as public sentiment bubbled over into a Dolan-bashing parade, making him the second most hated business mogul in the USA after Trump, Dolan decided to call some ex-Knick flunkies in to sit with him court side at the Garden as if that proved something, 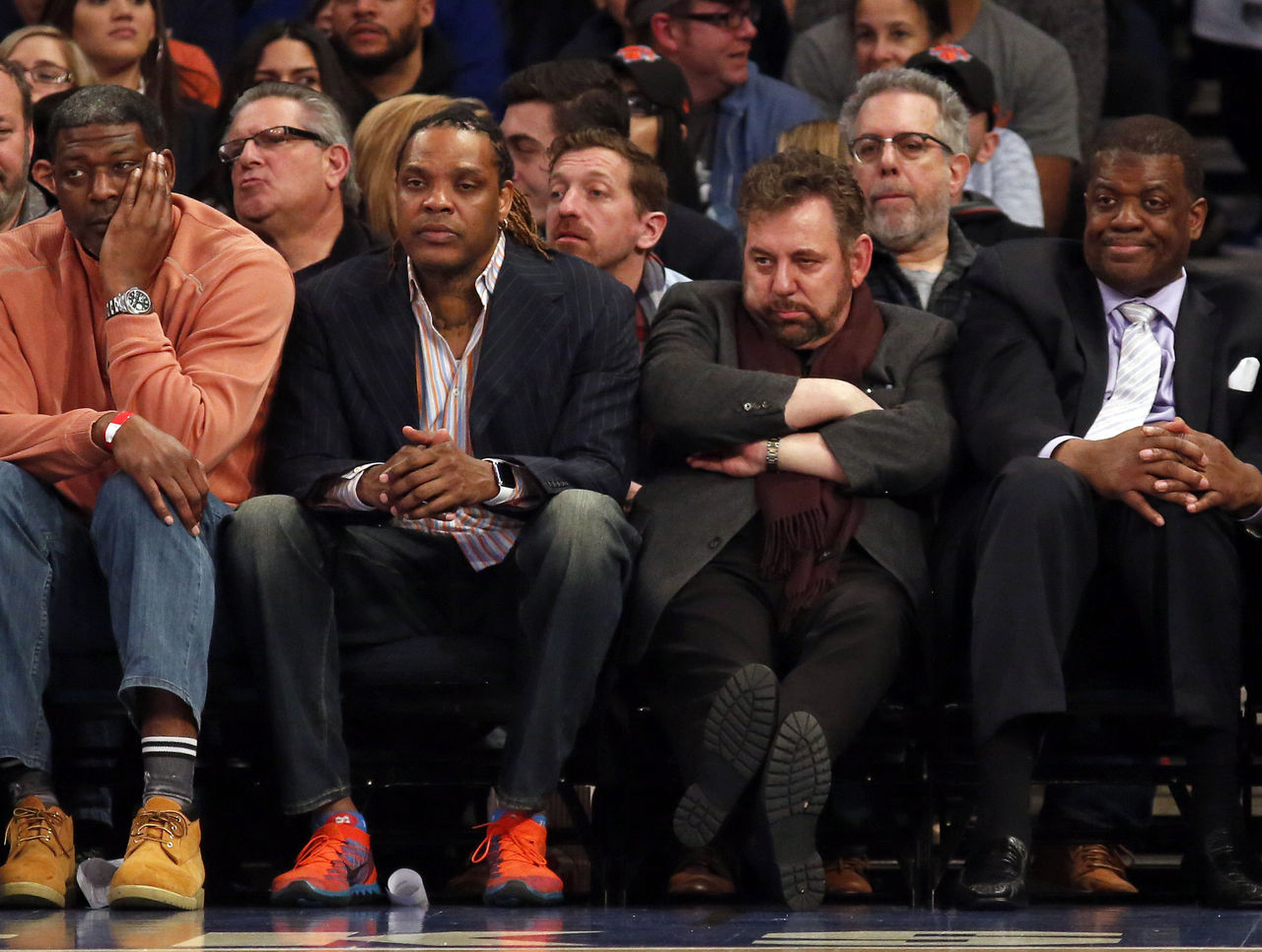 He expects us to believe that Latrell Sprewell (of all people), Larry Johnson and Bernard King (TERRIBLE look for a Brooklyn legend) willingly came to the Garden to support an owner who supposedly has a solid relationship with some past superstars. Its been 14 years since we saw Spree at MSG. Coincidence?

Those checks must have been super fat. It was also sadly symbolic. Proof that the slave trade still exists.

Yes, the appearance of the Three Broken Negroes was sickening to most Knicks fans stomachs. It was such an obvious display of pompous horse manure that it backfired and made Dolan look even more idiotic and out of touch.

What was he trying to prove ? How stupid does he think people are? Well, if he followed Donald Trumps strategy, America is full of down-low racists, idiots and bandwagon losers. Unfortunately, basketball ain’t politics so Dolans move just angered Knicks fans further.

People started talking about boycotts and Al Sharpton got involved. So what did Dolan do as the Oakley situation picked up momentum and his support was pretty much non-existent ?

He calls on Americas No. 1 Negro Michael Jordan and Commissioner Adam Silver to mediate the situation between him and Oakley.

Its a shame that the Knicks are run by a clown who cant just apologize for disrespecting a brother. If the story went down as Oakley says, what the hell do those guys need to kick it about? And what could The Commish or MJ do that a phone call and apology from Dolan couldnt handle.

We know all of this is disingenuous garbage by an owner that doesnt want to lose any money and figures if Trump can win the Presidential election, he can smooth this over by selling New Yorkers a bag of bunk.

Well, Im not buying and neither is anybody I know that fancies themselves a (former) Knicks fan. Of course a significant boycott would be difficult anyway because the majority of people that go to Knicks games are corporate suits who want to rub elbows with celebrities and are barely, if at all, interested in the product on the court. Everybody is a reality groupie these days.

The heart of the city, however —  those hard-working, loyal fans of all ethnicities who keep the franchise standing and meaningful — can’t bare to smell the stench coming from anything Dolan does. It didn’t just start today. Folks have been asking for his head since the Isiah Thomas days, which don’t seem so bad when you consider where things are at right now.

Regardless of what MJ or Silver try to sell us, the past week has shown us that Dolan has no respect for the city, the team, the history of the Knicks and even less respect for black men.

It gets no better when it comes to women. He respects them even less. When the Rockettes didn’t want to perform at Donald Trump’s inauguration because of the President’s history of blatant disrespect towards women, Dolan insisted that they need to be “more tolerant” and said the performance didn’t mean they were supporting Trump, but he needs Trump supporters to want to go to Knicks games because as greedy James put it, “I gotta sell tickets.”

Dolan once again proved that behind all of that Cable money is a shallow, empty cat who doesn’t care a lick about his employees, their beliefs, their rights or well being.

Thats all I get from this situation.  If you choose, you can use your alternative facts to make it what you want.