At times when we watch shows that are steeped in another era, it is easy to forget that much of what we’re witnessing on the screen is a reinterpretation of cultural cues that happened decades ago. Aside from the clothing, some choice slang and a few select visions, the young men and women of The Get Down are being schooled on the intricacies of a bygone era line by line, episode by episode.

Recently, I spoke with actress Herizen Guardiola, who plays young South Bronx ingenue Mylene Cruz. In the series, Mylene is on the verge of stardom, yet struggling to balance family, relationships and friendships against what she really wants. Coming from a family with a unique blend of cultural cues helped mold her into the person she is today. 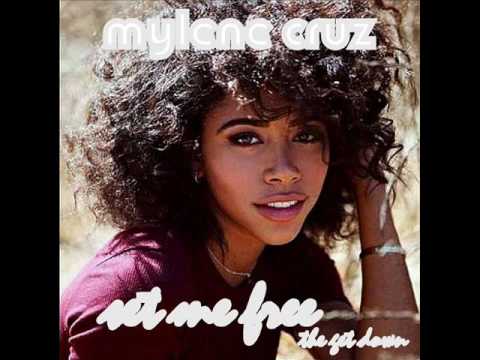 During her upbringiing, Guardiola’s home was a no Hip-Hop zone for much of her childhood.

“I was raised on classic rock, doo wop, and my Mom’s a Buddhist so a lot of chanting,” she said. “I would go to the Temple and do chants. My Dad is a reggae musician. So, like, I wasn’t allowed to listen to Hip-Hop. I didn’t start listening to Hip-Hop until you reach that age where you want to rebel.  It was like, ‘I’m going to my friend’s house and listen to some Fergilicious!'”

“Honestly, that was the first sort of Hip-Hop beat that I ever listened to. From there I started getting more into Soldier Boy and all that, which really is not the best music. Hip-hop in the early 2000s, when I was going through that stage, was not the best. I was learning those songs. Then, I went through a Goth phase.”

Music that was originally crafted by the descendants of slaves is all about rebelliousness, especially Hip-Hop. Originally, it was something of a sonic revolt against poverty, against racism and against conformity. However, today much of the original tenets of this once sacred music genre have been scrubbed out in the name of the almighty dollar above morals and rules.

Herizen told me that her knowledge of Hip-Hop came at a trickle in the beginning, but she eventually was inundated with the quality aspects of the culture and music.

“My Mom was eventually like, ‘Okay, she’s going to do it so I might as well let her.’ She did that because I’m an artist and I need to hear different types of music to create. My Dad was completely against it. Still is. Still can’t play music in the car with him. It’s strictly reggae, old rock or doo wop with him, still.”

But since she was cast in The Get Down, Herizen has not only been schooled by acting out the particulars of that time frame long ago that crystallized a culture and eventually the entire country, she was actually schooled by some of the legends she came into contact.

One would imagine that executive producer Nas had a significant hand in that education as well.

“I have a lot of Hip-Hop influences now,” she said. “I love Kendrick Lamar, ASAP Rocky, J. Cole. I listen to their music especially. Those beats, that hard hitting bass, is something that makes you feel. I started dancing Hip-Hop when I was 13. All of that came together.”

“Now, I’m learning about this and how it has changed and developed. I’m like ‘Oh my God! I can’t believe I missed out all this time, Dad!’ But I’m happy that I got to experience through the eyes of the actual people that created it. That was really dope.”