Aaron Hernandez is expected to be arrested on charges of obstruction of justice after destroying video tapes, breaking a camera and paying for a cleaning service just a few days after an alleged murder. Thus far, there isn't any evidence that Hernandez was more involved in the crime, though authorities state more charges could be added as the process unfolds.

The Miami Heat took home their second title in a row after an epic battle against the Spurs in Game 7. Here is some of the aftermath. 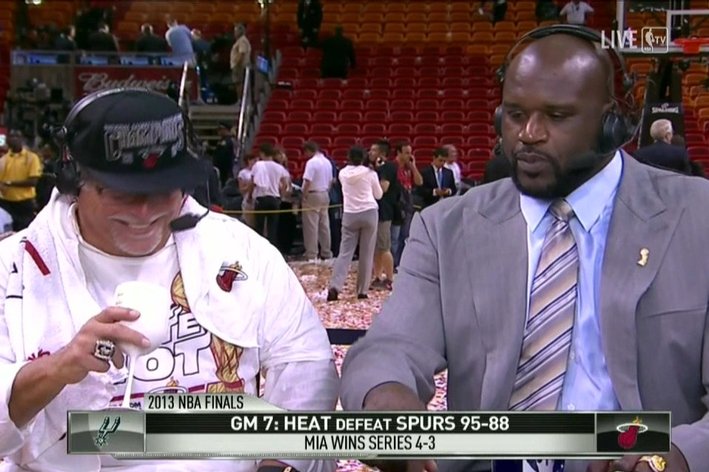 Alex Rodriguez is rehabbing well from his surgery and might be ahead of Derek Jeter on the road to recovery.

Kobe Bryant named his all-time starting five and did not include himself.

Juan Manuel Marquez and Timothy Bradley both discuss Manny Pacquiao ahead of their October clash.

If a team announces a $63 million upgrade to a stadium but doesn't have the money to pay for it, does the upgrade happen? We'll find out in Jacksonville.

BJ Upton says he isn't sweating his first-half struggles, though the Braves lost the series finale to the Mets, 4-3.

A$AP Rocky will release an instrumental-only album for free at the end of the summer.

Drake and J. Cole went to go purchase Born Sinner in a store.

The Dish asked people to read some of Kanye's more ridiculous and racially charged Yeezus lines on the street.

Talib Kweli discusses the 18-page booklet that comes with his latest album, Prisoner Of Conscious.

There isn't a single black person on the jury in the George Zimmerman case.

Eight were arrested in Spain with connections to Al Qaeda.

The Obama campaign has been forced into a new strategy to get bills passed. Mainly, doing so in secret, because Republicans may want to support him but can't appear to be doing so publicly…because he's a Muslim (well, you know what I mean).

Complaining about water quality in Tennessee might get you thrown in Gitmo. Here's an actual quote that he repeated verbatim after his audience was shocked: "We take water quality very seriously. Very, very seriously," said Sherwin Smith, deputy director of TDEC's Division of Water Resources, according to audio recorded by attendees. "But you need to make sure that when you make water quality complaints you have a basis, because federally, if there's no water quality issues, that can be considered under Homeland Security an act of terrorism."

More than one million people took to the streets in Brazil to protest their government.

Everyone growing weed in Cali is messing up vital ecosystems.

A Federal employee confirmed almost all of Edward Snowdens claims about the NSA during a Senate hearing. It was also revealed that the NSA can keep information on potential suspects for as long as they like, building profiles over years just in case someone actually commits a crime. Have you seen the Minority Report?

Domo Genesis drops off a new track set to appear on the Ashley Outrageous mixtape.