In the last few weeks, we have seen discussion of Muslim womens clothing come at highs and lows.

The Rio 2016 Games brought us stories of incredible athletes – including largely positive coverage of Bronze medalist Ibtihaj Muhammad, Team USAs first hijab-wearing Olympian. We also saw numerous (and often reductive) discussions of Egypts beach volleyball team of Dooa El-Ghobashy and Neda Meawad, who were fully covered during their competition- a first in the history of Olympic beach volleyball.

The optics of Muslim athletes are important for young girls in society. Seeing women involved in every level of physical activity is crucial in order to develop young girls and increase levels of participation in sport.

In an earlier piece for TSL, I wrote of the injustice of banning hijabs and womens chosen clothing from professional sports. This injustice can stem from a need to control womens bodies under a guise of concern safety, or a belief that that particular clothing is oppressive.

The burkini, a swimsuit created for Muslim women to enjoy swimming, surfing and water play has become the center of this debate in France. It has been the subject of global outrage. Although a resolution has been reached, I feel this issue is far from over.

When a municipal French government announced that they would be banning burkinis in certain small cities along the French Riviera, I must admit I rolled my eyes. The words of Cannes Mayor David Lisner sounded nonsensical.

In late July he issued an ordinance and also declared that the reason behind banning the modest swimwear from French coastal beaches was because burkinis, “could risk disrupting public order while France was the target of terrorist attacks”. Lisner maintained that the burkini is a symbol of Islamic extremism.

Another French Mayor argued that he would ban the burkini for hygienic reasons. I considered this another attempt to control the clothing choices of Muslim or Arab women in a country that barely conceals its blatant Islamophobia- in sport or in daily life.

Of course I dismissed it. It seemed ridiculous to believe that the burkini- water-friendly tights and a matching long tunic with a built-in swim cap- could be seen as an example of extremism within French society.

But a recent court decision upheld the ban and agreed that the burkini could be construed not just as a swimsuit, but as a militant and proselytising form of radical Islam.

Contextually, it is important to understand that France has extended its State of Emergency until the end of 2016 following the horrific attack in Paris in Novembe,r and then in Nice in July. Understandably, France is traumatized. So they will ban hijab-wearing women from floating in the ocean.

It is baffling to think that French folks will correlate national security to outfits in bright colors that were designed for Muslim women to frolic on the beach and engage in watersports.

Women caught wearing burkinis (also spelled burqini) would be fined 38 euros ($43) dollars. I suspected that some Muslim women might ignore the ban and attempt to go enjoy a beach day regardless. Particularly when a notable and wealthy Algerian businessman, Rachid Nekkaz, volunteered to pay all the fines given to women charged with violating the burkini ban.

“I decided to pay for all the fines of women who wear the burkini in order to guarantee their freedom of wearing these clothes, Nekkaz said. And most of all, to neutralize the application on the ground of this oppressive and unfair law.”

Last week it was reported that at beaches in Cannes, at least ten women were apprehended by authorities and four were slapped with fines. They must have been escorted off the beach property or asked to leave. I scoffed at the pettiness of French police. Surely, there were greater offenses committed than by women who chose their own wardrobe for recreational activities.

But my mood quickly changed from annoyed to enraged.

A few days ago, I saw a photo of a mother being forced to uncover on a beach in Nice.  In the series of photos published by The Daily Mail, it shows a woman peacefully lying on the sand. She is approached by armed officers. It appears that one of the officers is writing her a ticket, others loom over as the next few photographs show that she is forced to remove the tunic she is wearing.

I cannot imagine her anger, her humiliation and her distress. I shared the photo immediately but soon regretted that decision. It was pointed out to me that constantly sharing this image was further violating the woman. I agreed and deleted the images.

As a Muslim woman who loves water sports and who also chooses to wear hijab, I found the pictures to be jarring. The image of an innocent woman minding her own business and then being forced to disrobe cuts through what we consider her civil liberties, her dignity and her personal freedoms. It definitely upset me to think that her body autonomy was disrespected so publicly.

Furthermore, she was not wearing an actual burkini. She is wearing tights and a long cotton blouse. Will all identifiable Muslim women be barred from beaches- even though technically they arent wearing the controversial swimsuit?

If France is sincerely trying to convince the world that violently forcing women to undress will protect their culture and values, then it seems hypocritical at best. If Right-wing French politicians insist that the burqini is an item of clothing that oppresses women, they arent actually listening to the women who choose to wear it.

In his defense of the ban, French Prime Minister Manuel Valls insists the burqini is a political project that goes against modern society, and is based on the enslavement of women.

Interestingly enough, Valls does not feel that policing womens bodies and forcing them to dress in a manner they do not feel comfortable is not archaic or oppressive. Perhaps accepting and supporting a womans choice of her own attire is not sufficient enough of a liberty by French standards.

Forcing a woman out of clothing is as violent as forcing her into it. It is as simple as that.

Truthfully, I am unclear as to what French authorities think they can accomplish with a burqini ban. Are they trying to minimize the amount of French swimmers of Arab descent?

Will barring women who want to build sandcastles on the shore and wade into the water help integrate people from different communities? Isnt the most quintessentially French thing to do is frolic on a beach along the Mediterranean?

The burkini ban is a way to legislate Islamophobia and exclude Muslim women because of their commitment to their faith. The French authorities seem to be cloaked in bigotry by refusing to acquiesce.

Could it be that France is concerned that burkinis might catch on as a practical fashion fad? It is already a garment used by those who get sunburned easily, or who may have a sun allergy or concerns about too much exposure to strong UltraViolet rays.

In the days following the burkini ban, Aheda Zanetti, an Australian woman who first designed burkinis, said that sales have increased and a majority of the orders are from non-Muslim women. Contrary to what Lisner or Valls might believe, the burqini was actually created in order for women who wanted to participate fully and completely.

The original idea came to Zanetti in 2004 when her niece and daughter needed more appropriate and sporty clothing in which to swim and play sports. The creation of the burqini was, in essence, a design that would allow Muslim girls to participate freely and more comfortably with wider society. 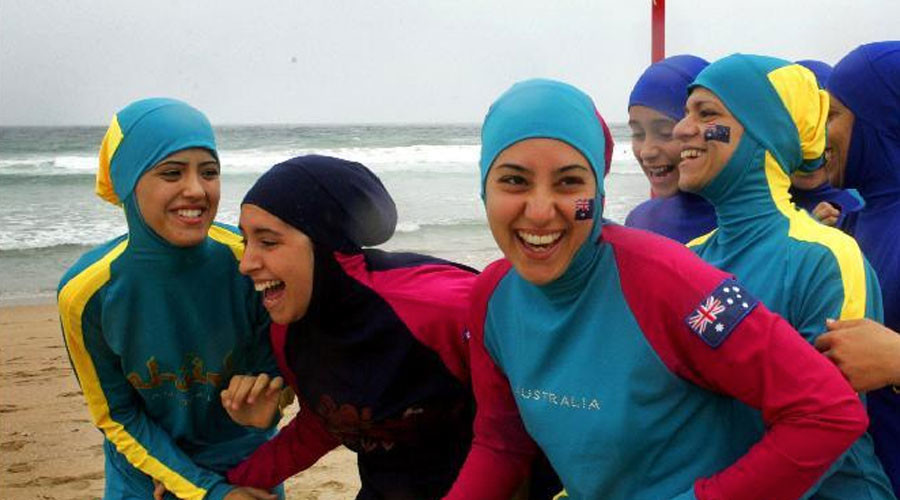 That isnt archaic, it is brilliant.

Zanetti feels strongly that her product and the story behind it are models of empowerment and choice. In an op-ed piece for the Guardian, she says about the burkini ban and to the French authorities, Youve taken a product that symbolised happiness and joyfulness and fitness, and turned it into a product of hatred.

This morning, the Council of State formally overturned the burkini ban that had been implemented in almost a dozen French towns. But the mayor of Sisco has already publicly opposed the courts decision.

Theres a lot of tension here and I wont withdraw my decree, said Ange-Pierre Vivoni. Furthermore, the former French President has declared that he believes that Muslim swimwear is a provocation and should be banned in all of France. Something that he promises to do if elected in next years election.

Many Muslim women around the world enjoy swimming, surfing and other water-related activities. The creation of the burkini and other types of modest swimwear has helped women feel more comfortable while at the pool or on the beach. Muslim women have written of their experiences and how wearing a burkini allowed them to embrace their love for water.

Remona Aly penned a fantastic piece – if a little tongue-in-cheek – on why wearing a burkini is actually quite sensible. But deep seeded issues of misogyny, xenophobia and Islamophobia will not be reconciled over a swimsuit, but Muslims wearing their own attire is a positive step.

Allowing women to choose their own clothes while at the beach, especially those designed for swimming, is the most intelligent thing to do. Including women in local activities will only connect people through shared experiences and amusement.

But it would seem that France is too busy violently protecting its values to be sensible or inclusive.