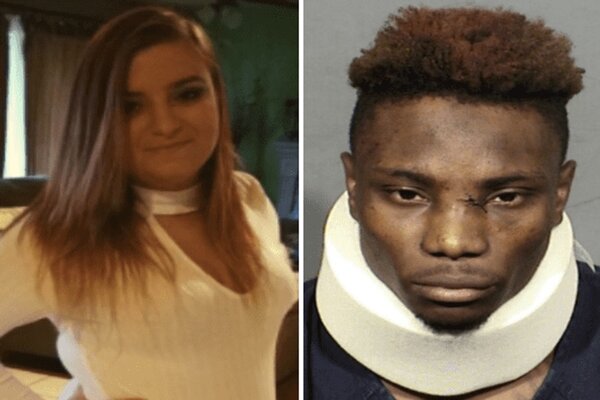 Henry Ruggs III‘s life has been turned upside down by his foolish decision to get in his Corvette and drive 156 mph while intoxicated. Instead of joining his Las Vegas Raiders teammates this weekend as they face the New York Giants, the former Alabama standout is facing two to 20 years in prison and probably won’t play in the NFL again. Prosecutors said his blood-alcohol level was 0.16, which is twice the legal limit.

The family of Tina Tintor, the young woman who died on Tuesday after her Toyota RAV4 was crushed by Ruggs’ car, has released a statement.

Statement on behalf of the family of Tina Tintor, the 23-year-old woman killed along with her dog in the crash involving ex-#Raiders WR Henry Ruggs: pic.twitter.com/FsRnjywr95

Ruggs has been dragged through the media and he’s received very little sympathy from people, and deservedly so. Once Ruggs sobered up from his drunken state that resulted in catastrophe and realized that he took a life and his life was changed forever, he was probably in a state of shock.

He appeared before a judge in Las Vegas Justice Court at 9 a.m. Wednesday in a wheelchair and neck brace. Judge Joe Bonaventure set his bail at $150,000, although the state had requested a $1 million bond.

Through all of the criticism and finger-pointing, however, Ruggs’ quarterback Derek Carr spoke on his behalf. He says he will support the disgraced NFL player on his road to redemption.

The social media comments under Carr’s tweet, posted by ESPN, weren’t as understanding.

Why should we be “loving” a guy that literally killed someone driving by over double the speed limit AND while over double the the legal BAC. If this was an accident, sure, but this is completely on him and he deserves absolutely NO love at all

According to reports, Tintor and her dog were trapped inside the vehicle as it burned furiusly. She and her dog were declared dead at the scene, but reports say Tintor put up a fight for her life before the flames engulfed her and her dog. Tintor’s friends, family and Vegas community are mourning her death.

Bojana Filipovic told reporters she and Tintor had been friends since childhood and Filipovic was one of the last people to see her alive. Monday night into Tuesday morning, Filipovic said the pair was out late taking Tintor’s dog Maxi for a walk, like they often do.

“We always go to parks and walk her dogs and just hang out and have a good time,” Filipovic said. “And just think about our future. We were just talking about going to Serbia together. She was just about to get her citizenship and everything was going swell.”

According to FOX 5 News in Las Vegas, a driving force behind their friendship was a shared Serbian heritage. “It’s something that Filipovic said bonded them immediately and turned into a friendship going on 20 years.”

One of the reasons why people are so adamant about not showing sympathy to Ruggs is because not enough light has been shed on Tintor’s life. When athletes and celebrities are involved in crimes perpetrated against “normal” people, the focus of the attention, sympathy and concern usually lies with the celebrity. As if their life is worth any more than someone else’s in God’s eyes.

“Our small Serbian community here in Las Vegas has lost young member and we are all extremely saddened by this terrible accident. I didn’t know Tina Tintor personally, but did see her at our church, always polite and respectful, just like rest of her relatives and friends. We understand that this is very difficult time for her family and whole community, we want to respect that and at this time we cannot share more information. Our deepest condolences to her family. May God rest her beautiful soul in peace!”

The racial component is undeniable as well. Ruggs is a rich Black athlete who basically reinforced every stereotype some people have about athletes of color. Taking a life is bad enough. The fact that he took the life of a white woman adds another, damning dynamic to his future circumstances. With that being said, Ruggs will have to answer to the laws of the land for his crime.

Ruggs will get a chance to hug his family again and maybe even hear the roar of the crowd. All Tintor’s family has is memories. So any way you shape it, he got the better end of this tragic ordeal.