When it was first announced that director Ava DuVernay and writer Spencer Averick would be crafting a documentary on the pseudo-ambiguous nature of the 13th Amendment to the Constitution of the United States of America, I already knew it would be an incredible artistic and educational undertaking.

Simply based off of her prior works, I knew Ava would put her proverbial foot all up the a*s of white supremacy as national policy.

I purposefully didn’t go see 13TH at the New York Film Festival, a stone’s throw from my humble dwelling, because I didn’t want to be affected by the hype and fandom. As the months prior to the October 7th release date on Netflix disintegrated into weeks, then days, I put off sitting down to watch it.

Sometimes as journalists we come across stories that strike so close to the core of our existence that it it causes us to take a step back. Right from the bat, I knew this would hit painfully close to home.

Growing up in the ’80s and ’90s, I witnessed many of my family members, friends and schoolmates devoured by a system the mainstream says is “equal”, but you eventually learn it is designed for your demise. Though the mainstream screamed that these black men were inherently evil, as well as seeing older black folks agree with that assessment, these were just facts to me, facts that I did not need a crafted documentary, a Hotep Youtube producer, or hipster professor to school me on.

So, initially, I was suspect about what this documentary had to offer me or anyone who came up in similar circumstances and learned of them first hand.

The documentary takes its name from the 13th Amendment to the Constitution which declares, “Neither slavery nor involuntary servitude, except as a punishment for crime whereof the party shall have been duly convicted, shall exist within the United States, or any place subject to their jurisdiction.”

Formally abolishing slavery in the United States, the 13th Amendment was passed by Congress on January 31, 1865, and ratified by the states on December 6, 1865.

The testimony contained in the documentary, as well as the facts discussed, are something that many in my generation were schooled to at the tender ages of 12 and 13 years old. The lessons came from sources that were frowned upon by academics in the late ’80s, and today; conscious rap songs, community center Q&A sessions with former black activists, at the Million Man March in 1995, and in articles published in The Final Call.

But today, as former presidential advisers and voracious right wing pundits concede to the damaging effects the 13th Amendment has caused to the Black community in America, Ava’s 13th reintroduces this information in a masterfully compiled and edited documentary that reveals one of America’s greatest sins as being everything but ambiguous.

With the term “except as punishment for crime”, the 13th Amendment provides a loophole for slavery and appears to have been intended to subjugate large populations of newly freed black males following the post-Civil War Reconstruction Era and well into the modern times.

Because of this loophole, millions (perhaps tens of millions) or people of African descent, along with individuals of Latino and Native American ethnic groups, were hoarded into a lifetime of servitude at the very dawn of what was supposed to be the abolition of slavery in the United States.

Like a virulent viral strain that transforms itself against would-be societal inoculation, slavery was replaced by Jim Crow. But in the approximately 100-year span between the supposed end of forced servitude in America and the Civil Rights Movement of the 1960’s, and the 40 or so years since the Civil Rights Movement ebbed, the prison industrial complex has grown into a ravenous, drooling automaton.

It stalks history like a terminator designed with the purpose of smothering black citizenship, with the “favorable” side effect of rendering the Black community politically, economically and socially impudent.

While the actual purpose was to create a cheap labor force to help rebuild a crippled southern economy that desperately needed cheap labor, the effects were much more lasting and sinister.

In each American generation, this beast has manifested itself in different ways, its DNA rendered from a persistent media campaign designed to demonize black males, emboldened by an ignorant and fearful mainstream population, and allowed by a corrupt federal apparatus.

Providing valuable insight and context for the documentary are Dr. Henry Louis Gates, noted author and expert on the prison industrial complex Michelle Alexander, professor and activist Angela Davis, Professor John Hagan, author Jelani Cobb, noted journalist Marie Gottschalk, Van Jones and a multitude of others who bring their considerable experience in the classroom, in the courtroom, and on the front lines of activism to bear in this admittedly enlightening offering.

Almost two decades ago, I was taught by various editors and publishers that black folks only came online to be entertained, and that issues like grandfathered racism were best left to other (white) outlets. However, since the killing of Trayvon Martin in 2012, we have seen an explosion of such articles and sites that deal solely in such content that are flourishing. (I’ve personally written at least 50 such pieces in the last four years).

Though the landscape of the American consciousness has changed considerably in four years, I cannot help but wonder where these conscientious and progressive-minded individuals were when Hillary Clinton was running around coining phrases like “super predator”, or when Bill Clinton got the 1994 Crime Bill passed, both of which are mentioned in Ava’s flowing, rhythmic piece. 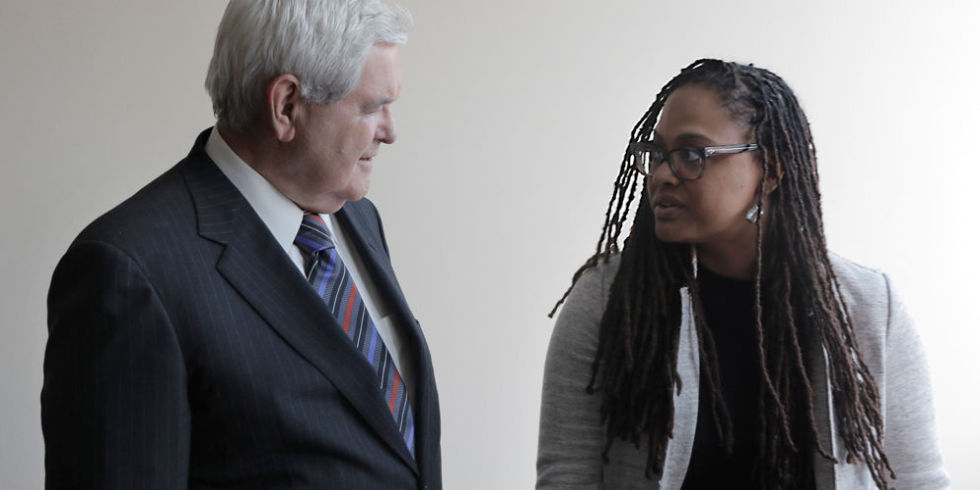 Also, I found it both factually correct and somewhat satisfying to hear several commentators mention that Black people asked for many of the draconian quality-of-life laws like Stop and Frisk and 3 Strikes to be implemented in their neighborhoods during a time when crack cocaine abuse and distribution were at record low levels. This fact has since been reinvented in recent years.

An interview of note is with former House Speaker Newt Gingrich (R), a man who was considered an enemy to much of Black America throughout his public life, speak openly and frankly about the matter.

But the documentary doesn’t stop with history and laws, it also explains how corporate think-tanks are helping conservative laws be passed for financial gain, something that very few offerings have provided detailed insight on.

As a documentary, an educational piece, and a compiled piece of art and activism, Ava DuVernay’s 13TH is both timely and timeless.