First debuting in Tales to Astonish #32 (January 1962), Ant-Man, as illustrated and written within the Marvel Comic Universe, has been a man full of pain and suffrage when portrayed by brilliant scientist Henry Hank Pym.

In the film rendition, Hank Pym is retired and his company has been seized by board members led by his daughter Hope van Dyne and former protg Darren Cross.

One of the mental pins that I made early on while viewing the Marvel cinematic arc is just how Michael Douglas would translate the sad, scared little man that was Henry Pym on to the big screen. Im not saying that to simply diss Pym, but he is a tragic figure.

To me, the absence of Ant-Man and the Wasp from the very first Avengers film was almost unforgivable, the MCU interpretation of our would-be robotic dictator Ultron as having been created by Tony Stark rather than Henry Pym as blasphemous to the comic book material. So I admittedly had some very low hopes for this film. But, oh ye of little faith, how could I have possibly doubted the studio that successfully gave us a walking tree, a talking raccoon and a dancing fool as superheroes?

From the very beginning it was obvious that writers Edgar Wright, Joe Cornish, Adam McKay and Paul Rudd wanted this film to be a really smooth origin story. Not only for the sake of introducing Dr. Pym, Scott Lang and the entire Ant-Man crew, but also to seamlessly tie this thread into the overall Avengers/Guardians of the Galaxy Marvel lexicon. Ant-Man accomplished every task viewers would expect for it to, and then some. Though most of the rest of Marvel film universe (as interpreted by Disney) have an air of delightful dread throughout each film as the world, and galaxy, hangs in the balance, Ant-Man deals with the heavy material much in the same way as Guardians of the Galaxy, by injecting massive amounts of irreverent, immature humor wherever they possibly could.

After seeing aliens and green smashing machines up close and personal, it was hard to fathom just how cool they could make ants. Lets be honest here, ants stopped being cool in the 7th grade to most of us. But ant lovers and ant-neutrals alike will appreciate just how “ant-tastic” (See what I did there?) the little guys are made to be by the army of visual and special effects technicians that help bring this movie to life.

There was much sighing and gasping when Paul Rudd was named as the star of Ant-Man but now that Ive seen it there can be no other Ant-Man in the history of Ant-Man from here to Ant-Man eternity.

Unlike the other Marvel blockbusters, Ant-Man is very human. Paul Rudd plays Scott Lang, an ex-convict who accidentally steals the Ant-Man suit after being convinced by his roommate that something of value is to be had at a mysterious Victorian residence. He only agrees to it to pay down his child support enough so that his ex-wife will allow him to see his daughter.

But, as it turns out, Pym is manipulating him the entire time.

A loveable, altruistic guy, Rudds Lang is a bit of a screw up, and so is his criminal-minded but amiable ex-con roommates played by Tip T.I. Harris, David Dastmalchian and Johnathan Pena, who plays Luis.

Though it was impossible to foresee, Luis penchant for telling long, winding and disjointed stories is essential to the transfers of information between characters in the film. Look out for it. Very funny stuff. T.I.s character Dave is the de facto brains of the group simply because theyre all so broke and desperate.

As much as we like comic book heroes, theyre just weirdos running around in their under-draws without a really good villain. Often the case wherever super-secret scientists are concerned, Pyms former protg Darren Cross has been working on something of grave importance to the future of Pym Tech for years and the revelation of a breakthrough forces Pym out of retirement. He never imagined Cross and his daughter would be clever enough to crack the formula for the Pym Particles. But it would seem that this Pym has a really bad problem with overestimating his own abilities and underestimating everyone else by proxy. Just like the comic book Pym.

Also, this Pym has beef with anyone named Starks, just like the comic book. 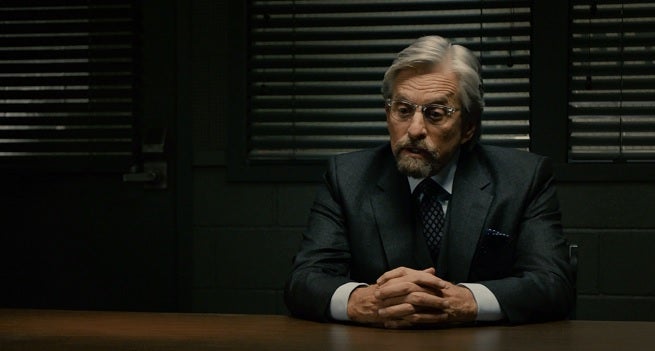 Cross has created a shrinking suits affixed with lasers and plans on selling them to the highest bidder, which is usually Hydra in the Marvel Cinematic Universe.

Michael Douglas captures the volatile and conflicted essence of Henry Pym perfectly. Throughout the film his genius is only matched by his tempestuousness. Also, Douglas portrayal of Pym is characterized by loads of angst and regret, just like the comic book Pym. However, comic book Pyms regrets largely center on Ultron but cinematic Pyms pain is tied to the death of his wife who died alongside him on a mission. She is revealed to be the first Wasp and shown fighting alongside Pym in the film in a flashback.

Though he has guarded the secrets of his Pym Particles for years, Cross and van Dyne came to the very same scientific observations and conclusions as Pym decades earlier in order to replicate the shrinking process. That in and of itself isnt very scientific at all. But the fact that it is a comic book movie so things that arent supposed to happen are happening all the time. So, I got over that really quick. Also, (quasi spoiler alert) the moment that Evangeline Lillys in character haircut was shown on screen I knew she would (eventually) be the Wasp.

I saw that before it was revealed who her father is.

Cross, as portrayed by Corey Stoll (The Strain), is an absolute obsessive-compulsive nutcase who is murderous, self-absorbed and jealousy-ridden. It is alluded that he was a good man at one time but may have suffered a sort of psychosis resulting from being exposed to Pym Particles. Pym warns of how shrinking can take a toll on the wearer of the Ant-Man suit.

Though a happy ending was to be had by all, comic book fans know that the Ant-Man is something of a tragic figure.  It would not be a leap to speculate how some of that tragedy might manifest on the big screen as well. But well make an awkward segue to those great mid-credit extra scenes weve become so accustomed to seeing. Unlike other films, Ant-Man offers up two of them.

Also, bravo to the writers for weaving such details as Pyms relationship with Howard Starks and Peggy Carter, and the filling in the gaps of superhero-dom between the disappearance of Captain America at the end of the first film and the emergence of Iron Man decades later. It also leaves the door open to some really cool retro-style superhero flashbacks as well.

Funny, redemptive, and heart-felt, Ant-Man is the most human of the Marvel Studios film offerings.  The Shadow League gives Ant-Man a solid A.