Postpone Carolina’s trip to the NFL morgue. The Panthers have a pulse.

Its a faint one, but they are alive and kicking no less. After putting the clamps on the Washington Redskins, another NFC squad with fleeting hopes of securing that final Wild Card slot, the Panthers are 6-8 and and a #11 seed in a chase that includes the Buccaneers (8-6), Redskins (7-6-1), Vikings (7-7) and the Saints, who are also 6-8.

The 10-4 NY Giants have the first Wild Card spot on lock, but everyone else is trying to catch 8-6 Green Bay. Even if Carolina wins its final two games against the 9-5 Falcons and dangerous Tampa Bay, some funky tie-breaker scenarios need to break right for Carolina to leap over five teams like O.J. in the airport back in those old school Hertz Rent-A-Car commercials.

However, after all of the abuse Cam Newton has taken on the field and in the media this season and as pitiful as the defending NFC Conference champions have looked at times, they still have a puncher’s chance of defending their title with two games left in a season that seemed lost in the sauce.

Newton is playing his best ball and Carolinas 26-15 win over Washington on Monday night keeps their ambitious playoff dreams alive.

When you have a pistol-packing, ball of thunder at QB with a winners pedigree and a playoff posture, then anything can happen. And when that weapon is functioning on all cylinders, the Panthers are a different team. Cam has had a roller coaster season. His team hasnt performed for him, the defense has been suspect, refs arent protecting him as evidenced by another helmet-to-helmet hit he unjustifiably suffered compliments of Trent Murphy on Monday night. 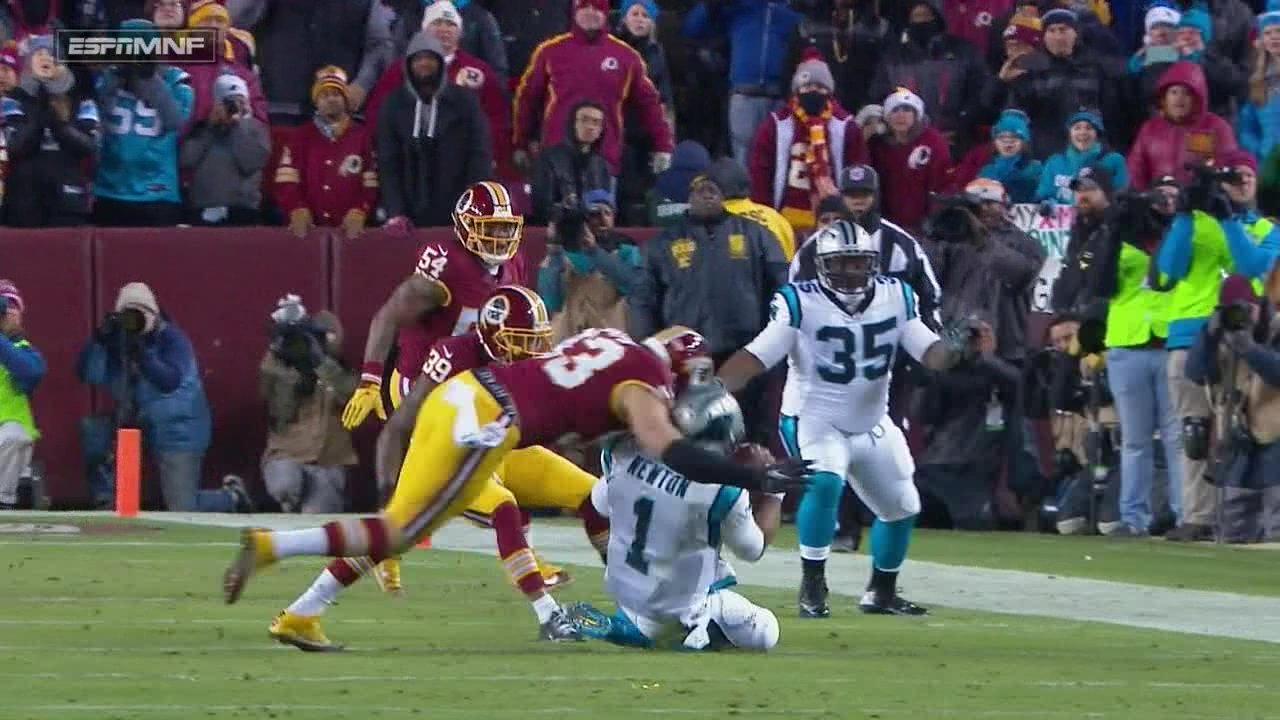 Ive gotta be better than that, he told reporters in his post game press conference. That just cant happen on my part. I just have to let the referees do their job. I thought it was a questionable hit, but yeah, I cant throw the ball at a player. I know thats against the rules.

Instead of complaining, he let his golden game glisten. He was the magical maestro that we have all come to respect. Cam produced his third 300-yard passing game of the season, his first since October 16th against the Saints.

He talked junk as he always does, but his focus was laser sharp. He didnt seem to be playing with any distractions for the first time in a long time. The smile was genuine last night and not a mask for an insecurity, anger, frailty or fear that he might harbor.

The Panthers won the division with a 7-8 record in 2014 and are notoriously strong finishers, so they have been in these must-win then pray for the ball to bounce in your favor situations before.

You saw it in the way Carolina’s 22nd-ranked defense showed up against Kirk Cousins and Family, forcing several turnovers. Cam did the rest. Its a familiar recipe, but one that hasnt been delivered often enough or with the right mix of ingredients during this 2016 campaign.

One thing Cam doesnt do is panic and with an outside shot to still make the playoffs, he wont start freaking out now. In fact, hes reaching peak performance at the perfect time. Last year’s MVP has everybody right where he wants them: sleeping on a giant.