Americas heavyweight champion, Deontay The Bronze Bomber Wilder returns to action this Saturday. He faces Gerald Washington, a NAVY veteran and former NFL football player. The fight comes at a time when the heavyweight division is on fire with the British Invasion of Anthony Joshua and rabble rousing Tyson Fury. 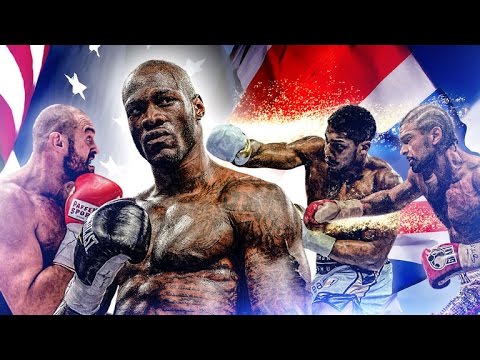 It is always difficult to make certain fights happen in boxing, but recently for Wilder it has been almost impossible. Set to make his fourth title defense against Russian standout Alexander Povetkin on May 21st 2016 in Russia, Wilder was floored to find out Povetkin tested positive for a banned substance a week before the fight. The substance, meldonium, is the same that tennis star Maria Sharapova is currently suspended from tennis for two years for.

On February 14th, Wilder won a $7 million dollar settlement in New York Federal Court over the cancellation of the bout.

Wilder made the fourth defense of his WBC heavyweight title against former two-time world heavyweight title challenger Chris Arreola mid-July 2016. Wilder dominated the entire fight with a thrilling execution of his sharp jab, with Arreolas corner stopping the bout in eight rounds. However, it was Wilder who caught the rough end of the victory with a broken right hand and torn biceps.

After two surgeries, Wilder sat out the rest of 2016 then was scheduled to face 29-year-old two-time Polish heavyweight champion and former world title challenger, Andrzej Wawrzyk. However in late January it was discovered that Wawrzyk failed a drug test and he was ruled out as an opponent. Luis Ortiz and even Tyson Fury were in the conversation as replacements but ultimately Gerald Washington (18-0-1) got the shot.

Relatively unknown, Washington is currently ranked 10th and had wins over former world heavyweight title challengers Eddie Chambers and Ray Austin. The Bay Area native is not to be slept on as he is a former defensive end for USC and was a member of the Seattle Seahawks and Buffalo Bills practice squads. The NAVY veteran became a professional boxer at age 30, relatively old in the boxing world, but is currently on a 12-fight win streak.

Now 34, the undefeated challenger looks to make the biggest splash of his athletic career, taking on the younger champion in his his hometown. Having already surpassed his nickname-sake, former Alabama heavyweight champion, Joe The Brown Bomber Louis in consecutive championship wins, it is no doubt that Wilder will be game ready for Washington.

Catch all the championship action live from Legacy Arena in Birmingham, Alabama on FOX at 8pm EST / 5pm PST.