Before the NCAA discovered Johnny Manziel was about to ruin his throwing shoulder signing thousands of autographs a day for four and five-figure sums, Texas A&M’s redshirt sophomore quarterback was a magnet for smaller controversies.

However, the season started snowballing for Manziel after his expo of insolence in the presence Professional Football’s Corleone Family. His crime? He committed the sacrilegious act of suddenly leaving the Manning Passing Academy a day early. At least that’s the official story. 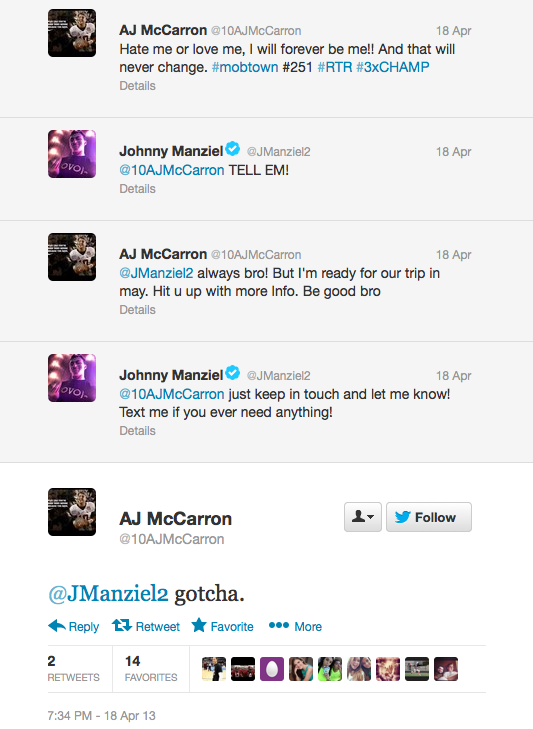 That weekend also highlighted a shift in the relationship between Manziel and Alabama quarterback A.J. McCarron. Unbeknownst to much of the rabid SEC-nation, they became friends sometime after the season. Most likely, it was sophomore Manziel that reached out to the super-senior McCarron.

McCarron ran the quarterback sneak on Manziel and didn’t rebuff the young Manziel’s attempts to forge a friendship. Instead he channeled his Sun-tzu. “Keep your friends close and your enemies closer.”

They even scheduled a trip together for early summer.

Perhaps, Manziel tried to steal his girl or McCarron started listening to his own Heisman-hype. Maybe Nick Saban found out about their throwmance bromance and ordered that he end it, but as summer practices approached McCarron went from friend to foe on the Heisman Trophy winner.

Why? I mean, people askin questions.

Alabama’s disgruntled quarterback even went as far as to throw subliminal Twitter jabs at Manziel’s acned face during the ESPYs. Perhaps it was the culmination of a summer spent hunkered down in Tuscaloosa while his girlfriend Katherine Webb became a bigger celebrity than him and Manziel’s popularity soared while he gallivanted around the country, hobnobbing with celebrities.

You're right I'm not at the espy's! I don't have to be at a award show to know what my team did. I'm back at school working to get another

The tension brewing underneath the surface finally boiled over at the Manning Passing Academy where McCarron and Manziel were crammed into a Nicholls State dorm together. On the final day of the camp, Manziel left after oversleeping and missing an early morning session.

He’d had infinite opportunities over the summer on gathering Intel. The burning question is how did he do it? Let’s just analyze the evidence we do have. There’s existing visual evidence that McCarron was also blowing off steam with Manziel and the Mannings sometime that week at the Manning Camp.

That’s where the earlier trip comes back into play. Follow me down this rabbit hole. Don’t taste the mushrooms. During the aforementioned offseason trip that McCarron seemed eager to go on, he was able to ascertain what brand of tequila Manziel orders from the bar. McCarron could have put Manziel in some compromising positions and sold the photos to TMZ, but, unfortunately, Uncle Nate likely shadowed Johnny Football.

The Manning Passing Academy was the first chance McCarron had to kick it with him alone. Manziel has been adamant about not drinking that night. Only narcoleptics sleep so hard that you can’t wake them without a few nudges. However, a few crushed sleeping pills plus diphenhydramine would have him knocked out like Pacquiao. Is this not the only scenario that makes credible sense.

Over Labor Day weekend, an epiphany hit me while watching Nick Cannon’s acting highlight, Drumline, in my peripherals. Basically, my revelation was that Devon Miles is the fictional HBCU version of Manziel. Both have a bit of an enlarged ego, accentuated by natural improvisation abilities—one on the sticks, the other with a football — Dr. Lee is Kevin Sumlin and McCarron is the equivalent to Miles’ more mature, but less-talented and envious percussion leader.

In relation to McCarron leaving Manziel asleep that morning, I’m reminded of a Drumline scene in which Miles’ roommate arrives late to a pre-dawn practice. Dr. Lee directs his attention towards Miles and asks why he didn’t wake him, Miles responded that he wasn’t his roommate’s mother. Amidst the snickers, Dr. Lee smugly bellowed that in his band, they were all each other’s mothers. It was a lesson on team unity.

Manziel grasps that ethos. Last summer, Manziel’s refusal to leave a man behind copped him a misdemeanor charge. As a leader of the two-time defending national champions, there’s no doubt that Nick Saban drilled a similar mantra into McCarron’s skull.

If Manziel were McCarron’s roommate and close friend, you’d presume he’d make every effort he could to wake him. Leaving him there like a pig for media slaughter knowing that every breath Johnny TMZ takes becomes a topic of media fodder was cold-blooded.

So why would Manziel just pack it in? It’s not like he barfed all over Peyton’s $10,000 Persian rug. Don’t put it past McCarron to have deceived Archie into booting Manziel. He shoot a text of Money Manziel passed out on his bed with a phallis drawn on his cheek? Manziel probably had no choice but to oblige the early-boot, not wanting papa Manning to make scathing critiques of Johnny Football to his friends in NFL front offices.

When asked to explain what happened on that fateful morning by reporters during SEC Media Day, McCarron bobbed and weaved like a Golden Glove pugilist while slipping in a shot of his own.

“I can't answer on Johnny Manziel's part; he's his own man. I'm not going to speak on another man's business,” McCarron said to set up his zinger. “That's how I was raised. I know how to handle myself in public, and that's what I worry about."

That’s about as guilty as you can sound outside of a court of law without requesting your attorney.

Shots below the belt about dude’s home-training? And you thought Mayweather-Alvarez was going to feature a slew of body shots. Can the SEC get Mills Lane out of retirement to officiate Alabama and Texas A&M? We may never know for sure if Manziel was a victim of McCarron’s scheming. Either way, Saturday’s undercard is going to be about as personal as ever ever for the respective starting quarterbacks.