People forget how good Michael Bishop was, except for those who saw him play.

In 1997, Michael Bishop led Kansas State to their best regular season since 1910. For those from the state of Texas, his first-year success in major college football was no surprise. The Houston native came to the Wildcats after two years at Blinn Junior College, the same school that Cam Newton later attended prior to his Heisman Trophy-winning and national championship campaign at Auburn in 2010.

But if you ask folks who the best quarterback in the history of Blinn was, the answer is unequivocally Bishop, who led the Bucs to a record of 24-0 and two consecutive junior college national championships.

Like Newton, Michael Bishop never lacked confidence. When he stepped foot on Kansas States Manhattan campus, the media asked him who he would compare himself to. His answer: John Elway and former Nebraska great and All-American Tommie Frazier.

Outside of the fact that he could throw a football 93 yards, was known to have broken a teammate’s finger with the extreme velocity of his throw and that once loose in the open field, he maintained the burst and elusiveness of an elite tailback, his best quality was a competitiveness that could not be taught.

He hates to lose, Wildcats coach Bill Snyder told Sports Illustrated during Bishops first year at Kansas State, where he led them to a 10-1 regular season and a berth in the Fiesta Bowl. And it shows in the way he plays.

That quality didn’t always play out with political correctness. After their 56-26 loss to Nebraska that year, Bishop was forceful in his assertion that some of his teammates quit during the game. It was his first loss in three years, since he played at Willis High School in the Houston suburbs.

I was honest and that was how I felt, said Bishop. Losing was something that I could never get accustomed to. Once we got down by 20 points, I could see in the way that some guys responded. As the quarterback, I was the leader of the team and was going to speak my mind. I never quit, I don’t care how bad things get. And I was letting my guys know that quitting was unacceptable to me. That’s not who I am as a person.

His head coach barred him from speaking to the media for a month after that, but Bishop was not there to win a public relations war. He was there to play football in a way that Kansas State fans had never seen before.

And the coaches who had to face him knew what they were up against.

Colorados coach at the time, Rick Neuheisal, told Sports Illustrated that he was, a great running back playing quarterback. He makes amazing plays with his arm, but you really get concerned when he pulls the ball down and runs. 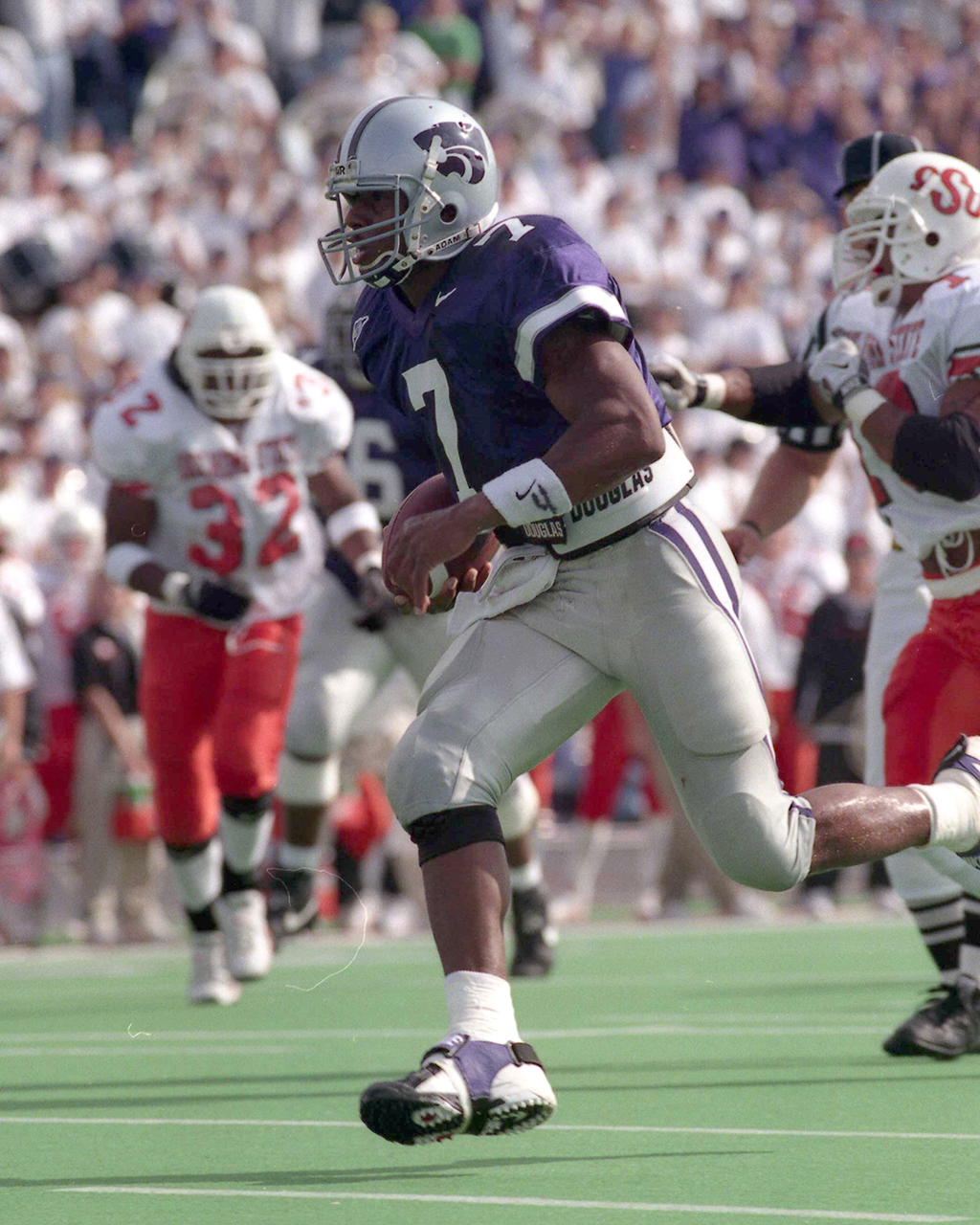 The Wildcats claimed a place among the nations elite programs in 1997 with their resounding 38-18 defeat of Syracuse in the Fiesta Bowl, who boasted a pretty dynamic quarterback of their own at the time named Donovan McNabb. The comparison between the duel-threat signal callers that day was no real comparison at all, as Bishop threw for 317 yards and four touchdowns. He also rushed for 73 yards as well.

To appreciate Michael Bishops greatness, you have to understand that prior to his arrival, Kansas State was moribund. Head coach Bill Snyder began to build the program with a foundation of discipline and attention to details. The quarterback was merely a game manager in Snyder’s offense whose main job was to play a bland, mistake free brand of football.

And then Bishop showed up on campus after stiff-arming scholarship offers from Baylor, Texas and Texas A&M, among others. Some schools promised to give him a shot at the quarterback position, but they also suggested perhaps a switch to wide receiver or defensive back.

Snyder made no such foolhardy suggestions. He made it clear that he wanted Bishop as his signal caller, and that if he was good enough, he’d start from day one.

Seeing Michael Bishop work his magic at Kansas State in an offense that had previously been as clean- cut and conservative as IBM was almost like Fetty Wap being named the CEO of Goldman Sachs. It was incongruous to all we thought we knew about what K-State football was.

Bishop proved to be the building block, the key element that took the Wildcats off the fringe and into the national spotlight. And he did it with a swagger and skill set that captivated the nation.

After their improbable 11-1 campaign in 97, Kansas State was considered a national title contender in 1998. They were undefeated 10 games into the season and attained the country’s #1 ranking in the ESPN-USA Today Coaches Poll.

It was a remarkable rise for a program that had once been one of college football’s dregs. And it was Bishops inundation of luminosity and brilliance that buried the programs dreadful past with the swiftness of a Serena Williams serve.

No victory during the 98 season was more meaningful than their historic 40-30 win over Nebraska on November 14th. Kansas State had not defeated the Cornhuskers since Otis Redding was Sitting on the Dock of the Bay 30 years earlier back in 1968.

The anticipation of the game prompted the appearance of T-shirts on campus that read, Judgment Day For The Children of the Corn, a month prior.

Bishops scrambling, 11-yard touchdown pass to Darnell McDonald with a little more than five minutes left in the game gave Kansas State a 34-30 lead, an advantage that they wouldn’t relinquish. The score capped off an astonishing performance for Bishop, who ran for 140 yards and two touchdowns and threw for 306 yards and two more scores.

Joe Drape of the New York Times wrote, He turned one quarterback draw into an elegant 50-yard run up the middle, making Nebraska players miss him with the slightest turn of the hips, as if he were a marble rocketing down a shoot.

After the game, Snyder made his case that Bishop deserved the Heisman Trophy. We live with Michaels mistakes because if were not careful, we could temper a great talent, said Snyder. Michael is a great all-around football player. That’s what that trophy is supposed to be for, isn’t it?

Bishop wound up finishing second to Texas incredible running back  Ricky Williams in the Heisman trophy voting that year.

Ricky told me that he thought I deserved to win it, said Bishop.

He led them to an undefeated regular season and a Big 12 North title, but their national championship hopes were dashed in the Big 12 Championship game, where they lost 36-33, in double overtime, to No. 10 Texas A&M. He passed for 2,844 yards and 23 touchdowns that year, against only four interceptions. He also ran for an additional 748 yards and 14 more TDs.

Bishop won the Davey O’Brien Award as the nations best quarterback at seasons end, in addition to being named a consensus All-American and the Big 12 Offensive Player of the Year.

If you’re ever at Bill Snyder Family Stadium in Manhattan, Kansas, look up at the schools Ring of Honor. You’ll see Michael Bishops name there, alongside other greats like Darren Sproles and Jordy Nelson.

When it was announced that Sproles would be inducted alongside Bishop this fall, one of the NFL’s all-time most electrifying all-purpose threats said, It means a lot to me to be up with all the greats. I grew up watching Michael Bishop play. To go in with him is big.

Bishop started 25 games in his two years in The Little Apple and led the program to an outstanding 22-3 record during his tenure. He broke the school record with 36 career touchdown passes, and set the record with 59 combined touchdowns, both rushing and passing, which is amazing, considering that he only played two seasons.

This summer, it was announced that he is now a nominee for the College Football Hall of Fame.