During this year’s Final Four weekend in Phoenix, Arizona, we went behind the scenes once again for a few conversations with some big names who made an impact within the college basketball tapestry during their NCAA careers. In this next installment, we bring you Sean Higgins, the 6-foot-9 shooting guard/small forward from the University of Michigan who helped deliver the Wolverines’ first national championship in 1989. Higgins was always a matchup nightmare whenever the ball was in his hands. Ahead of his time as a fluid player with length, he had what is known as “in the gym” range. Basically, he could shoot the ball with accuracy from anywhere.

A prep standout at Los Angeles’ Fairfax High School, where he teamed with future college and NBA player Chris Mills, forming a duo that many believed was the best in the country, Higgins was a prestigious McDonald’s All-American. He is still considered one of the best high school players to ever ball out on the west coast and averaged 22.8 points, 8 rebounds, 4.2 assists and 3 blocked shots per game as a senior at Fairfax while playing guard, forward and center.

He played a flashy game that lifted people out of their seats. Folks dared not take their eyes off of him due to his ability to knock down the deep ball, which coupled with his slithery moves off the dribble to make him a certifiably unstoppable weapon. No matter where he was on the court and who was guarding him, Higgins had the confidence to believe that he was always open.

But he wasn’t just a shooter. Surrounded by a talented cast at Michigan that included the inimitable Glen Rice, Rumeal Robinson, Loy Vaught and Terry Mills, all of whom averaged double-figures for that ’89 crew, Higgins, despite his reputation as strictly a scorer, was well-versed in giving up the rock on the break and sharply distributing the ball to an open teammate when he double-teamed.

Back in ’89, Michigan finished the regular season with a 24-7 record and a 12-6 mark in the Big Ten conference. Drama surrounded the team prior to the tournament tipping off when the school’s legendary athletic directer Bo Schembechler abruptly fired head coach Bill Frieder, who’d announced that he’d be leaving the next year to take the Arizona State job, and replaced him with an unknown assistant named Steve Fisher.

It seemed that the team, then ranked #10 in the country, was doomed heading into March Madness. But Fisher, Higgins and the rest of the Wolverines had other plans.

Rice went on a scoring binge that the NCAA Tournament has not seen, before or since, averaged 30.7 postseason points while scoring 184 points in six games. Robinson set the two-game Final Four assist record with 23. In the Final Four against a stacked Illinois squad that had smacked them twice in the regular season and featured some supreme college ballers in Kenny Battle, Nick Anderson, Kendall Gill and Stephen Bardo, Higgins scored 14 points, including an iconic bucket that has since gone down in Michigan lore.

Their opponent in the national championship was another surprising squad in Seton Hall. Despite Danny Ferry’s 34 points and 10 rebounds, the Pirates smashed Duke, 95-78, behind the exceptional play of Andrew Gaze, Gerald Greene, Ramon Ramos, Darryl Walker and John Morton.

In one of the most thrilling NCAA title games, Higgins scored 10 points and grabbed nine rebounds, Rumeal Robinson scored 21 points and dished out 11 assists and Glen Rice scored 31 points and snagged 11 rebounds.

With three seconds left in the first overtime national championship game in 26 years, Robinson, with Michigan trailing 78-79, tied the score against Seton Hall after taking and making the first of his two free throws. He proceeded to made the second, giving the Wolverines an 80-79 overtime victory in front of 39,187 at the old Seattle Kingdome for the school’s first and only NCAA basketball title. 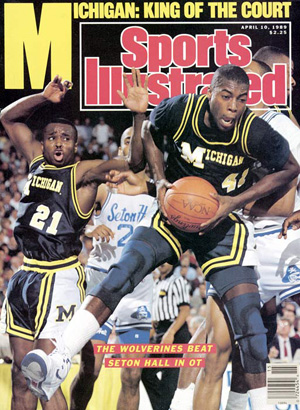 The Fab Five gets all the props, but they never cut down the nets. The ’89 squad did. And if you want to know what that was like, ask Sean Higgins about that team, that journey, that moment.

There’s no need to wait for an answer. The smile on his face, even all these years later, says it all.