In more tragic news, due to growing concerns related to COVID-19, the Board of Directors for the Central Intercollegiate Athletic Association (CIAA) has voted to cancel the upcoming men’s and women’s basketball seasons, which was set to begin January 9, to include the 2021 CIAA Basketball Tournament.

The best collegiate basketball conference tournament on the planet is yet canceled. https://t.co/wz8fMLwl9U

No CIAA tournament means that the festive cultural gathering that transpires during tourney weekend and the economic boost that the host city receives won’t be happening either.

After 15 years in Charlotte, the CIAA tournament was officially relocated to Baltimore in 2021. Last year’s tournament was the final dance for host Charlotte as well as the 75th Golden Anniversary of the tournament.

The return to Baltimore, the tournaments first since 1952 and its first away from Charlotte since 2005, was supposed to be epic. 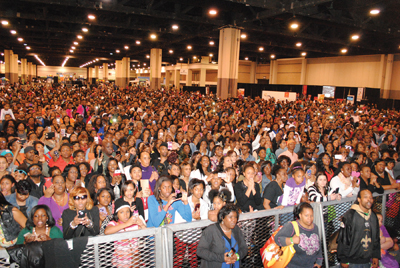 The Central Intercollegiate Athletic Association – the country’s first African-American sports conference  – and its unique basketball championship has grown into a multi-faceted celebration of sports, Black culture and business with its varied events designed to connect people.

Mood: When you open up the CIAA Tournament with the W! pic.twitter.com/8wrGVFvvII

With no tournament going on, the host city will be absent of the soul infusion, excitement and movie that is the CIAA Tournament.

In addition, the board also voted to cancel the women’s volleyball season, which had been moved to the spring from the fall.

“Unfortunately, COVID-19 continues to challenge the conference’s ability to see a clear path to move forward collectively. The impact to health and wellness, community concerns, as well as the economic ramifications are real,” said CIAA Commissioner Jacqie McWilliams. “I want to commend our Board of Directors for exemplifying courageous leadership in college sports to ensure the well-being of the CIAA as well as the health and safety of our student-athletes and communities.”

“This was not an easy decision or one that was taken lightly by the CIAA Board,” said Virginia State University President and CIAA Board Chair Dr. Makola Abdullah. “We all want to have a season, and we want our student-athletes, coaches and staff to have a season. However, the data, which changes almost daily, does not support such a decision. The potential risk outweighs the desire to play.”

In lieu of games being canceled and no in-person events, the CIAA still plans to engage alumni, students, and fans during what is traditionally tournament week, in the last week of February, through a virtual experience.

The platform will feature a host of ancillary events – including several that have become cornerstones of tournament week such as CIAA Fan Fest and the CIAA Step Show. More details, including a full schedule of events, interactive fan promotions, and other activations, will be released at a later time.

A decision on spring seasons and championships will be provided later as the conference and its membership continues to monitor the COVID-19 landscape while following current federal, state, local, NCAA, and campus guidelines.