“C’Mon Son!!!” is a semi-regular column on The Shadow League where we lovingly tap some fool on the shoulder in order to help them through some personal growth. Today’s moron is NFL Hall of Fame wide receiver Jerry Rice, whose most recent personal foul has crossed the line.

Have you seen Jerry Rice in the latest commercial for Popeye’s Chicken?

And talk about perfect timing, with Black History Month right around the corner! It’s obvious that Jerry has no inner compass or sense when it comes to the greater African-American struggle and the importance of positive imagery. And he has no problem, obviously, with putting on his dance shoes to do his best Sambo routine for Popeye’s.

I used to have the ultimate respect for Jerry Rice, the football player, and legend he created on the field with his insane work ethic and commitment to athletic excellence. The accolades and accomplishments are too numerous to cite here, but just know that the man is widely considered to be the greatest wide receiver in history, and perhaps greatest individual NFL player of all time

No receiver ever accumulated more catches, touchdown receptions, and receiving yards. He was an All-Pro in 12 of his 20 professional seasons and earned three Super Bowl rings with the San Francisco 49ers.

And recently, he has also earned my disdain for being a mental midget away from the bright lights of NFL stardom and championship heroics.

Remember the storm he created in late August with his response to Colin Kaepernick taking a knee during the playing of the pre-game National Anthem to protest oppression, societal disparities and police brutality that disproportionately harms, maims and kills African-Americans?

Rice tweeted out some nonsense along the lines of, “All lives matter. So much going on in this world today.Can we all just get along!”, and telling the 49’ers QB that he needs to respect the flag.

After initially criticizing the manner in which Kaepernick protested racial injustice, Rice, after a social media flogging that clowned him as a puppet and out of touch, washed-up former athlete with no capacity for understanding simple axioms of Black pain, took to Twitter to pull an about-face, applauding Kaepernicks message.

He jumped on the bandwagon after the Twitterverse clowned him, but forever stained himself in the eyes of many who struggle with America’s continuous abhorrent treatment of people of color. The stain of irrelevancy would remain as far as I was concerned.

But life moves on, and we had more pressing concerns to worry about than Jerry Rice’s incapacity for deep thought, research, reflection and societal intelligence.

Go ahead and talk about football, Jerry, that was the basic sentiment, and we figured that he’d learned his lesson of wading into waters that were too deep for his limited mind.

But now, he’s out here acting like Bobby Taylor trying to cash a check, minus the consciousness that ultimately rescues Bobby in the end.

I have no problem with Rice using his celebrity to sell products for the corporate machine. And I can’t front, I rock with a Popeye’s three-piece every now and then and have an irrational attraction to them ridiculously delicious biscuits. But there’s a way to go about it.

And Jerry pulled an act of community betrayal with the way he went about it. Instead of being dignified and speaking up about what he would and would not tolerate in terms of positive imagery, he was the first in line, elbowing others out of the way to enroll in the Popeye’s Black Acting School.

When the advertising and marketing gurus who came up with this campaign for Popeye’s laid out their vision, when Rice saw the storyboards, costumes, props and the way they intended to use his image, his hard-earned fame to perpetuate another long-entrenched stereotype of the dancing black man’s love of chicken, he should have pulled a Bartleby the Scrivener, and very calmly and professionally said, “I would prefer not to.”

He would have been well within his rights to go off like my favorite reporter, and code-switching back into “Juhree” from broken-down Crawford, Mississippi once he rehearsed the script, screaming in refusal once the stench of what he was being paid to do was fully understood.

But no-siree-boss, he smiled, shilled his chicken, and looked incredibly pleased with himself in doing so.

How did Jerry not know that this particular portrayal was problematic? How is he not aware of the perpetuation of harmful and racist stereotypes. Shoot, everyone knows that everybody loves some damn chicken. But you wouldn’t know that when bombarded with the advertising and marketing machine that moves people to spend loot and send products flying off of shelves.

The Ad game has long been dominated by racist caricatures that were anything but understated and subtle. Ask some uncultured folks who their favorite Black folks were growing up, and they’ll mention Aunt Jemima, Uncle Ben and the dude on the Cream of Wheat box sporting a chef’s hat?

This was and is the ubiquitous message that was vehemently orchestrated and perpetuated in once making America “great”. And I’m guessing that Rice got the memo to do his part in making sure, at this dawn of a new political age, that he helps make America great once again. 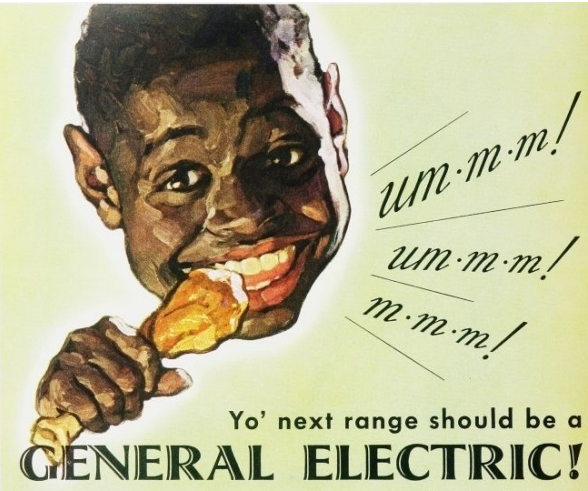 When I was coming up, if something was weak, irrelevant or wack, we’d say, “Man, that ain’t nothin’ but a chicken wing from Burger King!” I’ll say the same about Jerry Rice from here on out.

Guess he didn’t get the fried chicken memo that Paul Mooney sent to MC Hammer in the early ’90s entitled, “The Bullshit ain’t necessary no mo’!”

If he couldn’t see the subtle insidiousness in this commercial and what he was being used to portray, I say test the man for CTE! Because his brain is fried, and maybe there’s a good reason.

Or perhaps, he’s simply dumb, doesn’t care or just looking to cash a check, regardless of the larger racist and self-defeating message that he sends. Ayo Jerry, either way, you played yourself.

On the football field, you were and All-Pro, Jerry. In this Popeye’s commercial, you’re, “Aw Hell No!”