There has been endless debate about the NBAs all-time Big Three combinations. Since LeBron James has stormed the NBA and helped raise its marketability while changing the culture of competition, the term Super Team has emerged and nobody seems to have an accurate definition of what a Super Team is.

The NBA has truly had some great teams in the past, but according to NBA basketball guru Champ, a frequent live contributor on the Stephen A. Smith show, the NBA never had an actual Super Team until LeBron left for Miami which set off a chain of events that eventually led to KD bouncing to Golden State and changing the entire culture of basketball and competition.

They dont fit the criteria, when applying our standards of what a Super Team is.

Big Three Is A Thing Of The Past

CHAMP: “The NBA has always had Big Threes from Wilt, West and Baylor to Pippen, Jordan and Rodman to Chauncey Billups, Rip Hamilton and Rasheed Wallace.

Big Three is talking about who your best three players are. Its more about the names of the players than anything else. When those three guys are at the very least all-star caliber players, but fall short of the criteria of a Super Team. Like Nick Van Exel, Eddie Jones and Shaq back in his early years with the Lakers. Or Jason Kidd, Vince Carter and Richard Jefferson. That wasnt a SUPER TEAM. When Shaq and Kobe teamed up, giving the Lakers the two best players in the game,that could be considered a variation of a Super Team, but they didnt have the third assassin, which makes their title run even more remarkable.

Amare Stoudemire, Steve Nash and Joe Johnson was a Big Three, but not a Super Team.”

Definition Of A Super Team:

A Super Team is a team with three guys that prior to playing together in the NBA, were on other teams in the NBA as the best player on that team. They are Top 5 players in the game and they are also under 30 years old.

As history has shown, a Big Three or Big Four is deadly, but can be defeated. Super Teams are built to cripple the competition. Top 5 players in a league should NEVER be playing on the same team. When you discuss Super Teams, no one in that conference or the NBA factors into the title conversation because no one really has a chance of defeating them.

Breaking Down Origin of Super Teams

Champ: “It started with LeBron James, Chris Bosh and Dwyane Wade teaming up in South Beach. No one had a legitimate chance to beat the Miami Heat, certainly not in the East and then after that first season, no one in the league.

Lebron James was considered the best player in the world at that point. Dwyane Wade was already on his way to the Hall of Fame and a champion and the face of the franchise. And Chris Bosh was a 20 and 10 monster and a top power forward in the game, carrying a subpar Toronto Raptors to the playoffs.

When those guys went to Miami and then when KD went to Golden State, they put a cobra clutch on the league. Nobody in the East could beat Miami and nobody in the West is going to dethrone Golden State. Those teams are Super Teams.

Prior to Durant arriving, Golden State had a Big Three with Steph Curry, Klay Thompson and Draymond Green.

Only Curry has been the Alpha male on a winning team. We don’t know if Thompson and Green can go on and become Top 5 players and the man on another team. Theyve never had to do it.

When Durant joined the squad, having been an MVP with multiple scoring titles and a contender for best player in the game (and with Greens ascension into Charles Barkley status) Durants presence immediately elevated Golden State to Super Team status. 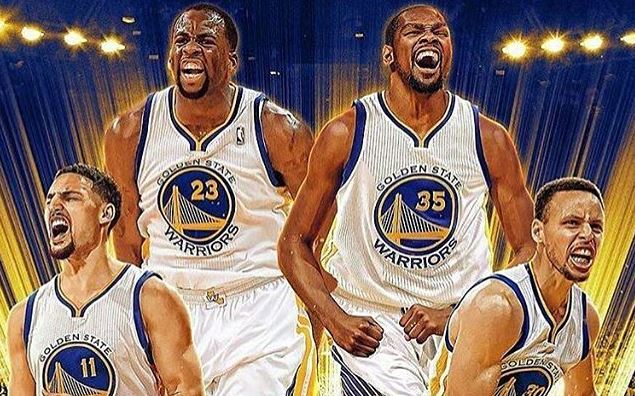 LeBron followed up his Miami Heat formula and used it in his triumphant return to Cleveland, teaming up with Kyrie Irving and acquiring Kevin Love.

Irving was the Alpha male and the lone All-Star on a rebuilding Cleveland Cavs squad and he was already one of the best point guards in the Eastern Conference. Kevin Love was a 26-point and 14-rebound superstar on Minnesota and the narrative was that he was the best power forward in the NBA.

Kyrie and Love were  No. 1 players on their own teams and Top 3 players at their respective positions. Combine them with the supreme player in the game in LeBron, who was barely 30 when he came home in 2015 and you have another Super Team. ”

On if OKC had a Super Team at One Point

Champ: “No. Imagine if James Harden, Westbrook and Durant, still under 30 years old, came back together now after having been stars, No.1 options and MVP candidates and formed a team. That would equate to a Super Team. In their first run as young, blossoming players, they could only be considered a Big Three.

If Kobe, Tracy McGrady and Tim Duncan came together in 2005, that would be a Super Team.

If Anthony Davis, Boogie Cousins and Stephen Curry or John Wall come together, then that would be a Super Team.

The definition should be clear now. If you have three guys, in the prime of their careers,  who have all been the best at their positions and all been the Alpha Male, go-to pitbull crunchtime killer on their own team and then they come together, then you have a Super Team.

Later, Im going to tell you why Super Teams have destroyed the NBA.”

Isaiah Thomas: A Marvel Of Perseverance