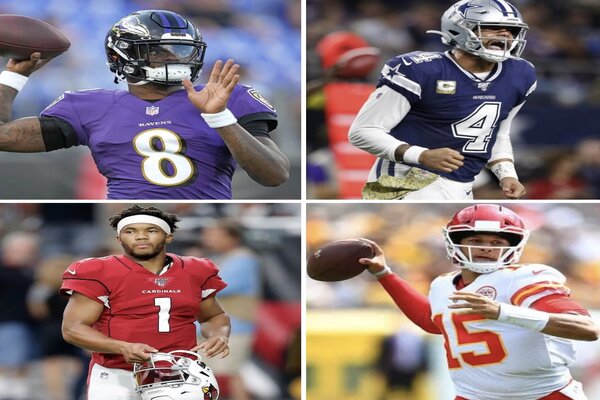 As we prepare for the 2021-22 NFL season, here’s a look into those Black signal callers who’ll be taking the field around the league.

We begin our rankings in Kansas City, where Patrick Mahomes is still in charge of the league’s most dynamic offense. He’s led the Chiefs to back-to-back Super Bowls, winning one and losing one. KC has to protect him better and they did a great job upgrading their offensive line this off-season after he scrambled around for a record 498 yards in their SB loss, and no these weren’t positive yards.

This is why the NFL is captivated with Patrick Mahomes:
pic.twitter.com/FfZyjkK5ra

If Andy Reid can protect Mahomes, KC will be right in the thick if the Super Bowl race.  Mahomes was just voted #1 in the NFL Top 100 players, for the first time by his peers.

After a few contentious months in the Pacific Northwest following a home playoff loss to the Rams, it looked as if Russell Wilson had played his final game for the Seahawks.

But Wilson is back after lengthy talks with the front office. Through the first nine weeks of the 2020 season Wilson was the leading candidate for MVP. The team’s porous defense and lack of a running game played a role in Wilson slipping out of contention as he was forced to try and outscore teams weekly.

In doing so, he made plenty of plays and more mistakes than he and us as fans have become accustomed to.

That’s just how the ball bounces because without RW3 the Hawks are a 6-7 win team at best, and I’m glad management realized this before they made the catastrophic mistake of trading a superstar QB with plenty left in the tank.

Deshaun Watson is a great player capable of turning a franchise around in an instant. He’s shown the ability to be elite and durable. However, with him facing all this off-the-field legal trouble, I don’t know if we’ll see him play this season.

I truly believe the next time we see him take the field it’ll be in South Beach as the signal caller of the rising Miami Dolphins. Watson has A-1 quarterback talent and maybe we’ll get to see it again at some point in the future.

This season he’ll be looking to take the birds by way of “Charm City,” a few steps further. While there’s been a lot of talk about him not being vaccinated and having COVID-19 twice, there’s no question of his value to the Ravens.

Without his dynamic presence and leadership, this team is just solid and fall out of Super Bowl contention. LJ will be asked to shoulder an even bigger load with the season-ending injury to rising tailback JK Dobbins. The former MVP, who led the league in TD passes a few seasons ago, is up to the task and ready to prove that the league hasn’t “figured him out” as some prognosticators suggested.

Dak Prescott returns from his season-ending ankle injury, but prior to the injury Prescott was putting up video game numbers for a Dallas Cowboys team lacking any presence on the defensive side of the football. He’s back and looking to pickup where he left off. With an improved defense and weaponry surrounding him, expect another big year from the “Hail State” alum.

Kyler Murray – The electric Murray needs to take that next step, but he’s being somewhat hindered by the unproven and very overrated head coach Kliff Kingsbury. This is a big year for the diminutive one in the “Valley of the Sun.”

Jameis Winston – Gets his shot at redemption under Sean Payton in Nawlins. The former Heisman winner and NFL TD passes leader was very good in his final preseason start, winning the starting job.

Expect a big year for the one they call “Crab Legs.” Having Alvin Kamara will help immensely.

Cam Newton – He’s in a battle with rookie Mac Jones, who’s chomping at the bit if Cam continues to look as if his arm is shot. This is probably Newton’s final chance to be a starter. We know Bill Belichick won’t hesitate to play Jones of he’s the best option.

Jalen Hurts – Hurts is a consumate pro and showed some promise in limited time last season. In fact, he showed enough to allow the Eagles to part ways with 2016 No.2 overall pick Carson Wentz. On the other hand, signing veteran and Super Bowl winner Joe Flacco and then trading with the Jaguars for quarterback Gardner Minshew is an indication that Hurts i still on major probabtion. The rumpor report has it that Philly is also trying to trade for the embattled Watson, but to no avail at this point.

Tyrod Taylor – Taylor is a solid QB who’s had some unfortunate circumstances overshadow his play over the years. He’ll probably start for the debacle also known as the Texans, holding fort, while Watson’s off-the-field stuff gets resolved.