When Jimmy Carter's grandson brought the "47 Percent" video into the light of day, it became the most scrutinized political recording since Zapruder or the Nixon White House Tapes. But until yesterday, the identity of the man or woman behind the video remained shrouded in mystery. However, on Wednesday, bartender Scott Prouty revealed himself to be the video's creator.

One of the most influential figures in the 2012 election, the bartender who secretly filmed Romney at a private fundraiser in Boca Raton, Fla. last May had been anonymous until now.

“I was behind this whole thing,” Prouty said.

The bartender said he brought a camera to the fundraiser in case Romney came back to take pictures with the staff, as former president Bill Clinton had done at another event Prouty worked. ”I didn’t go there with a grudge against Romney,” he said. “I really had no idea he would say what he said.”

Prouty also seemed prepared for his vilification by the right wing media, but stated that he is not a Democrat. It doesn't matter either way; Democrats everywhere owe him a drink. But since he's already knee-deep in booze, he should at least see an uptick in his tips. 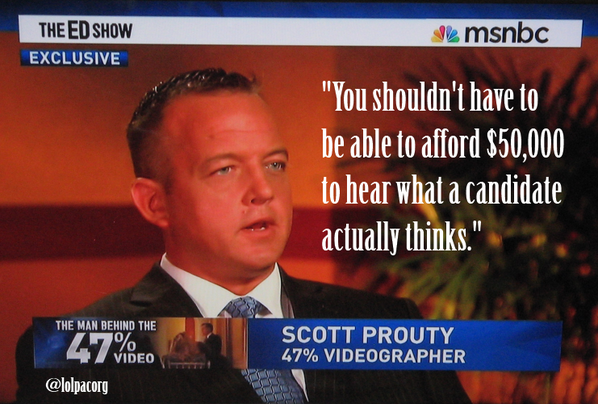