BALTIMORE, Maryland — The death of Freddie Gray in police custody last year sparked protests and unrest that thrust Baltimore into the national spotlight. In rare moments after the upheaval, media members descended on areas where abandoned row houses outnumber homeowners, arrest records follow the underemployed in a city where good jobs are hard to find, and where addicts can’t find treatment centers and children can’t find recreation centers to play.

Today Officer Edward Nero was found not guilty on all counts in a packed courtroom in the second trial relating to the death of Freddie Gray. Nero, one of three arresting officers, elected a bench trial as opposed to being tried in front of a jury. Judge Barry Williams gave the verdict after mulling over the evidence for three days.

Nero was charged with second-degree assault, reckless endangerment and two counts of misconduct. One count of misconduct and the reckless-endangerment charge related to Nero allegedly putting Gray at risk when he put him in the arrest van without a seat belt.

As helicopters whirred overhead at the downtown courthouse on Calvert Street when the verdict was announced at 10:30 AM, only a handful of protesters held signs and chanted slogans about injustice at the hands of police. At one point, they followed Nero’s brother who left the courtroom through a side exit. One person yelled after him: “You’ll rot in hell!!”

But all was quiet in Gilmor Homes in the Sandtown-Winchester neighborhood where Gray grew up and would die at age 25, one week after suffering a severed spinal cord and a crushed voice box in a police van. Many of the residents hadn’t heard the verdict yet by early afternoon.

Nero was largely acquitted because Williams ruled that he played a minimal role in the initial arrest of Gray, that he was not properly trained in seat belting passengers and that his superior officers and the wagon driver would have held more responsibility in seat belting him.

William Tyler, 44, carried his trash out on his stoop across the street from Gilmor Homes a few hours after the verdict. He is a staunch advocate for young people in his neighborhood in Sandtown. He referred to Gray as his “nephew” and remembered having him over his house to eat.

“It’s called guilty by association,” Tyler said about Neros role in the arrest. If I’m here selling drugs and you lock me up and hes a look-out, then you lock him up. Nobody killed that boy in this community. Police officers killed him. Freddie kept asking officers: Where’s my inhaler? and they didn’t give him one. That’s wrong.”

Most people weren’t surprised at the acquittal. Sharon Black, a white woman who has lived in Baltimore for over 40 years and is an organizer with the People’s Power Assembly, has been organizing petitions for Grays trial and other trials around police misconduct in the city. She said the corrupt culture of policing in Baltimore is on trial.

“We are constantly interviewing people in the community that think the police go unchecked,” said Black. “Its not just about these six officers, its about a system cracked completely with racist and class bias.”

Black says not only were most people in the community not expecting a conviction, but even if a conviction occurred, they didn’t expect to see change in policing in their neighborhood.

Residents spoke about the alleged practice of Rough Rides, where police deliberately leave a detainee without a seat belt in the back of a transport van and accelerate and decelerate the van abruptly causing the detainee to be jostled around. The alleged police practice, often used for confessions or to get detainees to give information on crime in the area, has not yet been discussed in either the William Porter trial that ended in a hung jury or Neros trial.

Numerous lawsuits have been brought against the Baltimore Police Department because of these rough rides. A report by the Baltimore Sun found that the city has paid millions to victims, like the family of 43-year-old plumber Dondi Johnson Sr., who was left paralyzed in 2005 after being recklessly driven around by police, leading to a $7.4 million settlement.

A clause in the contract of these settlements requires that victims not speak to the media or make a statement after they have received a payout. Its taxpayer money that could be funneled into recreation centers or badly needed infrastructure projects.

Several witnesses, including senior officers, testified during the trial that they have never seat belted detainees, despite it being a mandatory policy in police general orders. The defense argued that Nero was not trained on transporting detainees or seat belting them and that the prosecution couldnt prove if he had read an email mandating that there is no discretion allowed in seat belting passengers.

In a bench trial, much of the ruling is focused on legal minutiae.

I think they did the best they could with the evidence they had, said Douglas Colbert, a University of Maryland law professor who has been following the trial daily in the courtroom. I feel like the evidence did support some convictions on these counts. I have a lot of respect for Williams, he certainly provided a fair trial, but we can agree to disagree.

When you leave someone in the back of a police van, handcuffed, shackled and on his face on the floor and you dont provide seat belt protection, its likely someone will get injured seriously,” continued Colbert. “I hope we learned from this trial and I hope police will treat people taken into custody with much greater protection. 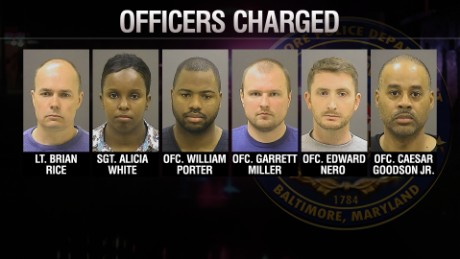 The next case will begin on June 6th with Officer Caesar Goodson, who was the van driver who transported Freddie Gray. He is charged with second-degree depraved heart murder, which carries a 30-year penalty, involuntary manslaughter, assault and misconduct.