Once the standard bearer for all things Black and masculine, former Cleveland Browns Hall of Fame running back Jim Brown is now one of President Donald Trump’s most ardent defenders. We need to take that in for a moment. See, this is the same Jim Brown who once spoke out for players rights in the National Football League, and was one of the strongest African American athletes speaking out against racism at a time that was not kind to people of color. He also encouraged other black athletes to do the same. I recall transcribing an interview between Brown and a syndicated radio host and black web pioneer nearly 20 years ago for his Amer-i-Can outreach program for inner city youth. The man’s voice spoke of defiance, of activism, and of uplifting the kids.

Now he appears to have access to more power and influence than he has experienced since his playing days 52 years ago. And there is the possibility that he still feels as strongly about uplifting inner city youth as he did all those years ago. Yes, I would like to think so.

We all have those. Yesterday, veteran columnist and sports journalist Kevin B. Blackistone wrote a story titled Jim Browns love for Donald Trump is at odds with the man weve come to know, where he pulled a quote from Jackie Robinson’s 1972 autobiography in which he regretted allowing himself to be used as a weapon against athlete, performer and activist Paul Robeson.

In those days I had much more faith in the ultimate justice of the American white man than I have today, Robinson stated more than 20 years later in I Never Had It Made. I would reject such an invitation if offered now.

“I have grown wiser and closer to the painful truth about Americas destructiveness, he continued. And I do have an increased respect for Paul Robeson, who sacrificed himself, his career, and the wealth and comfort he once enjoyed because, I believe, he was sincerely trying to help his people. 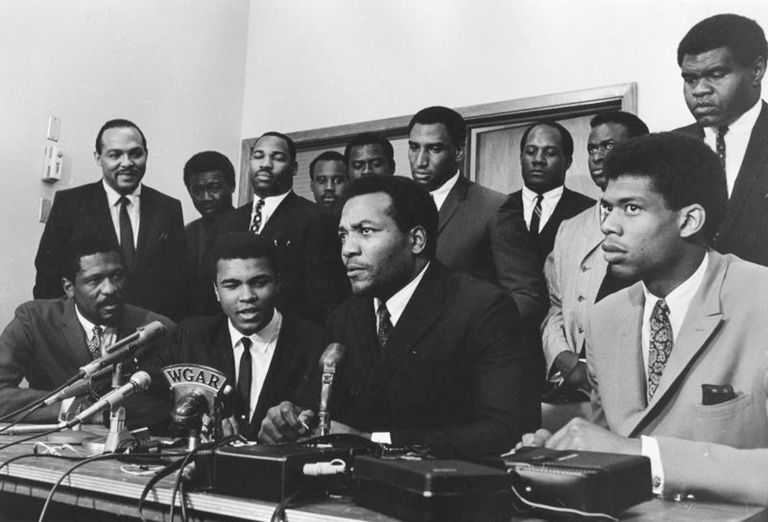 Indeed, if history doesn’t exactly repeat itself, the sequels sure do follow the same trajectory. Brown, who has spoken out against the activism of Colin Kaepernick, is now allowing himself to be used by Donald Trump. But what if ol’ Jim is wilier than we’re giving him credit for? Yeah, what if we’re on the verge of an inner city rebirth with Trump funds providing the catalyst, and Brown being the lens? Indeed, if “if” was a “fifth” we’d all be about to tip.

The fact is that Donald Trump has already alienated many of his closest constituents, and history says Brown has likely burned away decades of cache within the black American community with his endorsement and will not get equal value in return. Will he too pen regrets in a latter day memoir? Only time will tell. But Malcolm X summed up this circumstance decades ago and speaks of it across space and time in this clip.