Im The Bee – The One That Ali Told You About.

Amaiya Zafar is used to pushing herself – outside of the ring and in it. The 16-year-old amateur boxers name has become synonymous with fighting for justice and inclusion. Zafar is a practicing Muslim but her dedication to her faith has proven to be an opponent of sorts.

The headscarf that she chooses to wear was an issue of contention in the boxing community. USA Boxing follows regulations from the International Boxing Association (AIBA) and does not permit boxers to wear head-coverings or clothing that covers the arms and legs.

She has been training seriously for almost four years, but in an unprecedented moment, she fought her first – and historic – bout on Saturday. It has a been a long battle, and there are many rounds to go.

Like other sports federations, USA Boxing cites safety for the reasons to limit uniform accommodation. In September 2015, Michael Martino, then acting head of USA Boxing, stated that allowing for religious clothing would be a problem. Players are expected to wear clothing that allows the referee to see their bodies in order to be able to judge whether they have a injury or not.

Zafar wears tights and a long-sleeved shirt under her boxing outfit . Without any formal ruling from the sports international governing body, USA Boxing expressed that they were limited in directing what officials could do.

We have 30,000 amateur boxers in the United States, Martino explained of the hijab-ban in an interview. So if you make allowances for one religious group, what if another comes in and says we have a different type of uniform we have to wear? You have to draw a line some place.

So, they drew a line. They prevented Zafar from boxing at all.

One might expect that a regulating body would elevate the sport and accommodate with uniform requirements and clothing options to ensure that the most amount of people possible would join the sport; particularly women – considering that in the not-so-distant past, the womens boxing scene in the USA has struggled.

I spoke with Zafar by phone and asked her if she knew about the hijab-ban when she started boxing.

I had no idea, she said. I asked local officials  and they were, like its no big deal.

She did not expect her boxing to make her an sports advocate. 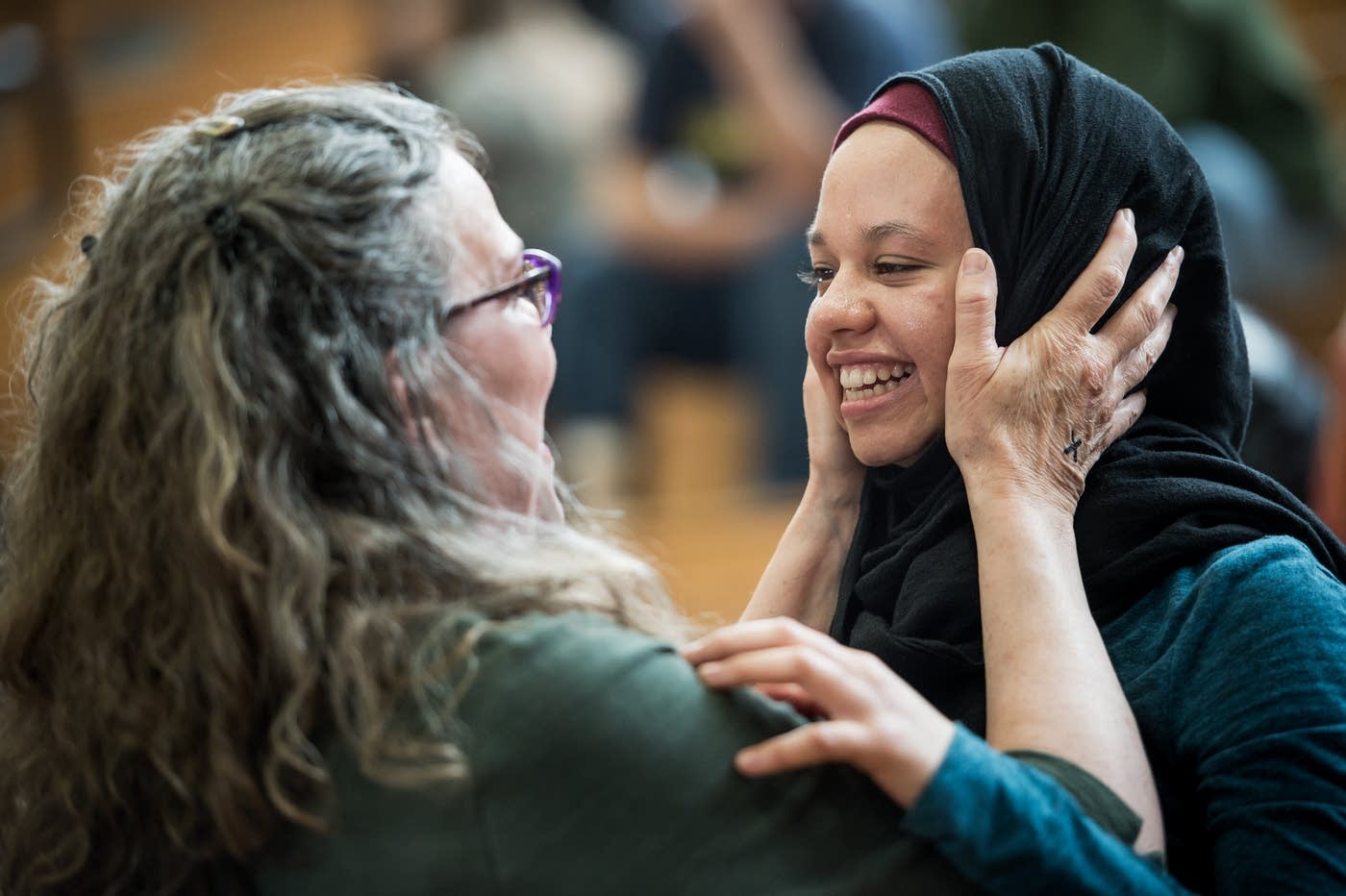 There is no safety issue – I proved it this weekend, Zafar said confidently. In amateur boxing, [because of my hijab] I dont even get the same rope burns.

As far as harming other boxers in the ring, she giggles. What am I going to do? Smother her with my tight hijab? We both laugh.

I asked her if she ever considered de-jabbing (removing her scarf) for sports?

She answers as fast as she jabs.

No. Not even for a second.

This is what it means to hit like a girl! (My daughter Amaiya!) #motivationalquotes#Boxer@HollyHolm@RondaRouseypic.twitter.com/EPYH1uwOgZ

The Council of American-Islamic Relations (CAIR) has been supporting Zafar and her family in their campaign to allow her to box. She has done a tremendous amount of press and also speaks to school kids about her plight.

Zafar is a young woman who knows what she wants; and what she wants is to box. She is remarkably poised and articulate. I feel grateful when she laughs at a few of my self-deprecating jokes. She is also extremely polite and I hear her mother, Sarah, in the background. 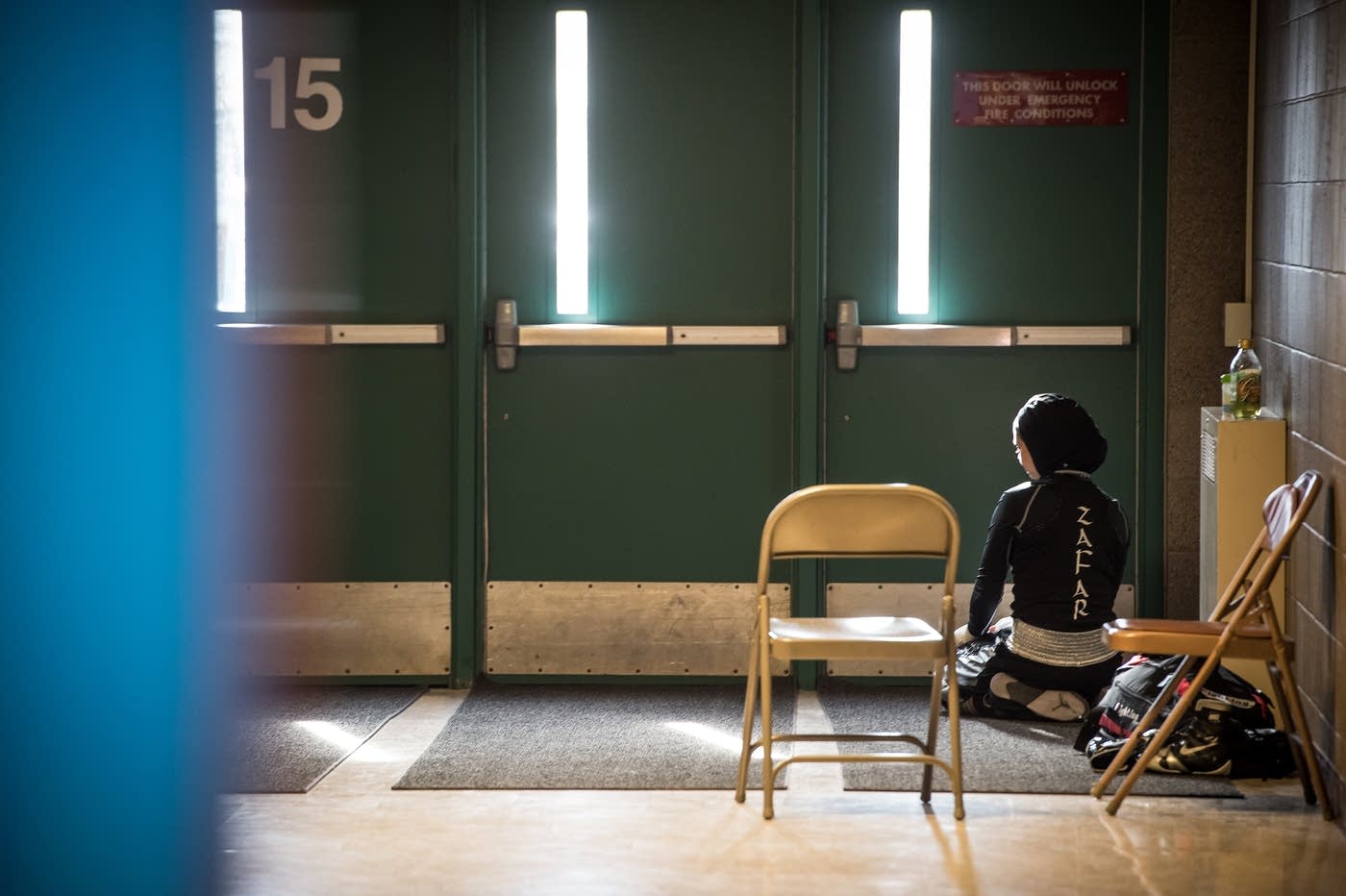 But she tells me that this journey has not been an easy one and she is so grateful for her boxing family- the Circle of Discipline gym where she trains. Their motto is: Work hard to make it look easy.

I have high standards for myself, she says. Because the gym I am in, we are members of a family and we are held to such high standards, who I am inside the ring [sic] and outside.

The passion in her voice is telling. The work she does makes her stronger. Any road in which one has to battle a sports federation for access is not an easy one, but Zafars resilience is obvious.

She has faced Islamophobic comments. Zafar is mixed-race and an identifiable Muslim woman. Once she overheard a local coach from another gym yelling at her partner as they sparred: If you knock her [Zafar] down, Ill give you $20 – if she cant get up I will get you $30. I asked her more about this coach. He is a known racist, she says plainly. Zafars voice is even and she seems unfazed. She has a vision and she has support. She doesnt have time for haters.

She emphasizes that her coaches, her teammates and the boxers have been nothing but supportive of her.

I grew up around boxing – doing it… its a big tool [sic] of what raised me. My coaches, my parents and my team made me who I am.

It is this tight-knit group, including professional boxer Jamal James,  with whom Zafar trains in the gym,  who have been supporting her with every jab-cross combination, every skip, every run and every time she puts on her handwraps. She is a part of, arguably, the best gym in the region and trains alongside other aspiring boxers whom she considers brothers. 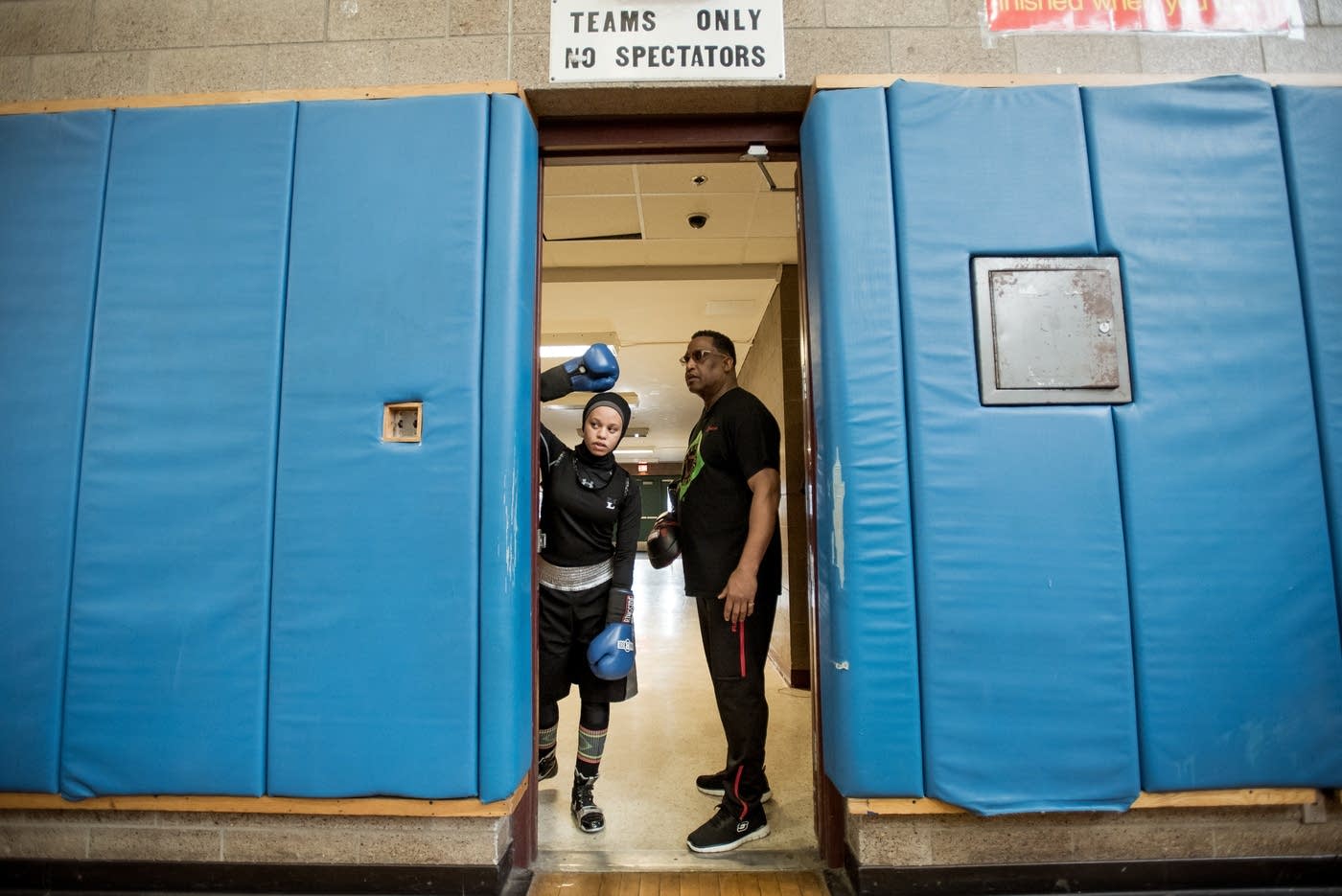 In addition to the people in her gym who show me everyday and lead by example, Zafar looks to Claressa Shields as a role model. She explains why the two-time Gold Medalist is her inspiration.

Shields is from Flint. She came up anyways, despite the odds, even when people said she couldnt.

Zafar speaks of Shields with so much certainty that it makes perfect sense.

Odds are something Zafar is quite familiar with.

In November, Zafar traveled to Florida for a bout but was immediately disqualified because of her outfit. She did not even step into the ring. Her opponent, Aliyah Charbonier, was declared the winner. But Charbonier decided that was unacceptable and she had other plans. She went over to Zafar and told her she was going to share the prize belt.

It was such an emotional moment. It turned going to Florida and getting disqualified into one of the best things to happen, Zafar recalls. When Aliyah gave me her belt, things changed. I had never met her [before that Florida trip] but she is my sister. We are really close friends now.

Charboniers actions drew national attention and became the catalyst for what would come next.

It showed USA Boxing that we werent going to let it slide, Zafar says proudly.

To hear her explain its significance makes me realize that in that moment, these young women encapsulated allyship and camaraderie in sport.

A few months after the incident in Florida, USA Boxing decided to grant Zafar special permission to box locally with a waiver that she must apply for prior to each bout. It might not be a clear path to compete anywhere, but it would get Zafar where she belongs – in the ring. Her team registered her for the Spring Fling Amateur Event.

This past Saturday, Zafar suited up and fought in her first bout. She is the first woman in the history of the United States to be permitted to box while covered. There were cameras and fans and lots of supporters. She tells me proudly that the outfit she wore to that first fight was a gift and made by Aliyah Charboniers mother- something that might seem like a small detail but is so profound and important in this story.

Zafar did not win her first fight and she reflects upon that with wisdom and patience.

It is a bummer to lose my first fight, there was so much pressure, she said. I did everything, I trained hard, I prayed. But every step of the way, I did it for Allah almighty. And I fought [the hijab ban]- and we did it.

She tells me that she has more work to do but feels blessed for those around her.

It is a team effort. I wouldnt be able to do it without my team, my coaches. My coach

didnt acknowledge the fact that I lost. He said You are 16 and you did it!

Zafars team knows that her stepping into the ring was a win in itself. 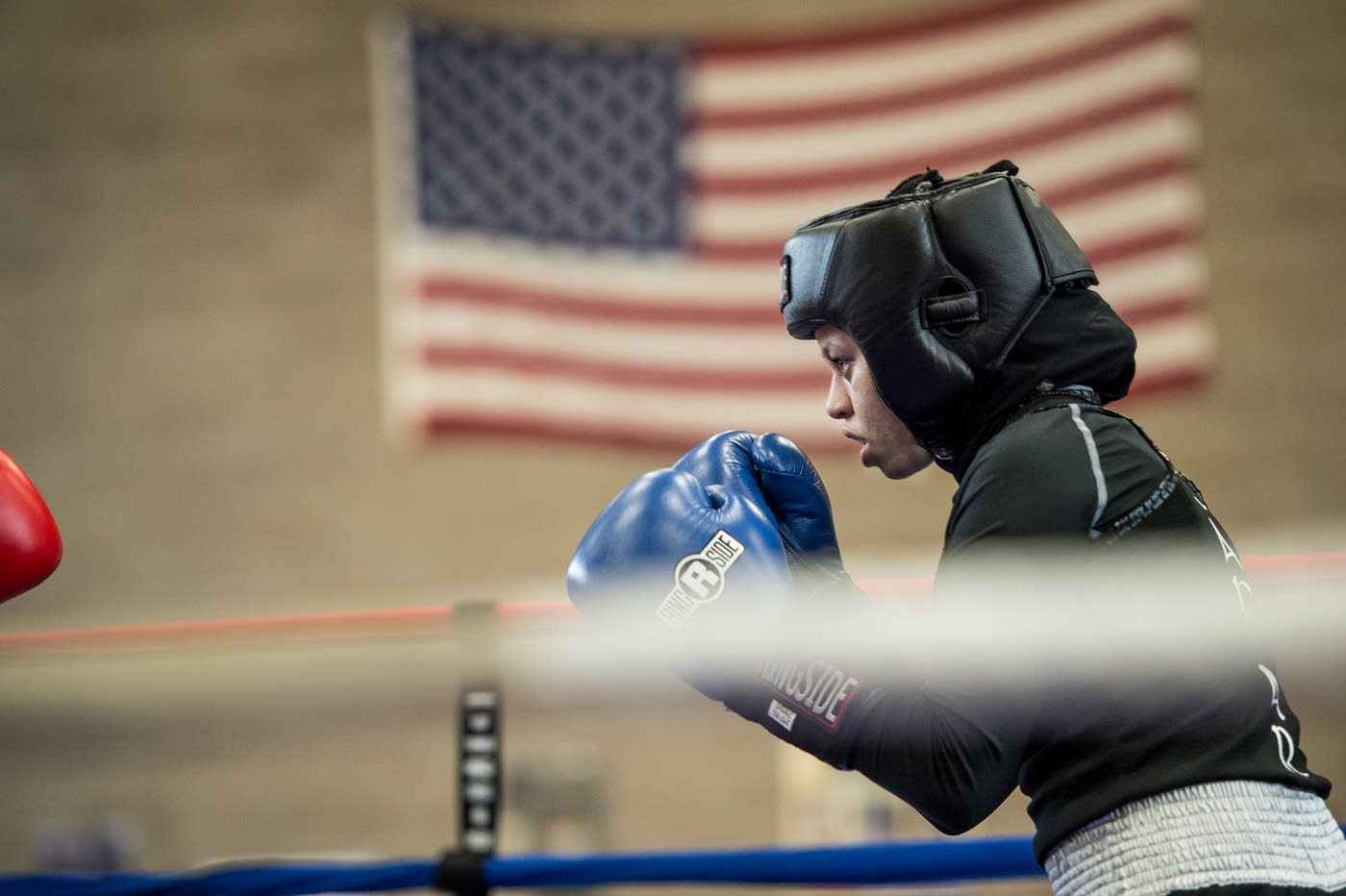 I ask her if she understands that she is changing the culture and possibly the trajectory of many young girls in sport. She laughs modestly and tells me how she finds having fans to be hilarious. But she definitely understands the effect she has on younger children when they see her.

She tells me about when she was speaking to a group of school children and made eye contact with a little girl in the front row.

She was very tiny, with short hair and freckles. I was talking with and winked at her. Just to, you know, keep engaging her, Zafar says. I looked at her and said, You look strong, girl! Nobody is going to mess with you!

Much later, the teacher delivered handwritten notes to Zafar and one of the letters was from that little girl. She wrote a letter, Zafar tells me, clearly moved, saying she has gross motor disabilities and she is small and no one had ever called her strong before. And now she was going to be strong. This is one of the little girls that look up to me.

In a heartwarming Facebook post, her father, Mohammad Zafar, thanked everyone who has supported his daughter and he said that the Minnesota Historical Society has requested her family to save her outfit so her story and her boxing uniform can be preserved and put into American Boxing History.

As for the future, Zafar tells me that her dream is to be part of the USA Olympic team and she has her sights sets on the 2020 Games. With help from her family and team, if she continues training, and if AIBA decides to do the right thing, similar to the recent FIBA ruling in basketball, and allow amateur boxers like Zafar to fight so she can get more exposure, there is no doubt that her tenacity and passion for boxing will help her soar.