There’s thinking among some sectors of this country is that America doesn’t really jump to action until white people are affected. So, for instance, Tipper Gore didn’t really light a fire under the RIAA in the 1980s until Prince and 2 Live Crew threatened to turn out suburban girls, Ice-T threatened law enforcement or Geto Boys were blamed in a court of law for hypnotizing two murderers. As it goes, America will all of a sudden outlaw twerking now that it’s the go-to embodiment of Miley Cyrus’ descent from Magic Kingdom to Magic City. Only the most debilitated of victims would buy wholesale into this narrative, but only an ignoramus would totally ignore it. Protectionism is a real thing.

And so, as we try to understand what’s with the onslaught of new support for changes in the exploitive practices of big-time college athletics and the players they mime for millions, some of us have turned to Johnny Manziel’s skin color. Desmond Howard seems to allude to it in code when he wonders about the absence of public support for investigated athletes, such as Terrelle Pryor and A.J. Green a few years ago. Tyler Duffy, in response to a column likening Manziel to Rosa Parks, thoughtfully countered with an Andrew Goodman/Michael Schwerner analogy. Jason Whitlock made several salient points when he suggested that maybe the sham of amateurism is finally garnering the scorn it deserves now that a good-looking white kid is in the crosshairs. And our man Bomani Jones did his best to blunt his cynicism when welcoming folks to the NCAA-hating party. 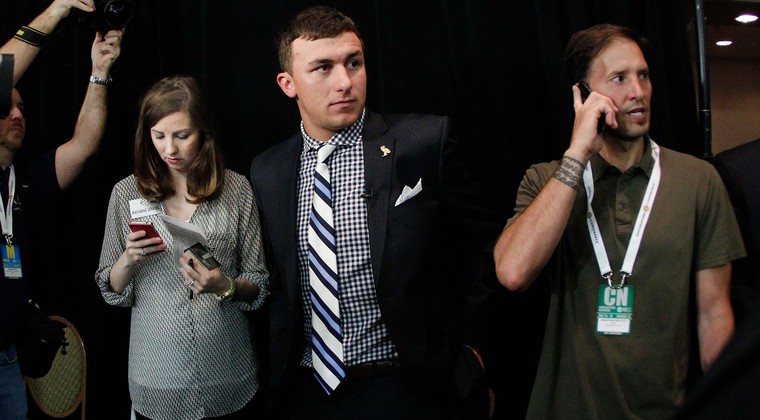 The NCAA can't control a player that doesn't need it.

The Manziel Effect can’t be denied when processing the public’s change of heart on this issue. But, America is increasingly changing their minds on this issue because white men are telling them to.

Even before Jay Bilas’ expose via Twitter a few weeks ago put NCAA hypocrisy on Front Street – when he revealed that you could search for school apparel via players’ names and numbers – he had spent the very recent years banging a loud drum. In 2011, after a spate of NCAA sanctions (OSU, UMD, etc.), he said plainly that the NCAA and its member schools are “ the only enterprise in American sport where you're prohibited from benefiting at all. And you're prohibited from benefitting while somebody else is benefitting from your name and likeness. ”

This is important because white men make up the college sports complex and, perhaps more than any other ethnic gender, white men generally only listen to other white men.

“The focus should be on the NCAA's policies, and to really examine why the athlete, and only the athlete, is restricted to expenses only in this multi-billion dollar, professional, commercialized enterprise. I believe the more that people focus on the policies themselves, and the reasons behind those policies, the more they'll realize that the policy justifications the NCAA sells to us on amateurism and the other restrictions on athletes are just like the "justifications" the NCAA tried to sell to us on these jersey sales. They're nonsense and phony.”

Jalen Rose has been telling us this for years. But America’s listening now. It ain’t hard to figure out why.

It’s a version of identity politics, a manifestation of America’s default assumption of leadership. As part of a Western culture that, just a few generations ago, was contemplating the White Man’s Burden of caring for us less capable folk, we (society) are just now breaking those mental chains. America voted a black man into the White House in these last two elections, but, uh, this was in spite of the white male voting block . 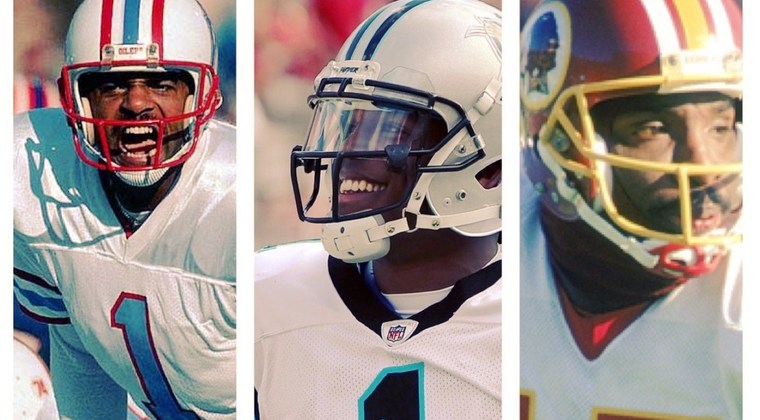 The "Black Quarterback" Is Dead

The NFL quarterback position is post-racial.

There are many reasons something like voting along ethnic and gender lines can occur – some as innocuous as tribalism, some as nefarious as racism. White men have the most conditioning to counteract because, unlike every other ethnic gender in America, they haven’t spent most of their lives under the authority of someone that doesn’t look like them. Barack Obama was the first black President in this nation’s history – he just broke a 220-year white male monopoly.

It isn't just in politics either. There was this interesting passage from the 2012 Los Angeles Times article “ Why does ‘CEO’ mean ‘white male’?”:

It's like that old riddle about the man who drives his son to a baseball game, and the car gets stuck on the railroad tracks. A train comes, the father is killed but the child survives, though in critical condition. When paramedics get him to the hospital, the doctor says: "I can't operate on this boy; he's my son."

To this day, people come up with explanations such as alien abduction to solve the "who's the doctor" riddle rather than simply recognizing that it's the boy's mother. The default assumption says doctors are men.

Try this experiment: Quickly picture in your mind's eye a doctor, an airline pilot, a CEO, a hedge fund manager, a newspaper editor, an engineer. Most people's mental picture will quickly register tall white men … Even if you know a short black female CEO or a guy in a wheelchair who's a physicist, you probably won't revise your default assumption. You'll consider these cases "exceptions."

The American ruling class remains a white male dominance of leadership. Although the 113th Congress was the most diverse to date (white men no longer make up the majority of House Democrats, more women than ever are serving at the same time), it is still overwhelmingly white male – especially in the Senate. And although the fraternity of Fortune 500 CEOs sees more women and minorities each year, the current numbers still exhibit that white men have it on lock.

As the country rapidly becomes more diverse, white men is still the ethnic gender the populous elects to office and hires as executives. Some of this involves a ruling class’ manipulation to stay in power. Some of this has to do with our default assumptions of who’s fit to lead, who’s fit to make to decisions, who’s fit to tell us what to do.

Where we’re at right now, it’s a tough racket to bring about #NewRules when it comes to telling white men what do with $6 billion unless a critical mass of white men are telling them the old rules need changing.

Talking 'Bout A Revolution: Millennials Must Embody The March On Washington

No one wants to join the cesspool in D.C., but someone has to in order to clean it up.

We get talked at in this country, too. News anchors, radio hosts, columnists – and the editors and producers that help direct them – are mostly white men. More and more, these men are beginning to offer impassioned arguments for NCAA reform when it comes to either how it distributes its profits or the way it polices its athletes (or they just throw shade). This week on Keith Olbermann’s excellent new late-night show on ESPN, Tony Kornheiser seemed to suggest (and not for the first time) that athletes at big-time programs put together a union. Olbermann actually wondered if Manziel’s alleged autograph stunts were some type of principled, conscientious objection to the NCAA’s draconian M.O. John Stewart’s The Daily Show was home to Aasif Mandvi’s quest to skewer the NCAA’s “Perfectly Fair Rules.” Some national columnists have changed their minds altogether and are now calling for player compensation, probably after reading “The 6 Billion Heist: Robbing College Athletes,” a report that finds many athletes with an average of a $3,000 shortfall from the cost of their full athletic scholarship. And now here comes Congress.

The world of big-time college athletics is a bastion of the white male monopoly. College presidents are mostly white men, as are athletic directors, coaches, boosters…and fans. You don’t start to see a lot of color until you look on the field or hardwood. As these white men and their families, neighbors and co-workers finally start hearing and seeing other white men cajoling and wagging fingers – Manziel-motivated or not – it’s means more in this country.

This is not ideal, but it is the current reality and it goes across the board. For instance, below is a variation of a conversation that has taken place thousands of times…

Black Man A: I’m going to start watching how much fish I eat. Too much mercury. Not healthy.

Black Man B: Man…I was trying to tell you I read that that a few months ago and you told me to kick rocks.

Black Man A: Yeah, my co-worker Bob said he saw it on the news.

Black Man B (in exasperated jest): Oh, so a white man tells you and it’s gospel, huh?

Fifteen years from now, someone’s going to make a film documenting how the purveyors of the exploitive practices of big-time college athletics were finally called to task and overthrown. Maybe it’ll use Ed O’Bannon, Desmond Howard or Ramogi Huma as the basis for the central character. Bradley Cooper or John Krasinski will probably play the Jay Bilas role and they’ll probably win the film’s sole Oscar.

Even as America changes, it is still the country of Walter Cronkite and white male presidents – words hold more weight coming out of a white man’s mouth.

Bilas is almost universally accepted as an aggressively intelligent man, a measured voice on many topics and having no dog in this “college athletes’ rights” issue. For the past few years he has taken it to the NCAA’s hypocrisy with too much substance, cogency and acidity to be ignored. Others are following and they’re changing minds, because that’s still what white men can do in this country easier than the rest of us.