Morgan Park’s Marcus LoVett Jr. put an end to months of speculation about 12:47 am West Coast time when he and his dad called me to let The Shadow League know that he signed his National Letter of Intent to play at St. John’s. The star guard, who is a human highlight film of basketball bravado chose Red Storm over a group of schools that included Illinois and DePaul.

“‘It’s the best decision that I ever made for myself in my life,” Lovett told The Shadow League this morning before he ran inside his school building to handle his educational responsibilities.” I’m going to the bright lights of NYC.”

Schools such as Memphis, Georgia Tech and other suitors either never really had a chance or blew there’s once The Shadow League put a pen to the process. All Mullin had to do was call and respect the 6-0 beasting baller’s game.

“I had a lot of opportunities, but my family thinks this is the best place for me and my skill set. I’m interested in bringing the show back to St. John’s and helping make NY basketball the spot again. Why not come to the biggest media market in the world? We wouldn’t have it any other way.”

St. John’s basketball and the new Big East have gotten off to a semi-slow start since the dramatic departure of some of the Big East’s flagship schools. Marcus’ dad is confident that will change. “All he needs to do is touch the floor,” Lovett Sr. told me. “If he does the things you saw on video in that town. He should own it. Its the best situation for Marcus Lovett in the world.”

Second Time Is A Charm

Marcus LoVett and his dad Marcus Sr. met St. John’s Coach Chris Mullin and his son when the boys were about 11 years old playing in a basketball tournament in Las Vegas. Lovett Sr. says they exchanged numbers with “Mully” but they never really spoke about his son’s future or basketball in general.

A decade later, LoVett Jr., now a teenage point guard and one of the nation’s most exciting ballers, has teamed up with Chris Mullin at St. John’s University. By the looks of things, the flash is back in Queens and St. John’s basketball is destined to be a big deal this season. It all starts with the first-year coach, his new recruits and the freshman phenom from Chicago via California, who has a game so profound and flushed with flair that only one city can contain him or satisfy his appetite for world domination — The Big Apple. 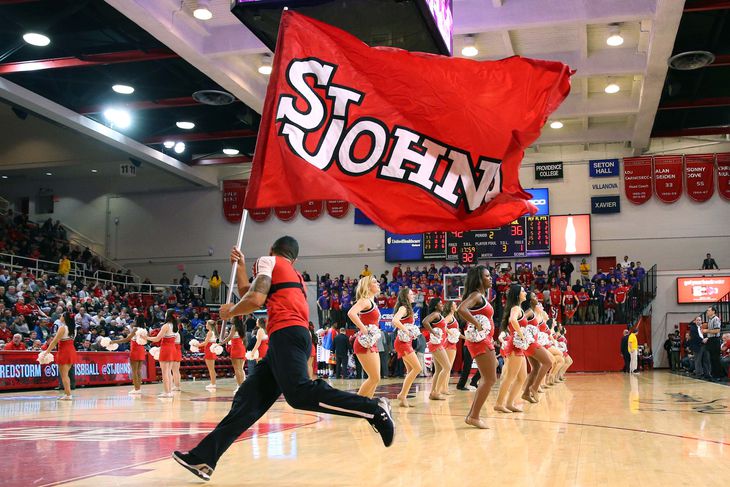 When I first spoke to Marcus Sr. in April and he expressed his son’s desire to attend St. John’s, be coached by a NY basketball legend and be a major player in the Red Storm rebirth, it was too good to be true. The perfect NY-style point guard for the city’s No. 1 college team.
My St. John’s people called me and told me that Mullin wanted Marcus. Marcus told me he wanted St. John’s. The piece I published in April, “Mullin Is In. Now St. John’s Should LoVe-Ett” basically wrote itself and within a few months the marriage made in basketball heaven was consummated.
It was pretty simple as I saw it:

“Mullin needs to bring in a statement player that is not only sickly talented, but fearless and has a basketball identity that embodies the original spirit of the Big East and the principles Mullins game was birthed on (which in essence are the fundamental life principles of legendary St. Johns coach, Louie Carnesecca).”

Now the idea has become a reality.
“The Knicks didnt get the No. 1 draft pick but Chris Mullin did. St. John’s did, ” said LoVett Sr. “David Letterman is gone, but Marcus Lovett is here.”
New York fans beware. The Marcus Lovett show is about to touch down in Queens and if anybody knows how to put the finishing polish on a kid who has one-and-done written all over him, it’s the bushy-haired to buzz cut, sharp-shooter from Brooklyn who dominated in the Big East glory years of the 80s and then put a cherry on a Hall of Fame career by shining as a member of the original Dream Team — the greatest compilation of basketball talent ever assembled.
While Lovett may be originally from California, his game is oozing with NYC swag and I compare him to Allen Iverson in that regard. Iverson was from Hampton, Va. but his personality, city swag and prolific game fit Philly so perfectly that fans forgot he was a country boy. If LoVett pops the right way in Queens, the Cali kid could single-handedly shift the recruiting ball back in New York City’s favor. He’s here to help give The Big East an identity again. One that reflects it’s geographical roots.
“We want to make New Yorkers and recruits to not ever want to leave the state,” Marcus Sr. added.
My basketball guru, Champ AKA The Global Man, was the first person to put me on to the magic of Marcus LoVett and hip me to his ready for Broadway ball busting.
“The special thing about him,” says Global Man “is he had to go to Chicago and adapt to a team that won back-to-back state chips. Not not only did he have to adapt to a winning culture, he had to adapt to a state that already had a winning program. He was embraced and liked by all of his teammates in the process. He was a leader and model citizen. He’s going to turn that place (St. John’s) out. He’s going to turn it out.”
We already told you LoVett was the best point guard in high school last season. Now St, John’s fans have a front row seat in watching him blossom into the best college point guard.
Mullin didn’t miss his mark. What an auspicious start for this era of St. John’s basketball. And you heard it here first !
79,554FansLike
15,283FollowersFollow
0SubscribersSubscribe