After defeating the Georgetown Hoyas in the the Big East Tournament yesterday, New York tabloids and bloggers alike were having a nostalgic flashback to St. John’s days of glory, days that are long gone. Back when the Big East was the Big Beast of college basketball, the Red Storm were always contenders.

Indeed, the scrappy city team from Jamaica, Queens was at the forefront of the Big East’s emergence back in the day, with players like Chris Mullin, Walter Berry and Mark Jackson. Unfortunately, the Red Storm program has fallen on hard times as of late. With the arrival of perhaps its greatest former player ever in Mullin as the head coach in 2015, there were hopes that the Johnnies could somehow muscle their way back to prominence, then perhaps dominance.

Waiting for them on the other side of the dark alley leading from mediocrity to resurgence was a menacing, top-seeded Villanova Wildcats team in the quarterfinals today in the conference tournament, rockin’ a motorcycle jacket and carrying a lead pipe in one hand and a switch blade in the other.

The Red Storm remained close early, with point guard Marcus Lovett providing most of the scoring punch with an array of step-back jumpers that were contested. He also used his ballhandling and quickness to get to the basket with relative ease. However, none of the supporting cast did anything to support him.

Freshman point guard Shamorie Ponds, a Brooklyn native out of Thomas Jefferson High School who has been sensational at times this season, shot 1-for-7 in the first half, including missing several bunnies from close with minimal defensive pressure.

It wasn’t until Federico Mussini entered the game at the 11:19 minute mark and drained several threes to bring St. John’s back to within 12 did someone other than Lovett make an impact on the game. But with the difficulties they were having with scoring the basketball, it was only a matter of time before the Wildcats’ experience and depth overwhelmed them.

This is the 35th year of the Big East Tournament at Madison Garden, and many were hyped today to see if St. John’s could get riled up like they did in last night’s tussle with Georgetown, but Villanova put an end to that speculation early and often.

If ‘Nova forward Kris Jenkins isn’t one of the smoothest scorers in college basketball, then I don’t know who is. He makes it look so effortless that you don’t even know he’s putting in work until you look at the stat sheet. He had 14 at the half, and Donte DiVincenzo came in to drop 15 off the bench on 4-of-5 shooting. 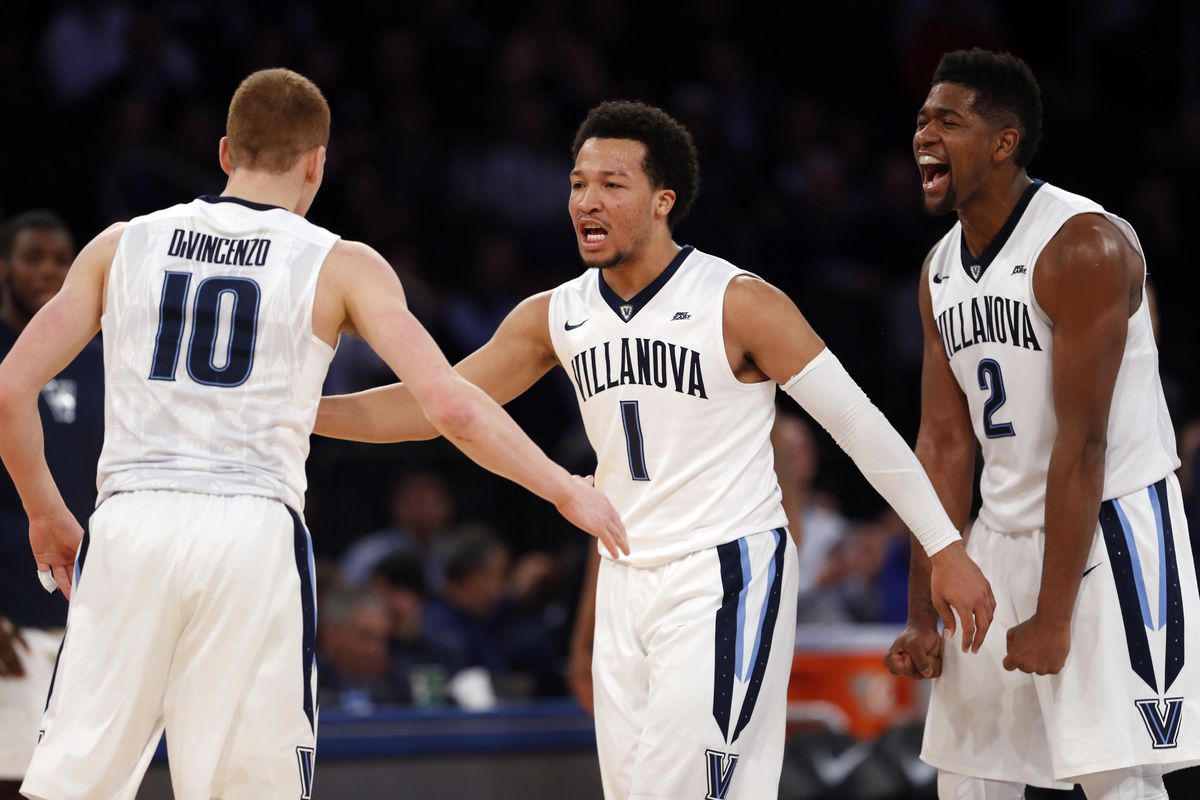 Meanwhile, other than Lovett and Mussini, no other St. John’s player had more than five points. The score at halftime was 52-26 in favor of Villanova. The Wildcats shot 51 percent from the field overall and 45 percent from behind the arc, seeming to score whenever they wanted. St. John’s couldn’t score at all.

The second half was more of the same.

DiVincenzo had 25 points and Jenkins added 24 in the Wildcats 106-67 beat-down of the Red Storm. Eric Paschall, Josh Hart and Jalen Brunson added 17, 15 and 14 points respectively for No. 2 Villanova (29-3), who had six players score in double figures and set team tournament records for the most points scored and the largest margin of victory.

They will face the winner of the Marquette-Seton Hall game in the semifinals on Friday.

Over the last several years at the Big East Tournament, we’ve heard coaches speaking of parity and how tough the league is. However, from what I can see thus far, Villanova reigns supreme, and no one else seems close.