The Connecticut Huskies womens basketball team and head coach Geno Auriemma have re-defined total dominance in college athletics. The squads 80-51 spanking of Oregon State in the Final Four was UConns 74th straight win, 23rd consecutive win in the NCAA tournament and they hold a sparkling 121-1 record during that period with every win by double figures.

The 29-point victory was the biggest margin of victory in womens Final Four history, surpassing the 28-point win by Tennessee over Arkansas in 1998.

The fact that UConn has been nearly invincible since Breanna Stewart, college womens basketballs first three-time AP All-American laced it up and imposed her will on the Storrs community, is old news. The fact that her lethal sidekicks Moriah Jefferson and Morgan Tuck are almost as good as Stewart is just downright frightening for Syracuse, who will make a surprise appearance in the National Title game after beating Washington 80-59 on Sunday night.

When they hit the floor on Tuesday night, UConn has a chance to put an emphatic exclamation mark on what has been the greatest four-year run in college basketball history. Head coach Geno Auriemma, the master psychologist, basketball mixologist and recruiting genius can pass the legendary John Wooden by winning his 11th NCAA Championship.

While Stewart is considered the LeBron James of womens college basketball, Tuck and Jefferson have undoubtedly been her Dwyane Wade and Chris Bosh. In fact, theres a strong possibility that these three players will go 1, 2 and 3 in the WNBA Draft, which would also be unprecedented.

Stewarts prolific play and the abundance of national acclaim has often overshadowed the brilliance of Tuck and Jefferson. On Sunday night, Stewart had a fluke terrible first half, scoring just three points. UConn didnt miss a beat as Tuck used her size, defensive intensity, three-point ability and overall court awareness to score a game-high 21 points (16 in the first half) and carry UConn to a huge halftime lead and a comfortable 64-41 edge at the end of three quarters.

Jefferson, the most unheralded of the three stars was voted the top point guard in the country the last two seasons. Her game was on full Final Four blast on Sunday night as she chipped in 10 points and added seven assists to become UConn’s all-time assists leader, passing Jennifer Rizotti. The guard, who Auriemma refers to as “Our Draymond Green,” controlled the tempo with flair and focus. 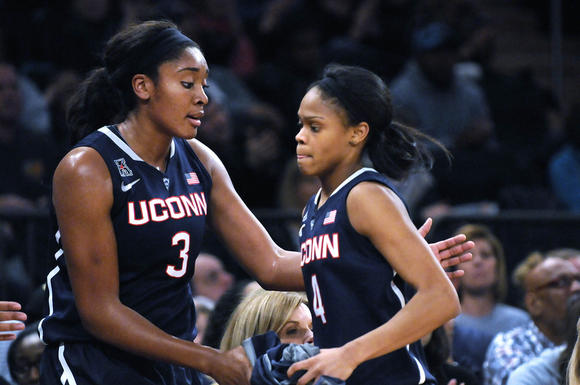 Say what you want about UConns dominance. Some cats like Dan Shaughnessy believes its bad for basketball. The numbers tell another story. I tend to agree with Auriemma who compares UConn to Tiger Woods back when he was making golf look like a man playing three-year old’s on a Put Put course. It surely doesn’t last forever and why waste time knocking the hustle.

Since that first National Championship in 1995, the Huskies have continued to ascend to new heights as a program. Nine titles later, they are looking to obliterate the ghosts of basketball past.  Chapter 1 in the book of legendary hoops programs now begins with UConn. It was done right. It was done legally and their popularity is still soaring.

Everybody loves a winner and Super Teams are proven to be big-time draws in every sport. According to John McTigue of ESPN, ratings for the first two rounds of the womens NCAA tournament were up 46 percent from last season. UConns 60-point blowout of Mississippi State was the most watched womens game of the Sweet 16 (0.76 metered market average). The ratings only went up for UConns victory over Texas in the Elite Eight (1.06). Also of note, the regular-season game between UConn and Notre Dame on Dec 5 (1.53 metered market average) out-rated the Pac-12 football championship (1.25).

Winning games at the Division I level in any sport is challenging. When a program can win at the ridiculous rate that UConns womens squad has over the past two decades, and singlehandedly enhance the popularity of the often-overlooked and undervalued womens game, all you can do is tip your hat because we may never see this again.

Chiefs And Ravens Set To Lock Horns In Baltimore