Tracy Wolfson is probably the most popular sideline reporter in the NFL. She has covered all of the high profile sporting events for CBS, from March Madness to Peyton Manning’s final on-field interview as he rode off into the sunset last season after defeating the Carolina Panthers in Super Bowl 50.

The Michigan grad got her start in television in 1997 as a researcher for CBS Sports. She worked on U.S. Open Tennis, the 1998 Winter Olympics and the 1997 Final Four.

In 2000, she began her on-air career when she joined the WZBN-TV station in Trenton, New Jersey as a sports anchor, reporter and producer. Wolfson then parlayed that into a gig as an anchor and reporter for the MSG Network and for ESPN from 2002-03 covering U.S. Open Golf, College Football and Arena Football.

In 2004, she got her shot with the big wigs at CBS and drained it. Shes covered the Final Four since 2004, and covered last year’s Super Bowl as part of the elite CBS broadcast team with Jim Nantz and Phil Simms.

Wolfson’s brilliant career is on a serious upward flow and she represents a strong, informed, professional and needed voice in sports media. The Shadow League got a chance to chat with the sultan of sideline reporting and pick her insider brain about this upcoming NFL season.

The Shadow League: How does it feel working another season as CBS’ lead NFL sideline reporter?

Tracy Wolfson: I love it. I cant wait. Coming off the momentum of the Super Bowl, its very exciting. You never know what the season is going to bring. What story lines. What teams will emerge. Its actually pretty wide open right now so Im looking forward to it.

Whats your take on Tony Romos back injury?

TW: It really pains me… No pun intended. Im a big fan of his. Hes one of the greatest guys to be around, hes great for that team. Hes a leader. Hes the face of the Cowboys and I really, truly hope he can be back on the field. And if anyone can get back out there as quickly as possible it will be him. 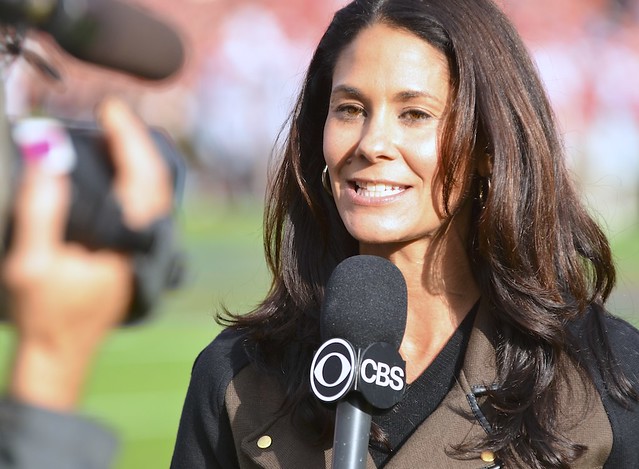 TSL: Having followed Robert Griffin III’s career from the beginning, can he be that electrifying, polarizing guy again in Cleveland?

TW: Why not? Manziel didnt work out and RGIII deserves another shot. This is his opportunity. He looked good in the preseason. Cleveland still has some work to do, but all they can do is go up right? So Im excited to watch him play.

TSL: What kind of working relationship did you have with Peyton Manning?  Will you miss him?

TW: Ive known him since Tennessee because I covered Tennessee, and I always come back and have been a part of that… so I feel like I had a good relationship with him. He was always gracious and always called you by your first name. He always gave you what you needed as a (reporter) and was honest with you. I feel so lucky to have had the chance to be around for most of his career covering him, especially those last few years and thats when I really came into the NFL.

TSL: What stands out to you in his illustrious career?

TW: To watch his rivalry with Tom Brady and to watch how he finished off his career in the Super Bowl, playing so well, and to be able to interview him in that last interview and see him go out that way…thats all I wanted for him was to go out on top like that, especially after the tough year he had, where at one point they weren’t sure if he’d even start the playoffs. Hes a great person and a really important part of the sport. 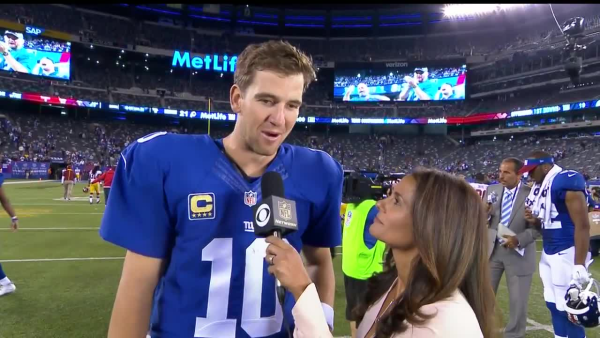 TSL: What about Eli?

TW: Well I live in the New York area so most people here think Eli is great. He’s different but in a great way. Different personalities. Id love to see the Giants do well and him lead them to another Super Bowl. You cant go wrong with either one.