By 2014, it seemed clear that Andrew Luck was the right pick for the Colts as they pondered taking Baylors slender yet incomparably dynamic dual-weapon RGIII instead of Stanfords pocket-passing bruiser with the first overall pick in the 2012 NFL Draft.

RGIII fell to Washington at No 2. He was a shooting star that faded into the D.C. night. Then he got hurt in that playoff game and the rest is history.

Although Russell Wilson rose out of the shadows in the third-round to become the first Super Bowl-winning QB of that heralded draft, which also produced current NFL starters Ryan Tannehill (Miami) and Kirk Cousins (Washington), Andrew Luck was considered the gem of the group. He was considered the total package and broke the record for most passing yards by an NFL rookie with 4,374, eclipsing Cam Newtons previous record of 4,051.

Luck and the Colts were riding a wave of optimism and social media sweat after going 11-5 while he passed for 4,761 yards and a league-leading 40 TDs in 2014 before falling to New England in the AFC Championship Game.

Many football experts predicted a Super Bowl appearance in 2015. However, the wheels fell off of the Colts gravy train due to Indy executives failing to improve the personnel and Luck trying to be Superman.

Luck was chased, bruised and battered into an early submission. He suffered an injured shoulder early in the season and then a lacerated kidney and a partially torn abdominal muscle that knocked him out for good, as the Colts finished 8-8 and failed to make the playoffs for the first time in Luck’s career.

Andrew didnt play as intelligently as he should have last year. He is a smaller version of Ben Roethlisberger, but he plays like Ben Roethlisberger and thats the problem, former New York Jets Quarterback and radio celebrity Boomer Esiason told The Shadow League.

All of a sudden, the narrative started changing about Luck. The perception of this golden-armed superstar went from the next John Elway to a young Brett Favre with all of the ego and erratic decision-making of the Packers celebrated Hall of Fame QB, but without the playoff success.

He plays too reckless, Esiason flat out told TSL. I dont see the Colts as a playoff team no matter how good he is because I dont think their defense is good enough.

Former NFL QB Rich Gannon says Luck, who has 101 career TD passes and 55 picks, has got to take better care of the football.

He has been very careless, Gannon, a four-time Pro Bowler with the Raiders (1999-2002) tells TSL. The turnovers have been a real problem for him. That’s got to get corrected and hes got to do a better  job not taking the unnecessary hits that hes been taking. Hes got to throw the ball away a little more.

If Luck was in the NBA, hed be compared to a Carmelo Anthony or Allen Iverson; awesome talent who plays hero ball a little too much, but he does it because the surrounding parts are suspect.

Owner Jim Irsay, general manager Ryan Grigson, and head coach Chuck Pagano have all dropped the ball in accessing talent that can elevate Lucks game. Grigson has neglected the offensive line until drafting center Ryan Kelly in the first round this spring, and has allowed the defense to erode, leaving Luck to sling, fling and flee like he is in the Wild Wild West. 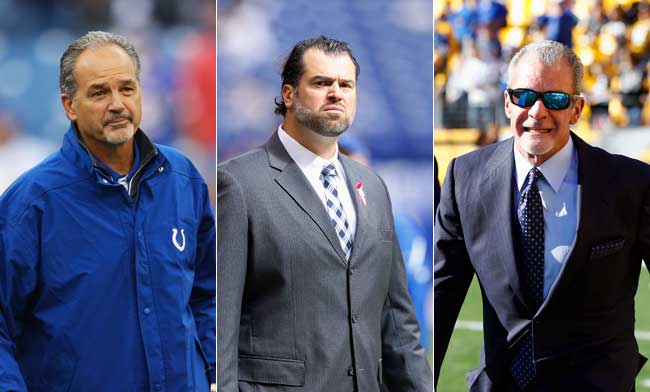 Frankly, from an organizational perspective, said Gannon, they have not done a good enough job of protecting him up front with the personnel and the running game. So, I know that’s been a point of emphasis. Hes a very talented player. A smart guy, but theyve got to get better. They are in a division where Jacksonville is going to be improved and the Houston Texans will be better…its not going to be easy. I am glad hes healthy and hes back.

All of that unstoppable love Luck was getting just two seasons ago, has turned into shakes of the head when discussing his current situation. Its kind of weird. Complimentary adulation about skills are often followed by criticism of his approach and his teams talent level.

Even Dan Fouts had to be brutally honest with me when discussing the prospects of the Colts team and their young QB,  who is now the highest paid player in NFL history after signing that $123 million contract in June with $87 million up front.

It all starts up front on that offensive line, said the Chargers legend and CBS football analyst. And Lucks offensive lines not been very good and that affects the running game and the passing game. Until they get that squared away its going to be difficult (for the team to have any real success).

The wheels of greatness turn ever so swiftly in the NFL. Future legends become yesterdays news, even in the prime of their careers. Luck should be battling for a championships right now. Hes got the goods physically and mentally. Instead, hes Patrick Ewing and Barry Sanders with a weak supporting cast, hoping that the front office makes a miracle occur.

At least Luck will play more than nine games this season, but chip-checking will still be a long shot in the eyes of most prognosticators. Making the playoffs, however, would make 2015 and this brief fall from grace a mere memory in an otherwise illustrious career when its all said and done.